We recently had the opportunity to travel to Mendoza, Argentina along with one of our favorite Texas wineries, The NICE Winery located in Houston, Texas. If you are a frequent visitor to Texas wineries, you may not have heard of them yet unless perhaps you came across their wine in stores like HEB, a wine festival/signing, or in a high end restaurant.

The NICE Winery is owned by Ryan Levy and Ian Eastveld and they are also the winemakers. Their first wine vintage was 2007 and they opened the winery in 2009. All their wines right now come from Mendoza and California. They do not ship juice or must and then make it in their Houston winery, but instead travel to the specific regions and make their wine there and the finished wines are shipped back to Houston. They frequently travel to Mendoza to check on the progress of their wines and in March planned to go to Mendoza for harvest.

Ryan and Ian decided to invite wine club members to join them in Mendoza to enjoy the experience. When they were first thinking of the trip, Gloria and I said immediately we would like to go. Later when the trip was definitely happening, they provided details of three full days in Mendoza and we were allowed to make whatever other plans we wanted while in Argentina. One of the things we have wanted to see is the beautiful Iguazu Falls so we arranged our trip to visit the falls.

In order to get to Mendoza, you first need to fly into Buenos Aires, an overnight flight from Houston. We planned on spending one night in Buenos Aires before leaving for Mendoza. Also on the plane were wine club members Mike and Carol Barry. We both went to separate hotels and later met for dinner followed by a tango show at La Ventana. The next day Mike and Carol had an early flight to Mendoza and Gloria and I took a private city overview tour. We then spent time shopping. One of the noted items to buy in Argentina is leather goods and Gloria had already researched where to go. We ended up buying a total of five leather jackets. Because the jackets are made right there, we were able to ask for modifications and they would custom make the jackets for us. We would pick up the jackets on our way back through Buenos Aires before heading home. Here’s a tip which we wish we knew before the trip. If you are considering buying any leather goods, bring U.S. dollars to pay cash for them. The leather factories have to pay for leather in U.S. dollars and they give a higher currency rate exchange to pesos than banks and other currency exchange locations. This also holds true for most other goods you may buy.

When it was time to go to Mendoza, we went to the domestic airport where we met Ryan and Ian along with Ryan’s parents Jerry and Gail Levy. We took the same flight as them to Mendoza and upon arrival at the airport we were picked up by Ryan and Ian’s friend and guide Ivana Basualdo in the bus we would be using during the week. We traveled to our hotels in Mendoza city and our Houston group of eight people was now in Mendoza. 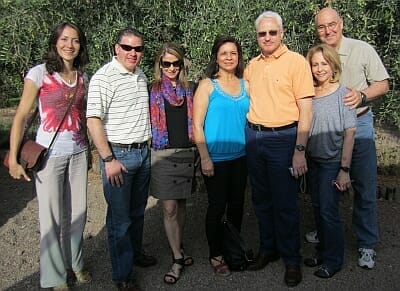 On Tuesday we traveled to our first winery and learned about Mendoza along the way. According to our tour guide, the Mendoza province is 148,827 square kilometers and there are 18 districts in Mendoza. Mendoza became well known for its wine industry around 1990 and 70% of the wines in Argentina come from the Mendoza province.

When you are in Mendoza the Andes Mountains are in the distance making for a nice background. There are some mountains which are visible with snow and they are that way all year. We learned the rainfall in Mendoza is low and to supplement the lack of rain, they use the Andes mountain snow runoff to provide water for irrigation. The Huarpe Indians developed the irrigation system originally for Mendoza. In Mendoza city itself there are a number of trees but none of the trees are native to the city. Irrigation canals were built in order to provide water for the trees. The city has a 746 meter elevation and is 200 kilometers to the border of Chile. 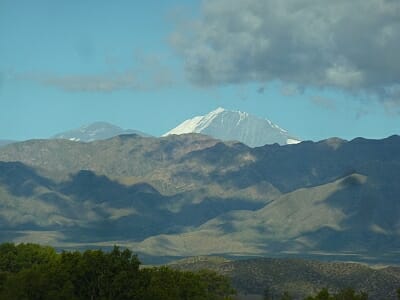 While driving we saw many vineyards and some were covered with bird netting which is commonly seen in parts of Texas to prevent birds from eating the grapes. However we learned the other reason they are used in Mendoza is to protect the vines from hail. There were two types of netting seen, the kind that covers the vines tightly like in Texas and another which is more like a canopy over the vineyard. Not all vineyards had the netting and we were told the reason was because they were very expensive. It made us think of our visits to the High Plains of Texas vineyards where netting is not used. Since hail is a concern in the High Plains, netting the vines to protect from hail seems logical however the expense may be a reason why it is not done. Also done by some of the wineries is to have rockets of silver nitrate shot into the clouds to suppress the hail.

Harvesting is usually done from February to May depending on the grape variety. A lot of wineries are just producers and are not available for tourists to visit. The ones which are available prefer appointments so they know when to expect people and also have a guide available who speaks the correct language for the people visiting. There are often security guards and gates at the entrances to let you in.

The first district we would be visiting during our stay would be Maipú which has an elevation of 759 meters. The first winery we visited was Alta Vista Winery. We have had some Alta Vista wine in the United States so it was interesting seeing the winery which was located in another country. Alta Vista Winery is considered a medium-sized winery in Mendoza. 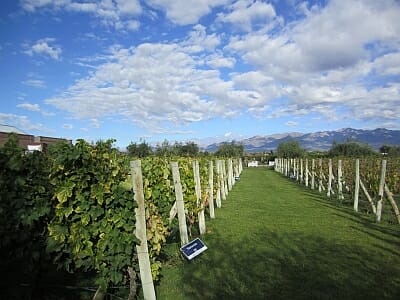 Alta Vista Winery is owned by French owners who came to Argentina looking for Malbec and founded the winery in 1997. In fact the office of the French Consulate in Mendoza is located in the winery. Alta Vista used to concentrate on quantity but quality is now the preference.

We took a tour similar to other winery tours where you visit the production room with tanks, barrel room, and eventually a tasting. The first thing we learned was many wineries in Mendoza which are not brand new use concrete tanks instead of or in addition to stainless steel tanks. The concrete tanks are lined with epoxy which keeps the fermenting wine from entering the concrete. Alta Vista Winery has both concrete and stainless steel tanks and they use the concrete tanks for both maceration and fermentation of their special reserved wines. Alta Vista produces 200,000 bottles a year (greater than 16,000 cases). 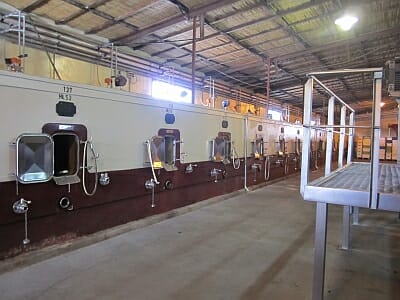 Alta Vista has six vineyards which they use for single vineyard wines and also for blending. They had not started harvesting yet at the time of our visit but expected to by now.

It was time for a tasting and these are the wines we tasted:

On our way out of the winery we saw the tasting room where professionals come to do tastings, complete with tasting sinks. One person commented it looked similar to a dentist’s office.

The next winery to visit was Ruca Malén Winery. Ruca Malén is also considered a medium-sized winery producing 700,000 bottles a year (greater than 58,000 cases). Ruca Malén Winery is also owned by French owners who started the winery in 1998. 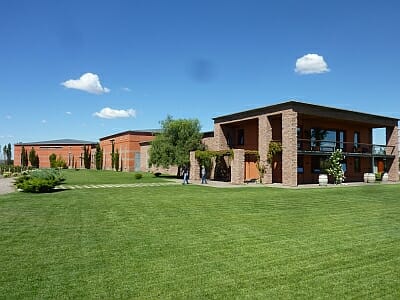 We had a tour similar to the tour at Alta Vista Winery. There are 21 hectares of vines in the vineyard. A hectare is a measurement of land where 1 hectare is equal to 2.5 acres. The vineyard does not use drip irrigation but instead uses flood irrigation. This relates to the previously mentioned irrigation using the mountain runoff water. The water is held by dams and when the dams are opened, the water runs along canals usually beside the roads. Vineyards have their own gates which they can then open to flood the base of their vineyards.

Ruca Malén gets their Torrontés from a northern vineyard where it grows better. They harvest Chardonnay first starting in February. Ruca Malén uses mostly French oak barrels but also some American and Hungarian oak. One interesting note was they use a mobile bottling line similar to what some wineries are using in Texas instead of having their own dedicated bottling line set up at the winery. The winery exports 60-70% of their wine. The bottles are not labeled initially because when it is determined where the bottles are going, i.e. United States, Europe, and so forth, the correct language label is then placed on the bottles. 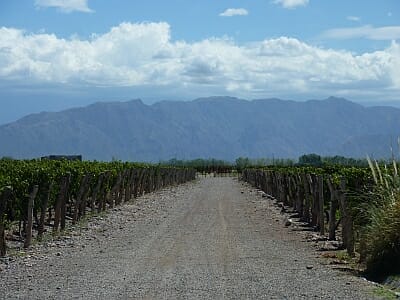 Following the tour was lunch at the winery outside in a roof covered dining area but open on the sides. The weather was great and it was an incredible view being surrounded by the vineyards with the Andes Mountains in the distance. One thing we soon learned is when you travel with two chefs turned sommeliers/winemakers, you are going to have the best meals. The five course lunch was a fine dining meal with each course paired with a wine from Ruca Malén Winery. It was a fantastic meal. 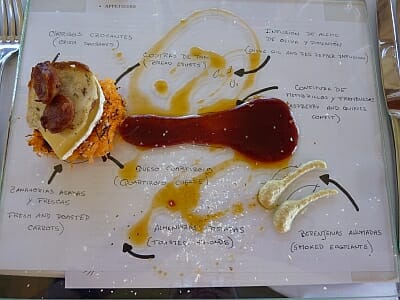 These were the five courses: 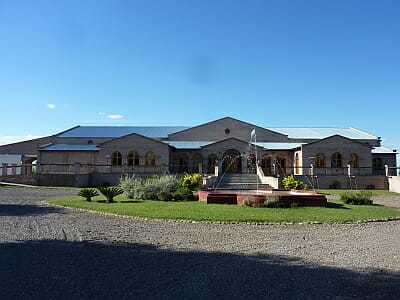 We were all full from the meal and headed next to the last winery of the day, Otero Ramos Winery. Ryan and Ian make their Sauvignon Blanc and Testamento Cabernet Sauvignon at this winery. Testamento is another label for The NICE Winery. We met owner Manual Otero Ramos’s daughter-in-law Fernanda who gave us a tour of the winery. They do not buy any grapes but use all estate grapes. There are 32 hectares of property with 30 hectares of vineyard. We toured the lower floors and saw where they age the wine in the bottles. Since they make reserve wines, the bottles need to be laid down for aging. Many bottles lined the walls and other areas. I am not sure if it was just coincidence but workers were preparing the NICE Winery boxes ready to be filled later with bottles of wine. Concrete tanks are also used at Otero Ramos Winery. The winery produces around 120,000 bottles of wine a year. 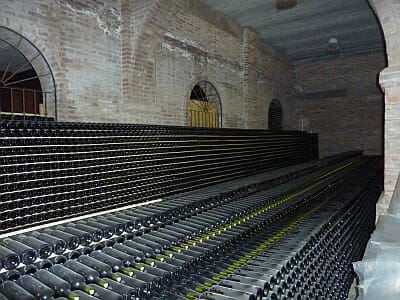 After the tour we met owner Manual Otero Ramos along with his daughter Roxana before we began a tasting of their wines. We were seated around a large table when we tasted various wines from Otero Ramos Winery. 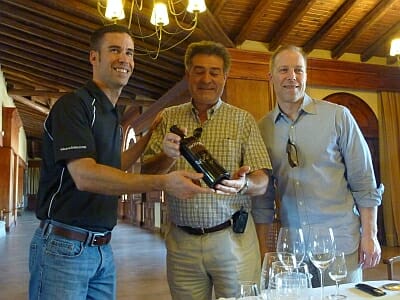 These are the wines we tasted:

Since Ryan and Ian have been working with the Otero Ramos family for a while now, you could see how they were treated like family with the hospitality given. Everybody had an enjoyable time at the winery and felt very welcome.

We arrived back in Mendoza city and after a brief break, we all went to a restaurant which Ryan and Ian had made reservations and we ate outside in the nice evening air. The wonderful meal was a great way to end our first day in Mendoza.

We couldn’t wait until Day 2 and Day 3 of our trip to Mendoza.