Lavaca Bluffs Vineyard and Winery is located in Lolita and is owned by Doug and Beth Reed. In 1998 they purchased the Frels Landing homestead and first planted grapes in 2006. The winery was opened in May 2011.

I had wanted to make the trip to visit for a while but my available timing never coincided with the winery’s open hours. Finally, the chance came and after confirming with Doug Reed that the winery was going to be open, I made the trip south. We have some friends who go fishing in Matagorda Bay and I learned Lavaca Bluffs is on the way to the Bay.

If you want to visit Lavaca Bluffs Vineyard and Winery, print out the instructions from their website. Do not follow your GPS as it will want to take you in the other direction from where the winery is located. I trusted the website’s instructions and as soon as I found the winery, I set my GPS to the correct location. 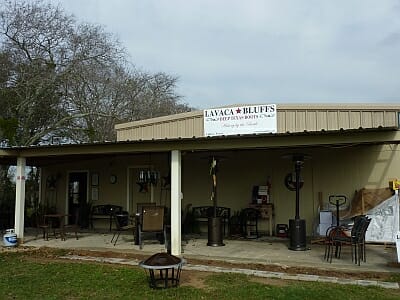 Doug Reed greeted me at the front of the winery which is located next to their house. He was cleaning up from a strong windstorm that had recently passed through. Doug directed me inside the winery where he turned me over to Jennifer who would guide me through the tasting while he finished cleaning up. 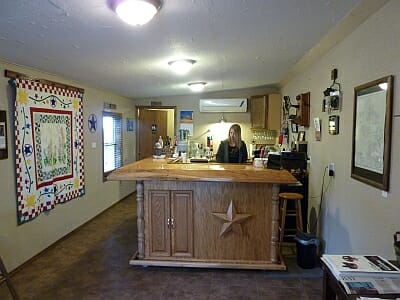 Tastings are done while standing at their tasting bar. As I learned later, the gorgeous L-shaped tasting bar was a gift from a friend who had made it from discarded pieces. For example, the top of the bar is actually from an old bowling alley. There is a tasting fee for five wines. For a higher fee, you can taste all the wines available. At the time of my visit, there were nine wines available which were less than they usually have but there had been such a demand for some wines. The tasting fee also includes the wine glass.

Since I was the first visitor of the day, Jennifer had to start uncorking some new bottles. She started pouring my tastings from the bottle and I quickly learned she was an excellent guide in the history of the area. Lavaca Bluffs bottle labels are named with historical or geographical descriptions from the area and include a vintage photo for the wine’s name. They make their own labels which look fantastic.

As mentioned, each wine has its own historical reference and Jennifer gave a very interesting history lesson of the area for the particular wine while doing a tasting. I never thought learning about the history of a convent would be interesting but the tale Jennifer wove made it so. This was also true for each history given behind every wine’s name.

Lavaca Bluffs uses 70% Texas grapes in their wine including grapes from the estate’s vineyard which includes Lenoir, Blanc du Bois, and Mustang grapes. In addition to the grapes are fruits such as peaches, pears, mulberries, and blackberries. The Cabernet Sauvignon grapes come from the Lodi region in California. They have tried to get Cabernet Sauvignon grapes from Texas but all the vineyards have been contracted out to other wineries. Their Merlot grapes come from Palacios Vineyards in Brenham, Texas. 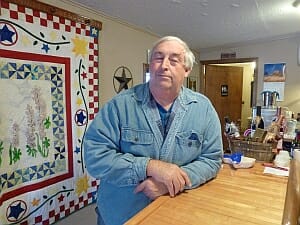 A small gift shop is present with jams, clothing, and of course their wine. What is available for tasting and buying varies because the demand for the smaller quantity of wine produced is very high. Besides the winery, Lavaca Bluffs wines can be found at five local liquor stores. Lavaca Bluffs produced 500 cases of wine their first year and 1,000 cases in 2012.

Also available for tasting is fresh sangria, both red and white. I have never tried white sangria but it was great in addition to the red. The sangria is made every day and as I wondered in my mind, Doug answered my thought in that many people have said he should bottle it. The problem is since it is made with Ginger Ale, it is not really conceivable to bottle.

Doug gave me a brief tour of the property along the Lavaca River and their current plans for expansion. I said goodbye to Doug and thanked him for an enjoyable visit. I would recommend visiting Lavaca Bluffs Vineyard and Winery when you are in the area.