John Matta, owner and winemaker of Castello Vicchiomaggio in the Tuscany region in Italy, was recently in Houston to introduce some of his wines. Matta has been the Italian Winemaker of the Year presented by the International Wine and Spirit Competition (IWSC) in 1997, 2002, 2005, and 2010. I was fortunate to be invited to The Tasting Room at CITYCENTRE to meet Matta and taste his wines. 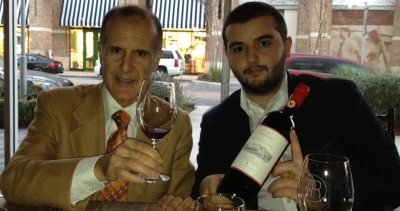 We met Matta and his son Sebastian before the tasting started. They had been on a tour of the United States and the last city they were visiting was Houston. When you first think of an Italian winemaker, you probably would assume a strong Italian accent but you would be wrong in Matta’s case. He was born in England to an Italian family so he speaks with an English accent. His family purchased Castello Vicchiomaggio in 1964, and John Matta along with his wife Paola have been running the estate since 1982, and it now includes a small hotel inside the castle.

Matta prefers to make his wines with limited oak. The oak he does use is small or large French barrels, never new, just to smooth the tannins. There are multiple vineyards at the estate from which Matta gets his fruit.

We were able to taste five wines and had a peek at a sixth. 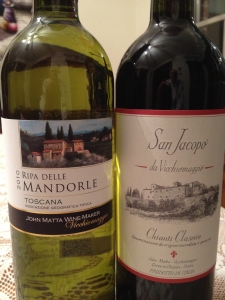 2010 Ripa delle Mandorle Bianco – Toscana: 85% Trebbiano and 15% Chardonnay. Matta said the Trebbiano needs something to blend with it and he chose Chardonnay. This was the only white wine in the tasting.

The next three wines were Chianti Classico, each a little different and for a different reason. 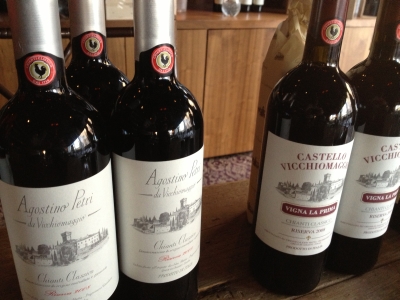 The last wine we saw was one of the last four bottles available in the United States, a 2007 “FSM” Federico Secondo Matta. The FSM was named after Matta’s father and is 100% Merlot. The wine comes in a box along with a certificate. Since there are so few bottles left, obviously the price is not inexpensive and it was not available for tasting.

I enjoyed meeting John Matta and especially the tasting of his wines.