Gambero Rosso recently presented in Houston for the first time its Italian Wine Tales. This event was to show “the fascinating appeal of Prosecco Superiore and the timeless elegance of Vino Nobile. I was fortunate to be invited to this event and was able to bring Gloria, the photographer and my significant other.

There were two seminars held on sparkling Prosecco and Red Tuscan. During and after the seminars there was a walk around tasting with the room divided in half. One side presented Proseccos and the other side presented the Vino Nobiles.

Since the side of the room with the red wines had more people tasting and Prosecco often finds its way into our house, we visited the Prosecco side first. The best quality Prosecco identified with the DOCG (denominazione di origine controllata e garantita) is obtained in the Veneto Region of north-eastern Italy in the hills between Conegliano and Valdobbiadene. There were 16 wineries presenting their variations of Prosecco. Some tables had representatives from the wineries and other tables were manned by local servers. We navigated our way to the tables with the representatives. 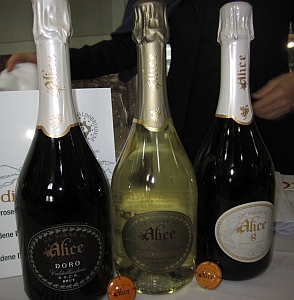 We talked to some other attendees we knew and they said the table with Le Vigne di Alice was very good so we went there first. They had three Proseccos with two being made in the traditional style and the third made by fermenting the wine in the bottle. We decided to try the fermented version first, the Prosecco Superiore Alice .G. It definitely had a different taste than other Proseccos we have had in the past. We then tried the two other wines, a Brut and Extra Dry. I personally liked the 2011 Extra Dry while Gloria preferred the 2012 Brut.

We tried the three wines from Mionetto and learned that vintages for Prosecco are not common but they do exist. For example the first wine we tried from Mionetto was the Prosecco Superiore Brut Rive di San Pietro di Barbozza Mill 2011. This had 6 grams of residual sugar per liter. We learned that when making Prosecco, it is not kept in contact with the yeast whereas Champagne wants to be in contact with the yeast. The second wine was the Prosecco Superiore Extra Dry with 17 grams of residual sugar per liter. The grapes came from 25 vineyards which started in 1887. We ended the tasting of the Mionetto wines with the Superiore di Cartizze Dry which had 25 grams of residual sugar per liter. The fruit came from 250 acres in the hills.

The Red Tuscan seminar had started and since the side of that room had cleared out a bit, we headed to the red wines. The Vino Nobile is the first wine in Italy to bear the DOCG seal of quality and is made in Montepulciano. Wine lovers consider the Vino Nobile made from Sangiovese grapes among Italy’s best wines. There were 13 tables for the wineries with Vino Nobile. 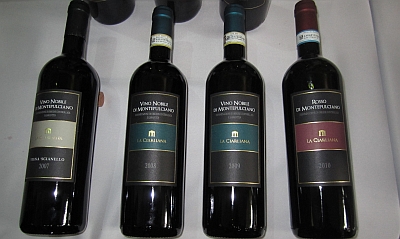 We tasted more Vino Nobiles at other tables and all were excellent. The seminar was ending and since people were filling up the side of the room where we were, we headed back to the Prosecco side to find any we missed. 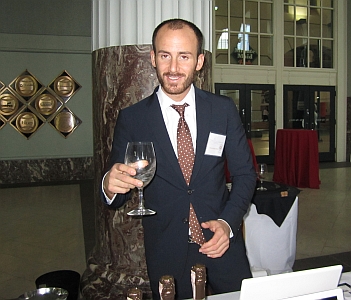 One interesting table was from Tenuta degli Ultimi. Presenting the wine was Sebastiano Ricci who is one of the founders of Tenuta degli Ultimi. It was his first time in the United States and he was enjoying his visit. Gloria knows a little Italian so she conversed with him a little, but he has no problem speaking English. He explained how he was the youngest of 11 children and other siblings participate in the winery. He had one wine which was the Prosecco Superiore Extra Dry Sanguefreddo and was very good. They currently do not have any importers in the United States but are looking for one.

The Italian Wine Tales event was very educational and it was nice to taste such excellent wines and hear some tales.