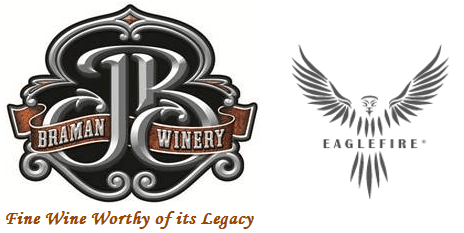 Joe Braman, CEO of Braman Brands, and Chris Caldwell, President and Winemaker of Eaglefire Winery, are pleased to announce a merger of winemaking operations, which will take effect on February 15, 2013.  The merged company will operate under Braman Winery.

This merger represents pooling of the expertise of two wineries in an effort to develop and produce premium quality wines under both the Braman Winery brands and Eaglefire brand.  Braman Winery, formed in February of 2010, has several established brands, including Sparkles, Fringe Benefits, and B10 Series.  The company’s focus has been wholesale and retail distribution of wine handcrafted through custom crush facilities.  Eaglefire Winery, also formed in 2010, has focused on the art of winemaking and production of premium Texas wine.  Eaglefire has accumulated numerous awards including a Gold Medal at the 2011 Houston Livestock Show and Rodeo for Eaglefire Texas Muscat Blanc.

The merger allows both companies to utilize each other’s strengths in order to focus on the growth of the Texas wine industry and associated demand.