There are many fun and educational things you can get involved with at wineries besides just doing tastings. There are the common harvest festivals where you can usually stomp grapes but there are other events you can participate in. If you follow wineries on Facebook, Twitter, their website, or subscribe to their emails, you will find out about other events.

We have helped a couple wineries bottle wines before and that was interesting learning the process. One thing we had not done was during the beginning stages of the grape growing season and that involved pruning. We saw Bernhardt Winery was offering different weekends where people could participate in pruning so we signed up for one weekend.

Often in small wineries volunteers are needed to help with the various tasks like pruning since it is time consuming. Bernhardt’s pruning session cost $30 but it was going to include lunch and wine tasting. The schedule was given in advance which was to teach how to prune, actually do the pruning, and then have lunch. It turned out to be much more.

16 people joined owner and winemaker Jerry Bernhardt and Ron Saikowski, wine writer, who both oversaw the day’s activities. Before we arrived we were wondering why the teaching how to prune was going to take 90 minutes and then we learned why. Jerry taught much more than pruning and also gave factors to consider and how to actually plant a vineyard. 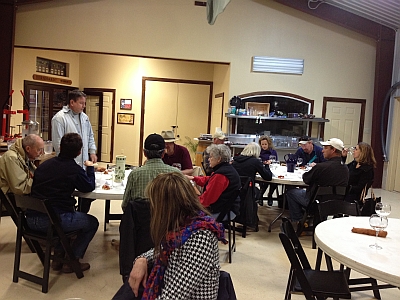 There is a lot of planning needed in order to consider planting a vineyard beyond just deciding what type of grapes to grow. Jerry gave a history of the start of Bernhardt Winery with the planting of their vineyard. At the time in 1998 only Messina Hof Winery and Haak Vineyards & Winery was nearby from which he could obtain information.

Jerry and his wife Jerri decided on a location in the country for the winery and vineyard and then had to consider the layout of the vineyard. Usually the grape vines are planted north to south to obtain the most sunlight but they also had to take the wind into consideration. Jerry decided to plant the rows 10×6 which means the rows are 10 feet apart and the grape vines are 6 feet from each other. The trellis system to use then had to be decided and he decided to place the top cordon wire which holds the canopy of grape vines at eye level. This makes managing the vines easier instead of needing to bend over. There were many other interesting items involved with growing a vineyard.

It then came time to show us how to prune. First we were given large grape vine cuttings and we were taught how to create our own small cuttings from those which we could then take home. Watch out for our Blanc du Bois grapes in the future! We were then shown how to prune a vine which in the end almost looks like it was butchered but the grape vines end up growing very fast during the year. The purpose of pruning the vines is to limit the grape production which sounds like the opposite of what you would want, but by limiting the amount of grapes on a vine better quality grapes are produced. 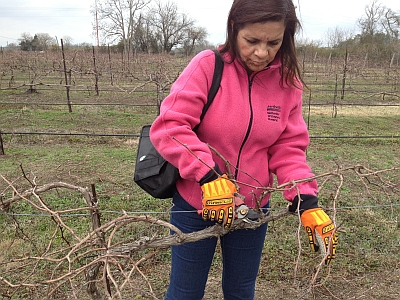 We then headed out to the vineyard to put what we learned into practice. Two people were put on each side of a row and the pruning began. While trying to determine which parts of the vine needed to be pruned, Jerry and Ron walked among the rows offering advice. Pruning is not difficult but consideration needs to be taken in order to hopefully get the best grape production from the particular vine. 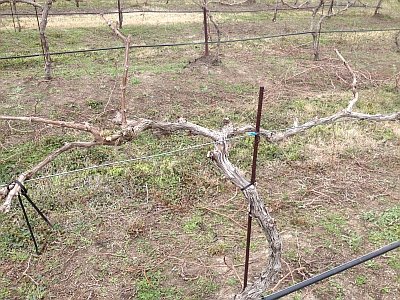 After we were finished pruning we all sat down to a nice lunch. Six different Bernhardt Winery wines were tasted during lunch. There were four white wines: 2011 Estate Blanc du Bois, 2011 Blanc du Bois (Sweet), 2011 Pinot Grigio, and 2011 Pinnelli. There were then three red wines: 2010 Cabernet Sauvignon, 2010 Merlot, and Crimson. After the tasting of the Cabernet we were treated to a tank tasting of an unoaked Cabernet Sauvignon. Jerry is still trying to decide what to do with the wine as it tastes great right now.

It had been a fun and educational experience pruning at Bernhardt Winery and afterwards we determined it was definitely worth the fee with the extra knowledge learned. They will be having two more pruning seminars coming up if you are near Bernhardt Winery. They will be held on February 23rd and March 2nd. Please check their website for details if you are interested.