I had a great time at TWGGA’s Grape Camp last year so I had to attend the conference. Gloria joined TWGGA and unfortunately since the conference was held from Thursday to Saturday and we work during the week, we could only attend on Saturday. Saturday morning’s schedule included just the large exhibit hall being open. As we registered we immediately started seeing people we knew. Besides the excellent seminars and exhibits, the next best thing is the social networking which takes place at TWGGA events. 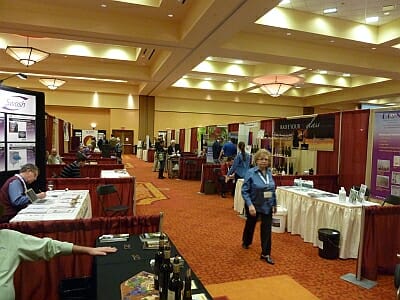 We began touring the exhibits which included seven aisles among all the booths. There was a lot of variety among the booths including items of interest for wineries and growers. We took interest in the new Texas winery passport program which will be offered in July sponsored by TWGGA. The old passport program which was sponsored by the TDA (Texas Department of Agriculture) required the use of paper booklets to collect stamps from the wineries you visited and later entered them on their website when you got home. The new program will be using smartphones, both Androids and iPhones, to enter the information while you are at the winery. Wineries have to be members of TWGGA and sign up to participate and currently they have 50 wineries signed up.

After lunch there were various seminars one could select from to attend. The first seminar I attended was “Detecting and Recognizing Wine Problems” presented by Dr. Brent Trela from Texas Tech University. It has been a long time since I took Chemistry in high school and the majority which was discussed included chemical terms and symbols, so the presentation was challenging for me. However noted winemakers also attending the seminar such as Paul V. Bonarrigo from Messina Hof and Jim Evans from Lost Oak Winery were asking good questions to Dr. Trela. We then got to smell many examples of faulty wines and could see what caused the fault.

The next seminar I chose was “Profitability and the Cooperative Winery Model” presented by Mike Sipowicz from Texas Custom Wine Works. It was an interesting presentation starting with the different types of entities including a bonded or independent winery, bonded wine cellar (not allowed in Texas), and a custom crush producer. It was explained that a custom crush producer was a bonded winery that produces wine for someone else. This is the easiest and most cost effective way to enter the wine industry. Mike then explained how his company Texas Custom Wine Works would be operating soon in the High Plains. There was interest among the attendees as questions were asked and I personally believe they have a model which will be very popular and fill a void in the Texas wine industry.

It was now time to get ready to attend the evening’s Gala Dinner and Auction entitled “New Moon Rising.” It started with an hour reception where two sparkling wines from Brushy Creek and Cross Timbers were offered and bidding could be done on silent auction items. People traded in their blue jeans and cowboy boots for suits, tuxedos, and other formal wear. When the conference started on the first day, new President of TWGGA Ron Yates from Spicewood Vineyards welcomed everybody. We were able to meet Ron Yates during the reception. 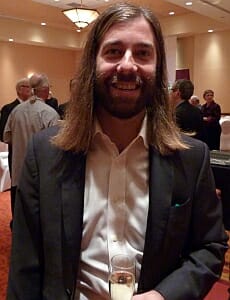 The dinner then took place and what a dinner it was. I have never had a five course dinner with two wines paired for each course. Each course was excellent and of course the wines were also excellent. The wines came from wineries Brennan Vineyards, Pedernales Cellars, McPherson Cellars, Spicewood Vineyards, Landon Winery, William Chris Vineyards, Brushy Creek, Enoch’s Stomp, and Georgetown Winery. 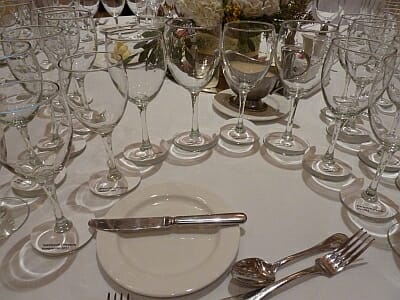 During dinner various activities occurred. The John E. Crosby, Jr. Lifetime Achievement award was presented to Paul V. Bonarrigo from Messina Hof for his 35 years of service to the Texas wine industry. Wife and co-owner of Messina Hof Merrill Bonarrigo presented a fun slideshow with photos of Paul Bonarrigo starting when he was young up to present day. 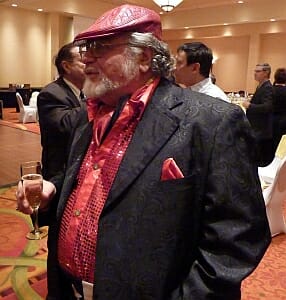 A live auction of ten items which were donated and where Paul Bonarrigo acted as auctioneer was held. Most items were of interest to wineries and growers, but there was an 18K gold emerald cut sapphire ring which Gloria said was very nice. Paul started the bidding on the ring at $1,000 and nobody was bidding. I decided to get the bidding started and this was when a little excitement happened. There were helpers throughout the room identifying bids for Paul and Gabe Parker from Homestead Winery was helping near us. He identified my bid but somehow, perhaps other bids came in on the other side of the room, suddenly my bid was $1,800! Gabe was standing behind us and I said if that bid holds up, I would like a case of his wonderful sherry as we all were laughing and I was holding my breath. There was a brief silence as Paul tried to get other bids and then somebody went to $1,900. Whew, time to breathe again.

After dinner the band Exit 277 started playing and the dance floor was filled as people enjoyed the dancing. In one corner of the room, extra wines from the dinner and additional wines were presented along with cheese and fruit.

It was our first TWGGA conference but it definitely won’t be our last as we had a great time.