We have always loved the Sister Creek Vineyards Muscat Canelli. The Italian style wine with its slight carbonation is the closest wine to Moscato d’Asti we have found in Texas. Sister Creek makes two versions of the Muscat Canelli, one which you can find at wine stores and a Reserve Muscat Canelli which can only be bought at the winery.

Some years do well for Sister Creek in getting Texas grapes and the labels proudly display the Texas word on the label (at least 75% Texas grapes) whereas other years out of state grapes are used providing a For Sale In Texas label (between 25% and 75% Texas grapes). 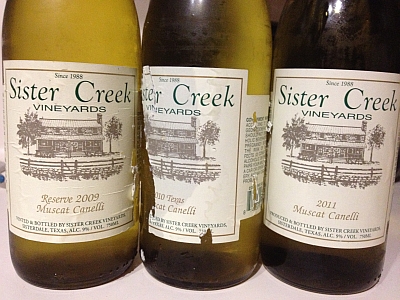 It was time for the blind tasting and we had purchased three bottles of the Sister Creek Muscat Canelli. They were a 2009 Reserve, a 2010 Texas non-Reserve, and a 2011 non-Reserve. Our wine cooler had a little problem holding the bottles for some reason so please excuse the labels in the photo which got a little torn from removing. I need to get better at taking photos of wine bottles because they were all the same color, although in the photo the ones on the right look darker, but that is because there were dark items behind the bottles.

Using the old aluminum foil blind tasting method, I uncorked the bottles and then wrapped them. I didn’t bother removing the capsule foil since all bottles looked the same. After rearranging the bottles, I left the room and Gloria then picked an order to bring to us to taste. Since it was only the two of us doing the blind tasting, it was not really necessary to mark the bottles.

The order of the bottles tasted coincidentally were 2009, 2010, and 2011. During the tasting it was very, very difficult to determine any difference between the wines, either with the bouquet or the taste. That is a good thing when it comes to wanting to make sure different vintages of a wine taste the same for the consumers.

The first wine (2009) to me tasted a little more fruit forward so I thought it might be a newer wine. Gloria also detected the same thing. The rest of the wines were too close to tell apart initially. After the third time of sniffing and tasting, I thought the second wine (2010) was slightly different than the others so I guessed that was the Texas wine. 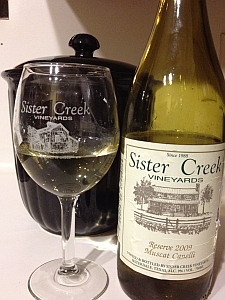 We enjoyed the tasting and of course, someone had to drink the three bottles of wine in the days following which was not a problem at all. We did prove one thing doing the tasting though. Unless we picked a wrong vintage, the Sister Creek Reserve Muscat Canelli is not that much different from the non-Reserve, so feel free to buy that Muscat Canelli in the stores. But also if you’re near Sisterdale where Sister Creek Vineyards is located, definitely stop by and pick up a Reserve to do your own tasting!

Interesting. It’s been about two years since I’ve had their muscat canelli, but there was no doubt to me that the reserve was much smoother in texture(thinner) and less “sticky” sweet. I really enjoy the subtle carbonation in both.

Gloria definitely thought there was a difference too which is why I wanted to set up the blind taste test. Next time we’ll compare the non-Reserve vs. Reserve from the same vintage. Perhaps that will definitely show a difference.