Gloria and I decided to do something for this past New Year’s Eve instead of sitting at home so the decision was made to attend Messina Hof’s Winter Wonderland New Year’s Eve Celebration. Wine friends Laurie and Shelly Ware from Cleburne decided to join us.

Laurie and Shelly had visited Messina Hof once before but never had the chance to take a tour. We decided to go early to Messina Hof to enjoy a tour before the evening’s festivities. Unfortunately it was a cold drizzly day so the tour was modified a little as we could not stand out in the vineyard and quickly walked from one building to the next. Skye was our tour guide and she still gave all the tour information while we stood in other areas. I can’t count how many Messina Hof tours I have taken but the tour guides are usually different and I learn something different every time. At the end of the tour Skye presented four wines for the group to taste ranging from dry to a Port style. 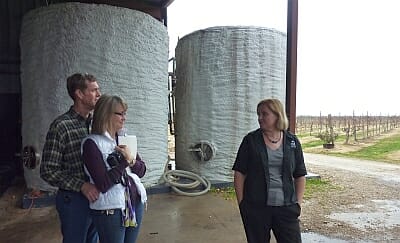 Shelly and Laurie enjoying the tour from Skye

We all then went to a nearby hotel to check in and get ready for the evening. Dinner reservations at Messina Hof’s Vintage House restaurant were at 8 pm. We were seated and it was a very nice three course meal served with a different wine for each course. The first course was a delicious butternut squash soup, followed by a cranberry salad, and then a choice of three entrees: quail, mahi mahi, or petit filet of beef. It was a wonderful meal to start the evening. 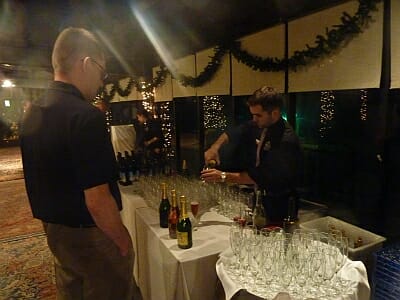 Next we headed upstairs where a wine bar was set up with at least ten wines from which to select. We each selected a wine and went to find a seat at a table. All the tables were decorated with either candles or a nice centerpiece. A DJ was present playing a nice variety of music ranging from country music to Glenn Miller to new line dances. 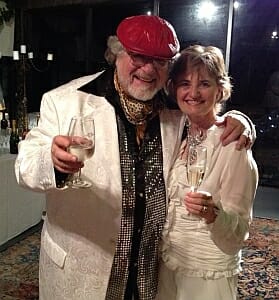 At the beginning of the dancing Paul and Merrill Bonarrigo arrived, walked around to each table, and greeted each person. A trivia game was played in the middle of the evening and a guessing of the number of M&M’s in a jar was done. 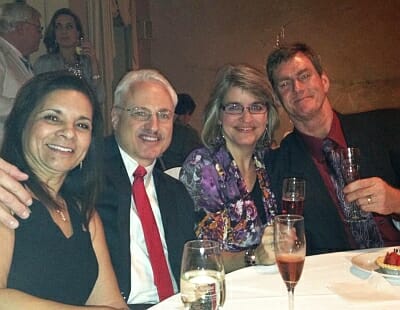 The countdown to midnight started and as the clock hit midnight, a new year had begun. More dancing was continued but then it was time to call it a night. Once again it had been another great event at Messina Hof.

Thanks to Paul and Merrill Bonarrigo for their photo.