After years of experimenting with different grape varieties and winemaking in Dallas County, the Dallas location of Inwood Estates Vineyards opened in 2006. In 2009 Inwood Estates in Florence opened and the Gatlins moved to the neighborhood where the winery is located.

During a recent stay at The Vineyard at Florence, I had the opportunity to talk with Dan Gatlin. 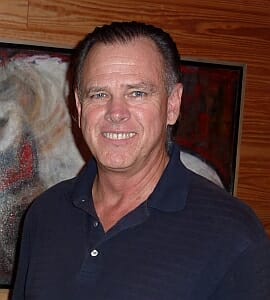 Dan Gatlin grew up in the retail beverage industry as his family was the owners and operators of the Hasty chain of wine, spirits, and convenience stores in Dallas, Texas. Gatlin built his wine skills as a professional wine buyer and eventually became vice-president of the company. When Hasty was sold, he turned his interest to vineyard research.

In 1981 Gatlin ordered every possible grape variety available from California to test plant the 22 all-vinifera varieties in Denton County, Texas, to determine what would grow best in Texas. This vineyard, one of only five or six in the state at that time, proved to be an invaluable source of information. At that time there were only a few growing and making wines like the Aulers of Fall Creek Vineyards, Bobby Cox, and the McPhersons (Dr. Clinton A. “Doc” McPherson and Kim McPherson).

Years of trial and error with extensive research of over 30 grape varieties over six vineyards determined that Texas wines were destined to be heavily influenced by the terroir which is the soil or land. Gatlin learned he had to deal with not only the temperatures of Texas but the soil and climate conditions. This made it much more difficult from year to year to produce great grape crops unlike California which is pretty much constant. Growing in California you can pretty much “mail it in” whereas Texas is one of the hardest places to grow grapes.

The extremely high amounts of minerality in Texas wine would define the wines as “Old World” style being similar to European products, especially Spanish, French, and Italian wines rather than United States west coast wines. The high-calcium soils in Texas yield earthier wines that develop their complexity over time and would not be known for fruit-bomb styles of the “New World” that typify California and Australia.

Since most American’s knowledge of wine is limited to what the California wine industry produces, American consumers expect all American wines to taste like California wine. When they do not, then there is confusion and a belief that the wines are not correct.

California winemakers have not had the need to learn the production techniques and procedures of high-quality, high-mineral wines which is needed in Texas. Few Texas winemakers are aware of how impacted their fruit is by their terroir since they have learned from California where minimal impact exists.

The Palomino grape was discovered during this time. It was once the most widely planted grape in Spain and primarily used for Sherry production. The production of the grape yielded less than one ton per acre though.

In 1997, Dan and Rose Mary Gatlin bought a large lot in Dallas where they remodeled the house for their residence and established a 245 vine urban vineyard in their backyard known as the Inwood Road Vineyard. Early wines produced from there were the Palomino-Chardonnay.

Most wineries age wine in barrels up to two years but Gatlin ages his wines three years hence the extra years before the 2003 wine was available. This extra aging time also adds an extra expense to the winery. The extra full-cellaring time allows the oak aging process to make the wine better but it is also the most expensive part of making great wines. Gatlin makes his wine in a French traditional style and ages his wines in French oak barrels. They use no filtration on their red wines and it is a very time-consuming process which is also very costly. Most other producers and consumers turn away from the “costly” part. These extra expenses to produce a better quality wine justify the price point of Inwood wines.

The 2005 “Cornelious” 100% Tempranillo which Inwood Estates is known for was the first vintage of the “Cornelious” produced. With the French influence, Inwood also produces its Magellan just like the Bordelais did before 1982. Their Tempranillo is more like Spain’s of 20 years ago. A 100% Chardonnay was first produced in 2010 from Dallas County grapes and released in 2011.

The weather differentials between vintages leave a signature on their wines that define the growing season. Gatlin’s wines improve greatly with bottle age and each of the wines is unique and hand-crafted.

There are two labels of Inwood Estates wines: Inwood Estates and Segundo. Segundo means “second” in Spanish and the wines are made from barrels or lots judged not good enough for the Inwood wine label. They are blended with other American wines to create a value wine.

What Else Besides Winemaking

Gatlin did not know what else he would be doing if he wasn’t making wine as he has been doing it for many years.

When asked which of his wines was his favorite, Gatlin said it was a difficult question as all the wines are like your kids. They’re all your favorites and they all have their own intricacies. If he was pressed to select one wine, it would be Veritas which he makes for Vineyard at Florence. 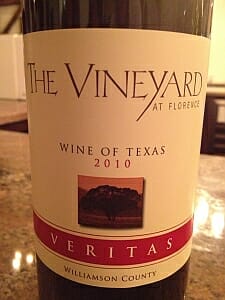 A typical day for Gatlin varies as it depends on the time of the year but regardless he is always busy. Besides winemaking he also has to deal with marketing, scheduling, and other items.

He now has associates helping with the winemaking so he doesn’t do things such as pump overs in the tanks as much as he used to, but his hand is still involved with every part of the winemaking.

Best and Hardest Things as a Winemaker

Gatlin is very proud that his wines are in almost 300 high-scale restaurants in Texas.

The hardest thing is people not realizing the effort which was put in to get to the point where he is now. He had many years with no income from the viticulture and winemaking research in order to find the best possible combination that works in Texas. One has to factor in the startup costs on top of everything else when pricing a bottle of wine. He said anybody can price a bottle of wine at $5 but it won’t be long until they declare bankruptcy.

Wine writers are also difficult because they concentrate on the wine now instead of appreciating what the wine can become if it is cellared. For example, “Cornelious” Reserve got some media discussion when it was released at almost $70 a bottle. The regular “Cornelious” has brilliant red-fruit strawberry-raspberry character with a medium tannin structure which contributes to its fruit forward enjoyment. The Reserve has dark, if not very dark overtones of the blackest cherries coupled with thickly layered tannins delivering a super-soft velvety finish. It contains a very complex tannin structure not typically associated with Tempranillo. Where one is bright, the other is dark. This warranted the higher cost of the Reserve but wine writers did not understand the differences.

Life Away from the Winery

Using Gatlin’s research at growing grapes he talked to Neal Newsom, grape grower in the High Plains of Texas, about having him grow Tempranillo. Newsom was hesitant at first but since Gatlin would help share the burden, Newsom planted a block of Tempranillo and it became a success. Gatlin believes Newsom Vineyards sea level of 3,700 feet in Plains, Texas provides the best Tempranillo grapes in the state.

The Tempranillo found a perfect home for the development of tannin and brix with the high mineral soils and cold desert nights. It is also adaptable to the hotter climates such as Texas making it grow perfectly in the High Plains.

Gatlin believes Neal Newsom from Newsom Vineyards and Kambrah Garland from The Vineyard at Florence are the best growers in the state.

Inwood Estates is opening a tasting room in Fredericksburg right across the street from 4.0 Cellars and should be open March 1st of this year. There is a current building which is being remodeled and renovated. Gatlin was first contacted by Nitzan Mendelbaum about helping him make his initial wines and on the back label was Inwood Estates. Soon however Mendelbaum Cellars will be making their own wine and the label will entirely be Mendelbaum Cellars.

As previously mentioned, Gatlin believes the best wine he has made is Veritas at The Vineyard at Florence, followed by the two upcoming wines: Tempranillo-Cabernet and Tempranillo.

After talking to Dan Gatlin, I was going to do a tasting of the estate wines at The Vineyard at Florence. He poured me a taste of the Tempranillo-Cabernet and Tempranillo in separate glasses and told me to take them next door so I could taste those two wines next to the Veritas. Never to turn down an offer, I gladly did exactly that. After tasting the three wines, I could truly understand why Gatlin thought they were his best three wines.

It had been a wonderful learning experience for me in both learning about Dan Gatlin and his wines, and I grew a greater respect for the man behind Inwood Estates Vineyards.