Yepez Vineyard is located in Baytown and is owned by David and Lena Yepez. Over 400 Blanc du Bois and Black Spanish vines were planted by friends and family on one acre of the 20 acre lot in 2005. The winery was opened January 2008 and today sits between two vineyards. 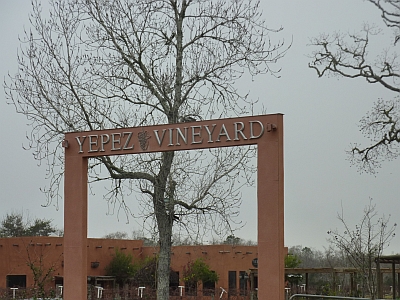 The last time we visited Yepez Vineyard, Lena Yepez helped us just like previously. David Yepez was busy out on a tractor in the vineyard which he manages.

The winery building itself is beautifully designed in a Southwestern motif. We learned that David and Lena used to love going to New Mexico, but realized with opening the winery they couldn’t go as much. Instead they brought New Mexico to the winery with the Adobe styling and decorations. 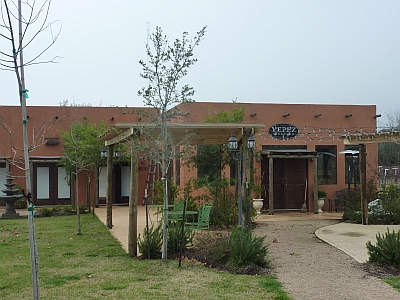 Tastings are done standing at the tasting bar. There is a tasting fee for three wines which are poured from the uncorked bottles. There are other options available if you would like to do a private tasting. After a tasting you may want to sit at one of the available tables to enjoy a glass of wine.

Three of their wines are named after the Yepez’s beautiful daughters who are often present in the winery: Chloe, Savannah, and Cora. Cora was born in 2010 and that inspired David and Lena to plant an olive grove near the vineyard. The olive grove became the first one planted in their area.

Yepez Vineyard uses 100% Texas grapes. They get their grapes from the High Plains and also Windy Winery’s vineyard. They use French oak barrels for their wines which need to be in a barrel. Yepez Vineyard produces 500 gallons of wine a year. Lena has to report the number to the TABC (Texas Alcoholic Beverage Commission) in gallons which is how she readily knew the amount of wine produced. 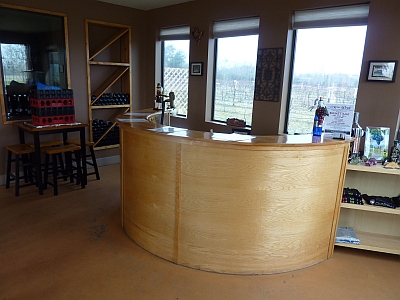 David and Lena’s mentor when starting the winery was James Frascone from Frascone Winery in Oak Island. Unfortunately he lost his whole winery during Hurricane Ike in 2008. He is not sure about rebuilding but Lena said they are encouraging him to rebuild. Besides having an additional winery nearby, the other advantage is a wine trail can be created.

Events are held at the winery such as weddings, live music on most Sundays, and grape stomps during the Fall. They can accommodate family and company picnics, private events, corporate meetings, weddings, anniversaries, and other special events. A covered pavilion is available for use in addition to a playground for children.

When you are near Baytown, stop by the Yepez Vineyard for a taste of 100% Texas wine.

We would like for you to come by the winery again. We have our grape stomp this Saturday oct 19.

Sounds like fun! Unfortunately we’re heading to the Hill Country this weekend.

I hope you all had a great visit to the hill country. We had wonderful weather and a great Fest. I wanted to thank you guys for promoting Texas Wineries. Your dedication to our wine industry is greatly appreciated.

Thanks David. It is truly a pleasure and appreciation by both consumers and producers is what keeps us going. Glad you had a great festival!

MENU
wpDiscuz
4
0
Would love your thoughts, please comment.x
()
x
| Reply
Send this to a friend