I have previously posted about the NICE Winery located in Houston and owned by Ryan Levy and Ian Eastveld. We enjoyed visiting the winery the first time so much that we joined their wine club. NICE Winery makes their Malbec in Mendoza, Argentina and has three vintages available: 2007, 2008, and 2009. The 2009 was their first Reserve wine and just won a silver medal in the 2013 Houston Livestock Show and Rodeo International Wine Competition.

We have done a couple vertical tastings before and were curious to see how a vertical of the NICE Winery Malbecs would be. If you do not know what a vertical is, different vintages of the same wine type from the same winery are tasted together. This can show differences between the various vintages. We bought the bottles of 2007, 2008, and 2009 and invited a small group of close friends to participate in the vertical tasting. 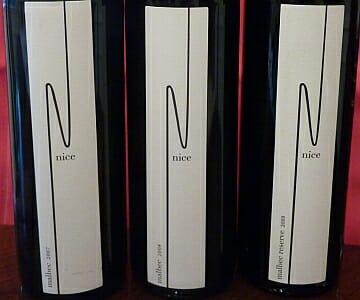 To make it interesting for everybody involved and since we really like the NICE winemakers, we invited Ryan and Ian too. They told us they had a previous commitment but they provided their vertical tasting notes for the three wines to help us. We decided tasting three wines would not take very long so we decided to enhance the evening with a blind tasting of other Malbecs. Since we had done a blind tasting of Texas Orange Muscats earlier in the year, we had a little experience and started deciding on the wines to blind taste.

The primary region in Argentina which makes Malbec is Mendoza in the north. Another region is Patagonia in the south. There were plenty of Mendoza Malbecs to choose from at the store but I decided on a popular brand which can be found most places: Alamos and their 2011 Malbec. I could only find one Patagonia Malbec which was the 2007 Del Fin Del Mundo Reserva Malbec.

I learned that Malbec originated in France and is now found primarily in the town of Cahors in South West France. I chose a 2010 Georges Vigouroux to represent the old world. Since I am a Texas wine lover, I had to include a Texas Malbec. When Gloria and I visited Perissos Vineyard and Winery, we got a bottle of their 2010 Malbec made from 75% estate Malbec and 25% estate Dolcetto. This wine is now sold out and we decided to share it with our close friends. 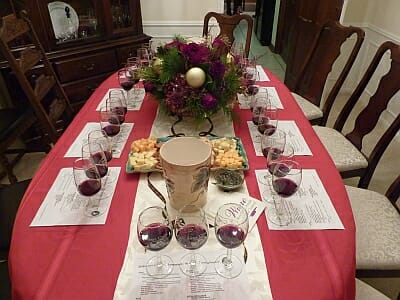 We invited eight of our close friends and prepared for the evening. During the day we learned that Ryan and Ian of NICE Winery had been able to rearrange their schedules and would be able to attend. Everyone arrived and we sat down to start our vertical tasting of the NICE Malbecs. It was suggested to provide beef during our Argentinian evening so we had brisket and chimichurri sauce for eating along with the usual cheese and crackers. 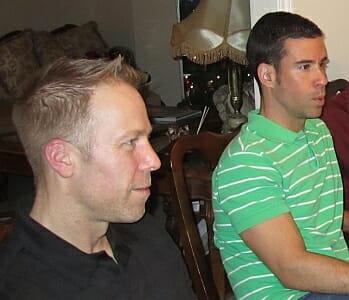 All was quiet while everybody tried the three years of Malbecs starting from oldest to newest. Discussion then started with people explaining which vintage they preferred and other comments on the three wines. Ryan and Ian provided answers to questions and also gave information on the different vintages. We all learned more about Malbec and how Ryan and Ian had made the wines in Argentina. 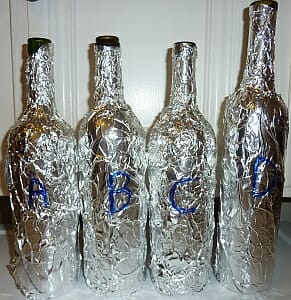 It was now time for the blind tasting and everybody was handed a tasting sheet for writing tasting notes and their rating of the wine. It was revealed there would be four Malbecs from different regions around the world and part of the tasting notes should be to include a guess as to where the particular Malbec was from. We have taken a couple blind tasting classes at NICE Winery, so it was going to be interesting to see Ryan and Ian in action doing a blind tasting of wines. They are both Certified Sommeliers and during the blind tasting, they were very quick in writing down their tasting notes.

After all four wines had been tasted, we went around the table and people gave their tasting notes, guessed where the wine was from, and then gave their rating for each wine. When we were done revealing the wines, the overall and almost unanimous choice was the 2011 Alamos Malbec from Mendoza. This was a little surprising since this is a very common brand and the cheapest in price of all four wines. 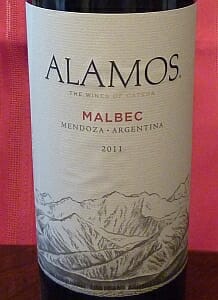 The group had tasted seven Malbecs so we knew it was time for a change and brought out the NICE Winery 2010 Demi-Sec Sparkling Wine made from Muscat of Alexandria grapes again in Argentina. It was a refreshing change from the Malbecs.

The end of the evening was drawing near and we finished it with a White Port and Tawny Port along with cheesecake, cookies, and pastries which the various guests had brought. It was the perfect ending to a very entertaining and excellent evening.