Texas Hills Vineyard is located in Johnson City and is owned by Gary and Kathy Gilstrap along with their son Dale Rassett. Dale manages the vineyard, Gary is the winemaker, and Kathy manages the tasting room.

Texas Hills Vineyard planted their vineyard in 1995 and the winery opened in 1999. We have been to the winery more than a few times and as you arrive at the winery, the large vineyard is located along the driveway. Grapes grown at Texas Hills Vineyard include Pinot Grigio, Sangiovese, Orange Muscat, Cabernet Sauvignon, Chardonnay, Merlot, and Syrah. Wines produced from the estate grapes include a Chardonnay done in a European style, Rosato di Sangiovese, Volare which is a sweet red wine, and a port from the Cabernet Sauvignon. Texas Hills Vineyard holds the distinction of being the first producer of Pinot Grigio in Texas. 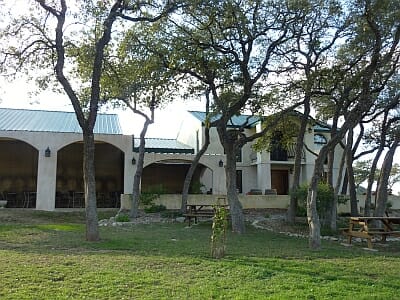 They grow 40% of the grapes they use in their wines which are of an Italian influence and the rest are from elsewhere in Texas so the wines are made with 100% Texas grapes. Other grapes used come from three other vineyards in Texas: Newsom Vineyards, Reddy Vineyards, and the Drew Tallent Vineyards.

Tastings are done while standing at the semi-circle tasting bar. There is a tasting fee for five wines and the tastings are poured using a measured pourer. After a tasting, you can enjoy a glass of wine on a nice patio overlooking the vineyard. 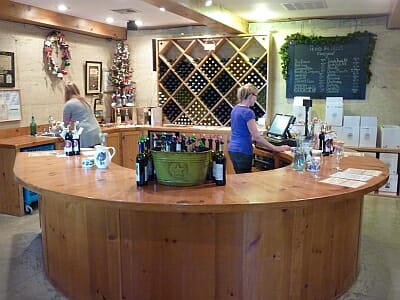 There is a nice gift shop with shirts and wine accessories. Texas Hills Vineyard has a wine club called the Circolo Wine Club, Circle of Friends. During the Fall they offer a grape stomp and other events are held throughout the year.

One time we arrived to do a tasting and briefly met Kathy Gilstrap. During our tasting, we asked about a tour. They checked with Gary Gilstrap who happened to be upstairs, and he came down to give us what turned out to be a very interesting tour.

Gary prefers to use non-traditional methods to make his wine. He said, “If there’s a better way, I’m going to use it. What we don’t use is barrels. What we do is use micro-oxygenation.”

In oak barrel aging, the natural properties of the wood allows for oxygen to enter the barrel over a prolonged period to aid in the softening of tannins in the wine. Micro-oxygenation mimics the barrel aging process within a shorter period of time and enables more control over the process. It also eliminates the need to store barrels and the cost involved with replacing the barrels.

Behind every tank in the Texas Hills Vineyard production facility is a box which infuses oxygen into the tank and wine. Oak chips are used in the tanks to get the oak flavor in the wine. The end result of this aging process is the wines taste like they have been in a barrel for two to three years.

There is a special racking tank and three times a year they rack the wine out of the tanks and into the racking tank. All the tanks are tied together with lines controlled by a central station with thermostats to control the valves and temperature during fermentation and everything is computer-controlled. 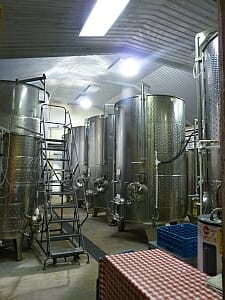 After making the wine, it of course has to be bottled. To do the bottling, Texas Hills Vineyard owns a mobile bottling line which travels to about 20 Texas and Oklahoma wineries to help the wineries do their bottling. When using the mobile bottling line, they filter down the wine first, the bottle can be rinsed if desired, nitrogen fills the bottle followed by the wine, and then corks or screw caps are used to seal the bottle. Texas Hills Vineyard uses both corks and screw caps for their wine bottles.

It is commonly understood that oxygen in a wine bottle is not good. Gary explained that a manual bottling process usually leaves about .35 microliters of oxygen in the bottle, but by using their bottling line only .03 microliters is left. The bottling line has the ability to bottle 200 cases an hour which keeps five people busy manning the machine.

The winery produces 16,000 cases of wine a year. Before the tour was over, we saw the lab where Gary enjoys being and he explained he was previously a pharmacist. Overall, Gary had given us a very informative tour of the winery and production facility. 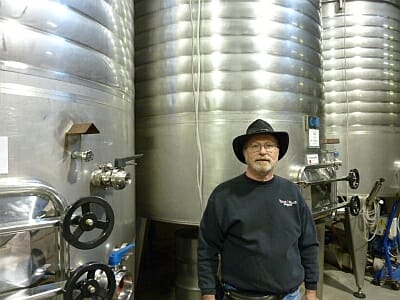