When we stayed at Neal and Janice Newsom’s Bed & Breakfast in the High Plains, their son Nolan said I really needed to go to Grape Camp. Who am I to disagree? I joined TWGGA (Texas Wine & Grape Growers Association) and registered for Grape Camp which occurred November 4-5 in Fredericksburg.

Registration started at 7:15am on Sunday which was going to be kind of tough for me since I had tickets to a concert the night before in Houston. I made reservations at a hotel about halfway between Houston and Fredericksburg (thank you for the clock change to give me an extra hour) and found the pavilion just after 7:15. TWGGA’s Executive Director Debbie Reynolds was present registering people as they arrived. 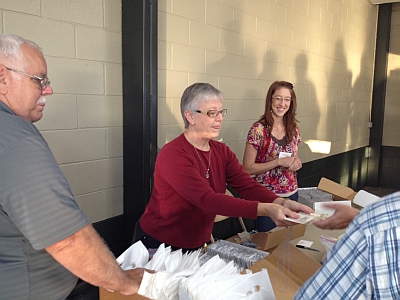 Day one was for new growers and I waited for the session to start at 8:00am. I was a little surprised to see Neal and Janice Newsom arrive and said hello to them. Later Nolan Newsom would arrive too. Since the second day was for advanced growers, I just assumed at least the really advanced grape growers would only show up for the second day. But as I learned after Cliff, Betty, Clint, and Alexis Bingham from Bingham Family Vineyards arrived too, all said they always learn something new. 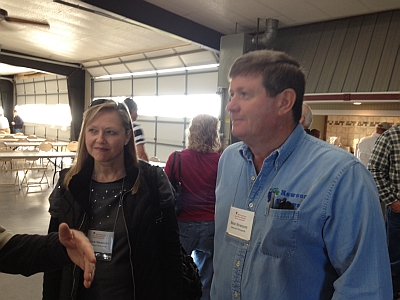 The session started with President Bobby Cox welcoming everybody to Grape Camp. The day’s sessions were geared to new grape growers with topics such as “Overall Planning for Developing a New Vineyard,” “Overview of Major Grape Diseases and Management Strategies,” and “Creating a Spray Program.” One comment which remained in my mind was as a vineyard owner, you will now become a meteorologist to watch the weather as it can vastly affect the vineyard. 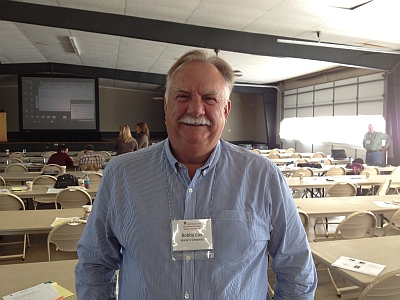 As the day’s sessions continued, I looked around to see who I had previously met. We were fortunate to visit a lot of the vineyards and grape growers in the High Plains so I knew those people we had met. In fact, Jet Wilmeth from Diamonte Doble Vineyard and Texas Custom Wine Works who we met when visiting Lubbock sat next to me. I asked him how the progress of Texas Custom Wine Works was coming along and he said they hoped to be up and running by next spring.

It was a decent sized crowd for the first day and I met some new grape growers who had either just started their vineyard or was planning on starting their vineyard. It was interesting seeing some of the new wineries who were present indicating they were really trying to learn more about their business.

During breaks, people could visit the ten exhibitors who were present. I recognized one person at a business, however, I knew him from being a winemaker. That was Tim Drake from Flat Creek Estate. I learned he also has a business called Texas Wine Lab who provides enological testing and winemaking consulting for Texas winemakers. Also present signing his great book about the Texas wine history entitled The Wineslinger Chronicles was Russell Kane.

As the end of the day’s session was nearing completion, more people showed up including advanced growers. After the day’s session was complete there was going to be a wine and cheese reception followed by dinner and nobody wanted to miss that. I also met Mike Batek and Jeff Ivy of Hye Meadow Winery which is planning on opening next spring. From the sounds of the wine they will be introducing and photos of the wine labels, I can’t wait to visit! 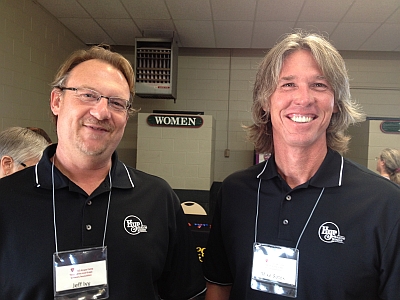 There was a break between the end of the sessions and the start of the wine and cheese reception. Since I didn’t have a nearby hotel, I headed to where the reception was going to be held. It seemed others had the same thought and we all met at the Inn on Baron’s Creek to determine exactly where the reception would be. I was running around the two buildings with the Binghams, Larry Epp, and others to find the reception room. We eventually found Debbie Reynolds and followed her to the room.

Soon many Texas wine bottles emerged as some were initially present and people were bringing their own bottle(s) of wine. It was a great tasting selection prior to dinner. I met other winery owners who I had previously met and for the first time met people like Les Constable from Brushy Creek Vineyards and Jorge Jaber from Jaber Estate Winery. It was a pleasure talking to everybody and trying any new wines which were brought. 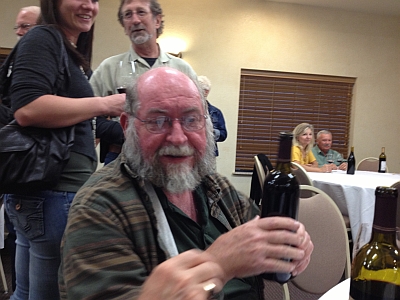 The barbecue dinner was excellent and I sat at a table with others including John Rivenburgh and Jennifer Beckmann from Bending Branch Winery who were a lot of fun. The day was over and it was time to get ready for the second day.

As the second day arrived, more people were present and I recognized more familiar faces. I also met other High Plains vineyard owners for the first time such as Joe Riddle from Uva Morado Vineyards, Bill Day from Buena Suerte Vineyards, and Alan and Matt Bayer from Bayer Family Vineyards. It was a pleasure to finally talk to Penny Adams, former viticulture advisor for the Texas Hill Country vineyards and now winemaker for Wedding Oak Winery.

The second day session was a larger group of people than the first day. As was true from the first day, Fritz Westover from the Texas A&M AgriLife Extension Service presented different sessions. Some second day sessions were “Pierce’s Disease Tolerant Varieties,” “Addressing Seasonal Nutritional Needs in the Vineyard,” and talks about different diseases which are encountered in the vineyard. 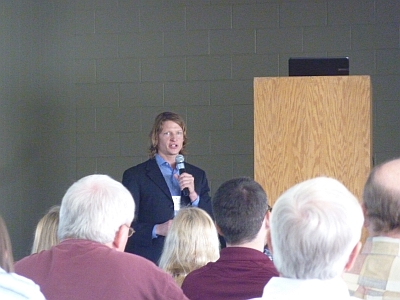 I have to admit since I am not a grape owner that a lot of the discussions were unfamiliar to me. However I grew a greater appreciation for the grape growers in Texas who are trying to provide quality Texas grapes for the Texas wineries. I cannot begin to list all the names of the people from wineries and vineyards who I met, but I know I can’t wait to see them again.

It has been a wonderful thing to learn that the vast majority of people who we have met in the Texas wine industry are just plain friendly folks. Maybe it’s the common bond of wine which brings out the friendliness in people but I am grateful I can be a very tiny part of it.

If you are not a grape grower or winery owner but would like to join TWGGA, you can sign up with a Friend membership on their website: http://www.txwines.org As I have learned in this short time, you will not regret it. See you at the next event!