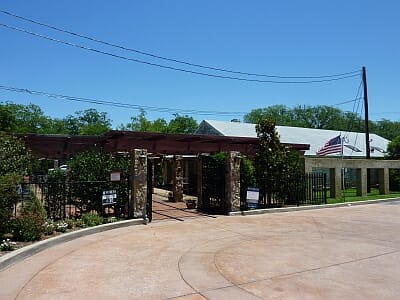 When I arrived at La Buena Vida Vineyards, I discovered it was one of the nicest looking wineries in Grapevine too. There is a large parking lot available which is unusual for most of the Grapevine wineries. The surrounding grounds are decorated in a Mediterranean theme with gardens, fountains, and Spanish tiles. 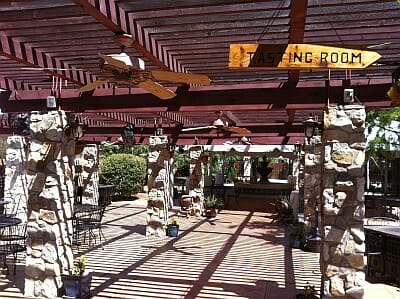 Upon entering the winery you will learn it is also decorated in the same theme and has a large tasting bar. The tasting bar is where you stand to do your tastings.

There are two tasting flights which you can choose from, the Good Life flight and the Take Flight with Texas flight. There is a tasting fee for only three wines but the wines are served with 2 ounces instead of the more commonly used 1 or 1 1/2 ounce pours so you do get a generous amount. However since there is a nice selection of wines available, it would have been nice to be able to taste six wines with a smaller pour. La Buena Vida Vineyards use both corks and screw caps and the tastings are poured from the bottle.

La Buena Vida Vineyards hosts everything from weddings and corporate events to banquets and private wine tastings. Live music is featured at the winery on Thursdays and Saturdays. When I was there the first time, a musician was playing on the shaded patio.

There is a small gift shop located at the winery. Food is available to buy while enjoying the Texas wine like meat and cheese trays, just cheese, and paninis, Wine cocktails like a Mimosa and Sauvignon Blanc Jello shots can be purchased. 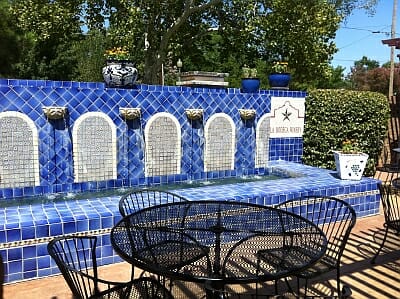 As mentioned previously, there is a sister winery called La Bodega Winery with two locations in the Dallas-Fort Worth (DFW) International Airport. Unfortunately the only way to get to the winery locations is to have an airline ticket. La Bodega Winery was the world’s first winery in an airport bonded to produce wine on site. We never happen to fly through DFW International Airport, so we never got a chance to visit. Since La Bodega Winery is a sister winery, some of their wines though can be tasted at La Buena Vida Vineyards.

The problem of visiting La Bodega Winery will soon be a problem in the past though. Friend and blogger Dave Potter from The Grapes Around Texas visited La Buena Vida Vineyards recently and learned the winery will soon be renovating into a new concept and will be called Sky Canyon Wine Bar with chef Stephan Pyles and feature wines which will not be uniquely Texas. It will be more of a restaurant and the Texas wine label will be going away. In fact La Bodega Winery stopped production of their wines in early 2012. The renovated wine bar will still be owned by Gina Puente.

Thanks to Dave Potter for providing information and photos to supplement my previous content.