We then saw other wine friends and bloggers from around the state including Frisco, Grapevine, Tyler, and Cleburne were discussing going to a wine festival too. Unfortunately there were at least three wine festivals being held the same weekend. After learning about the possibility to go to Fredericksburg, everybody was then talking about attending. I was part of a group of eight who had met in August at CrossRoads Winery and had a great time. So it was quickly decided we needed to get back together along with other wine friends who some had not yet met. A list was started and before the weekend it had grown to 20 Texas wine lovers including at least 6 wine bloggers. It was sure to be a great weekend!

Plans were made to meet at the festival and of course we wanted to still hang out somewhere after the festival too. We checked wineries, wine bars, and restaurants to decide where to go after the festival and the first desire was to go to a winery. Most wineries in Fredericksburg close at 6pm on a Saturday. This didn’t help since the festival ran from noon until 7pm. We were surprised with the festival being held that a nearby winery was not staying open later to draw the people who attended the festival. I then received an invitation from Pedernales Cellars for our group where we could relax on their deck after their normal closing time of 6pm for an hour or two. This would work out great and we could grab dinner somewhere after. We of course accepted the generous offer from Pedernales Cellars.

We then had to find a place to stay for the weekend and a lot of places were already booked because of the wine festival being held. We eventually were able to find a two bedroom bed and breakfast house to share with Rick and Jill.

Gloria and I headed to Fredericksburg Friday afternoon and near the end of the long drive, we decided we needed some Texas wine. We stopped at one of the first wineries and one of our favorites, William-Chris Vineyards. Upon getting out of the car we noticed another couple had just arrived: Kim and Sylvia McPherson. As you may know Kim McPherson is the owner of McPherson Cellars and his wife Sylvia is the owner of La Diosa Cellars. We had met Kim once but had not had the pleasure of meeting Sylvia as they had been out of town when we visited the Lubbock wineries. Soon Chris Brundrett, co-owner of William-Chris, arrived and welcomed us back. We decided to do a tasting of what was new while they went off to the winery. We met up later and in the meantime John Rivenburgh from Bending Branch Winery had arrived. They had been having a great time all day with other winemakers and grape growers touring the Hill Country. We had to pick up our bed and breakfast house key so we said our goodbyes to the fun group. 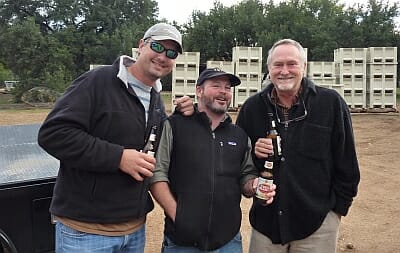 Saturday came and since Rick and Jill had wanted to visit wineries, we headed out early to visit 4.0 Cellars which was a winery they had not been to yet. Upon arriving at the winery we were met by another couple from our group for the day, Laurie and Shelly. We entered the winery and were greeted by Gene and Judy Estes, owners from Lost Oak Winery. Behind the tasting bar were Pat and Trellise Brennan, owners of Brennan Vineyards. Since we had met the McPhersons the night before, we had then seen all three primary owners of 4.0 Cellars. They said that all three winery owners would be participating at the festival doing different shifts. Everyone in our little group, soon to be a big group, enjoyed the tastings and wine from 4.0 Cellars. It was then time to head into Fredericksburg for the Wine and Food Fest. 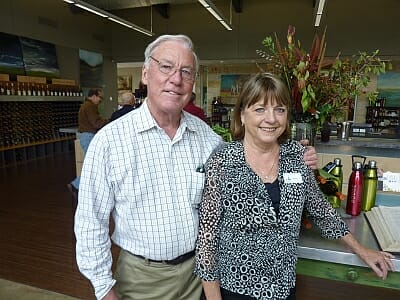 The plan for the entire group was to meet at the festival entrance but once we got there, some were so excited they had already started touring the winery booths. The wineries were underneath a large pavilion almost enclosing the entire four sides of the pavilion making a nice way to walk around the booths. It was impossible to keep the entire group together but we would always run into others from time to time. The crowd was low at the beginning of the festival making it easy to go from booth to booth but eventually it had picked up and everyone was having a great time. 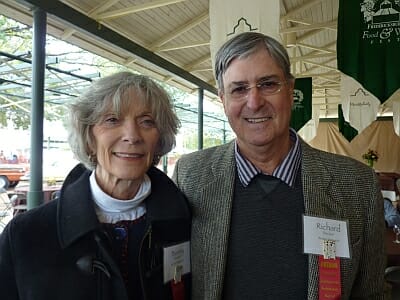 Some of us had purchased the extra Vintner’s Experience for $15 each which was supposed to be the winemakers from Grape Creek Vineyards, Becker Vineyards, and Fredericksburg Winery providing a tasting of a white, blush, and red wine which you could not get to taste in the normal winery booths. It turned out the winemakers were not present. The one nice thing was Dr. Richard Becker and Bunny Becker, owners of Becker Vineyards, presented one of their wines. It was fun listening to all the speakers but the opinions of our group who attended the seminar decided it was not worth attending again.

We rejoined the rest of our group and after some food was bought, we started touring the rest of the festival. Everyone was then to meet at Pedernales Cellars at 5:30pm. Unfortunately two friends had to get back to Austin before dark so even though they wanted to go to Pedernales, they would be unable to attend. Everyone else in the group eventually would make it to Pedernales.

Some of the Texas wine lovers from around the state

When we arrived at Pedernales Cellars a lot of the group had already arrived and were doing tastings to decide what they wanted to drink for the evening. Cathy Locke from Cathy’s Sweets was at a table in the tasting room and we had to say hello and buy some chocolate truffles. Julie Kuhlken, one of the owners of Pedernales Cellars, soon came in to say hello and welcome us. We were going to sit on the deck but since the cool temperatures had already started dropping, she was nice to get us set up in a private conference room. Everybody had their favorite wine bottles and with some snacks bought at the winery, all enjoyed sitting around the table socializing.

Julie Kuhlken came in again later to make sure everything was going well and we all thanked her for letting us stay there. It was time to decide what we wanted to do next. Some people decided to go back to their lodging for the evening and the rest wanted to find a restaurant to eat. Whitney Clement from Pedernales Cellars, who had been helping us during the evening, recommended the Buffalo Nickel and was even so kind to call them and make a reservation for the group going to eat. Graciousness really runs strong at Pedernales Cellars. We all helped clean up the conference room and Gloria and I decided to join the group going to eat.

There were eight people at dinner enjoying the Buffalo Nickel’s country cuisine. Most people at the end of dinner had decided to call it a night and we all said our goodbyes until the next time we all meet. Overall the day and road trip to Fredericksburg had been a great success.

You can see more photos from the festival on our Facebook page.

Thanks to Denise Clarke for the group photo