Clear Creek Vineyard is located in Kemah and is owned by David Skinner. Dee Pedraza is the general manager. Bob Besgrove and Samantha Choate share the winemaking duties with David Skinner. 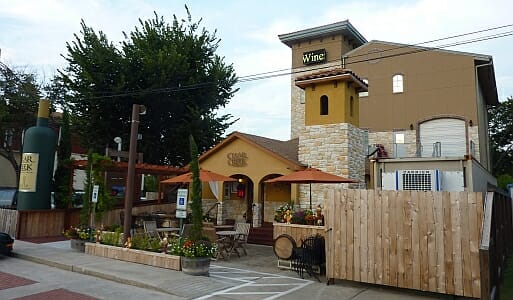 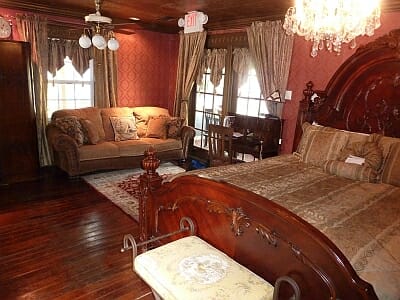 There was a D’Vine Wine in Kemah which we had previously visited. David Skinner bought the D’Vine Wine location in 2007, renovated it into Clear Creek Vineyard and opened July 8, 2011. Reading articles about the new winery made the winery sound impressive which meant we had to return to Kemah to visit. I saw a contest advertised on Facebook for a free night at the Clipper House Inn & Vineyard given by the Bay Area Convention & Visitors Bureau. I entered and was surprised when I was notified I had won. Now was the perfect opportunity to visit the new winery and have a nice stay after visiting the winery.

We arrived at the Clipper House Inn and after checking into our cottage, we met Barbara and Jerry Hopper who showed us around the Inn and then brought us to the winery. The winery is a beautiful three-story Tuscan-inspired building and a party was taking place on the ground floor. We entered the elevator and went to the second floor. The second floor is the production area and the third floor is where the tasting room is. Barbara was originally going to give us a tour of the winery but she said her son-in-law was going to give us a tour instead. When we reached the second floor, we were introduced to David Skinner, her son-in-law, and then I was able to put two and two together. 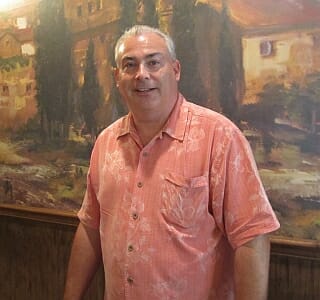 David of course had a wealth of information about the winery. We told him we had been there previously when it was just D’Vine Wine and he said that building is now their restaurant Tabella. The winery is located behind the restaurant.

One of the first questions I had to ask is what I had read when the winery was first opened. The comment I read said they were planning on being the biggest producing Texas winery and they were going to use only California fruit. David said right now they are producing 30,000 cases of wine a year and eventually they will be able to do 100,000 cases which will put them in the top 10 of Texas wineries. Regarding the California fruit, there was no denying that and the fruit comes from California as grapes, must, or juice by using custom crush facilities in California. Clear Creek Vineyard does have a small vineyard at the winery and they have looked at the High Plains for Texas grapes. However, David said the price for Texas grapes are about the same or more expensive than California grapes. 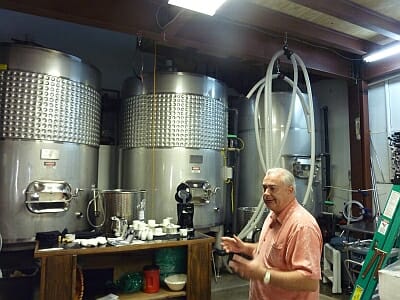 David showed us the production room where stainless steel tanks are the first thing visible in the room. When the winery first opened, the room did not have a ceiling which meant you could view the production room from the third-floor tasting room windows. However, they needed to expand with more production space so they had to add a floor and put more tanks on the third floor above. They are already looking to expand again as they need a new production floor and more storage space. In the production room stands what looks like a huge half barrel but actually is an oak fermenter which they use to ferment their Chardonnays.

Clear Creek Vineyard uses a sophisticated bottling machine from Italy which can do both Stelvin screw caps and corks, and can fill 2000 bottles of wine an hour. All it takes is a little adjustment and they can switch the bottling from one closure to another. The fruit wines and lower-priced varietals made at Clear Creek Vineyard uses screw caps whereas natural corks are used for the other wines. There is about a two to one screw cap vs. cork ratio of closures used. 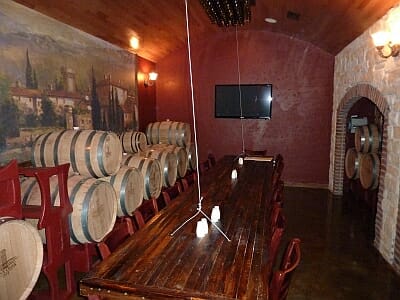 Since the winery recently opened, their first barrel-aged wines will be coming out later this year. Speaking of barrels, next to the production room on the second floor is a nice barrel room with a long table in the middle of the room. They use a blend of American and French barrels with the French barrels holding their Chardonnay and Cabernet Sauvignon. The barrels are used twice and most of the barrels are medium toasted however some are heavy toast. The heavy toasted barrels are used for the Cabernet Sauvignon.

Wine dinners and special events are held in the barrel room. Other events held at the winery include Ladies Night on Thursdays, Happy Hour on Fridays, and Wine-A-Rita specials on Sunday.

I had read David Skinner was a professor at Rice University but thought that was pre-Clear Creek Vineyard days, but we learned he still teaches at Rice University. He told us a student once did a case study on how to make money in the wine industry and came up with the answer that money was in wineries and not vineyards. Hence that is where David is concentrating his resources. 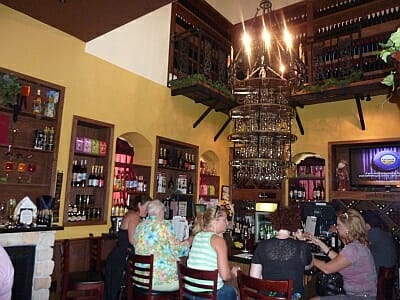 After our great tour with David Skinner, we were left in the tasting room so we could do a tasting of wines. There are actually four tasting areas with one main tasting room and the others are used if needed. In the main tasting room, you can sit at the tasting bar or sit at a table. There are different tasting fees depending on the types of wines you want to taste: Special Reserve/Ports, Classic Reds & Whites, or Fruit wines. Tastings are poured from the bottle and crackers are provided for cleansing your palate. You can buy food from the restaurant Tabella in the front of the winery which offers appetizers, flatbreads, and small plates.

Clear Creek Vineyard has already won awards for its Riesling, Merlot, and other wines at different wine competitions like the Finger Lakes International Wine Competition in New York. There is a nice gift shop with wine accessories, clothing, jellies, and spreads. Private tours and tastings are available.