This weekend there were at least five wine festivals taking place in the state of Texas. Like last year we volunteered to help pour for a winery at the Old Town Spring Autumn Art & Texas Wine Festival. When we arrived at the festival, we discovered we were both pouring for Messina Hof. Coincidentally or maybe not, we also poured for them last year at the same festival. 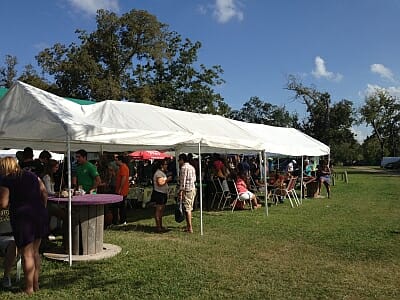 Fortunately most of the table had been set up for us by the volunteer coordinator since the table was going to be manned only by volunteers. We noticed some things missing and found some of them nearby. The only things we could not find were some kind of tub for the table to put bottles in ice from which to pour and a pitcher for water to rinse glasses. A decorative basket was provided by the festival to display the different wines available for tasting and we saw other wineries had provided a display of sorts for the same purpose.

Since we worked the first shift on Saturday the crowd was a little thin to begin with but quickly picked up. The festival organizer said before the festival that the ticket sales were double last year’s festival which was the first year, and the crowd soon showed that as it picked up very nicely. By the time our shift was over, there were lines at all the winery tables and everybody looked to be enjoying themselves. 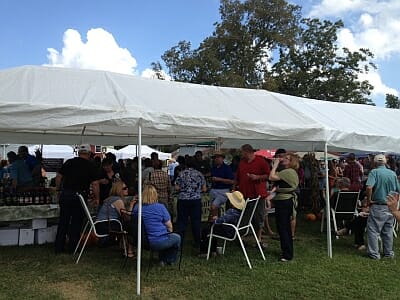 I learned they will be organizing another wine festival in Old Town Spring for next April. We have it marked on the calendar and will look forward to volunteering again.

Now that we did some work, it was time to check out another semi-nearby festival in Bryan called the Texas Reds Steak & Grape Festival. The festival promised over 20 Texas wineries and one of the wineries in Old Town Spring said they heard from their counterpart in Bryan that the festival was already crowded.

We arrived at the festival, found the Will Call booth, and entered with our ten tasting tickets and a steak ticket. That was one thing which was different and something we didn’t care for. We were only interested in visiting the wineries but we had to buy a Wine Lover’s package which included one steak dinner, of course for more money. We noticed at the ticket booth that the steak dinner could have been purchased separately but there was not a way to get just the wine.

We headed directly to the wine tents, picked up our wine glasses, and then went to see the wineries which were there and to meet some winery owners and winemakers we knew. It didn’t take long as most winery booths had their owners or winemakers present. We arrived at the Messina Hof booth and noticed they were serving the same wines we had poured in Old Town Spring. I suddenly heard someone talking and it was Paul V. Bonarrigo who wanted to give me a bag filled with Messina Hof brochures. He was obviously kidding and we told him that we were just giving those bags out in Old Town Spring. Merrill Bonarrigo was also there and we had a nice conversation with them. It really is nice being a VIP member and feeling part of the family. 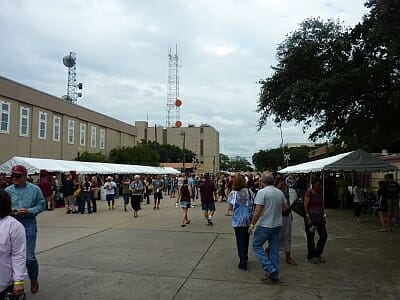 We took photos of many other owners and winemakers and those photos are on our Facebook page. There were actually 26 Texas wineries present at the festival.

One thing which was kind of strange which I didn’t understand from the website, and honestly some of the wineries didn’t quite understand either is the standard and premium wines which were offered at the festival. The wine tents were divided up on opposite sides of an intersecting street and one side had the large tent with the premium wines. Each winery had a premium wine which was offered only at the large tent for two tickets instead of the normal one ticket. The wineries we talked to about this were kind of confused how they were able to determine a premium wine vs. a regular wine. The only wine we noticed which obviously would be considered a premium wine is a Haak Winery Madeira Blanc du Bois which was selling for $40 at the festival. Most other premium wines being sold at the festival (which meant a markup from normal prices) were less than $20 and a lot around the $15 price. One winery said it was too bad they had to do the premium wines because nobody at the premium wine tent knew anything about the wines since they were volunteers, and you would think those are the wines which the pourers should really be knowledgeable about. If the festival really wanted to charge two tickets for a wine instead of one, they could have had those wines at each winery booth and have faith that the wineries would be able to understand to take one or two tickets depending on the wine being tasted. 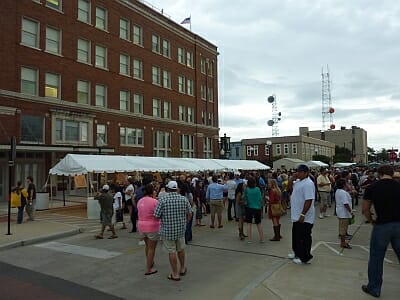 After taking our first trip around the wine tents we decided to find the steak we had purchased as part of the Wine Lovers package. We found the tent and it was actually a nice dinner with steak, two sides, bread, drink, and dessert. It just would have been nice to be able to have that as an option instead of being forced upon the wine drinkers.

We took another trip around the wine tents and met other winery owners who had not been present the first time. It really is nice when you can meet the owners and winemakers in addition to of course tasting some new wines which you have not tried before.

It was starting to get dark and after touring some of the vendor tents, it was time to make the drive home. The day had been long, but going from a small wine festival to a larger wine festival and enjoying both equally made it a very enjoyable day.

Thanks to Carol Barry for some of the photos.