Maydelle Country Wines is located in Rusk near the railroad tracks of the Rusk railroad. The winery is owned by Steve Harper and Cheryl Ivie-Harper and was opened in 2004.

The Texas State Railroad in Rusk has railroad tracks located right next to the winery and you have to cross them to get to the winery. The first time we visited the winery it was unfortunately closed because of an unplanned appointment according to the sign at the door, so we made a point the next time we were in the area to visit again. 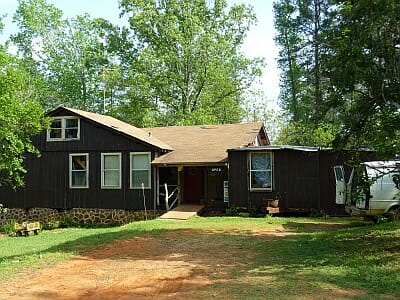 The next time we visited, the winery was open and Cheryl Ivie-Harper greeted us when we walked into the winery. We commented on the railroad tracks and Cheryl said when the train goes by the windows in the winery shake.

Cheryl then led us through a tasting of their wines. The tastings were complimentary for whatever wines they had available. You stand at the tasting bar to do your tasting and the tastings are poured from the uncorked bottles. Crackers are available during the tasting. 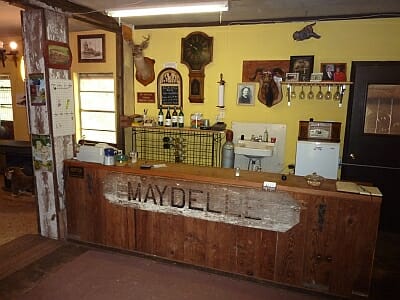 Maydelle Country Wines is noted for their fruit wines like Blackberry, Lime, Lemon, Peach, Pear, and even Elderberry. At the time we tried an experimental Grapefruit wine which was done with filtered water. Usually, they don’t use the water at the winery location to make their wine but bring 100 gallons of local city water in at a time. The Grapefruit wine must have passed the experiment as it is now offered.

Cheryl gave us a tour of the winery after the tasting. We walked by Steve Harper who was busy in another room with winemaking but he did say hello.

Maydelle Country Wines may be a small winery but they are big in their distribution of their wines. I give them major credit for getting their wines into distribution stores like Brookshire Brothers supermarkets and Spec’s liquor stores.

Cheryl mentioned they were hoping to open a new tasting room in Rusk with their wines but also wines from other local wineries. They had hoped to feature wines with unusual labels. In June 2012, Vino Incognita opened in Rusk and this is the start of what Cheryl and Steve had envisioned. 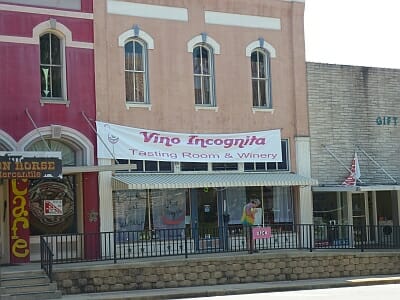 Vino Incognita is located right in the downtown heart of Rusk next to the courthouse. Steve Harper was very visible outside the winery in his traditional tie-dyed shirt but was busy on the phone.

I entered the winery which has a large tasting room with many tables and in the back is a small tasting bar. I was asked if I would like to do a tasting but since I have tried most of the wines they feature from various wineries I declined. Vino Incognita offers wines from various wineries in the area such as Los Pinos Ranch Vineyards, Tara Winery, Fairhaven Winery, Sweet Dreams Winery, Dixie Wine Company, and of course Maydelle Country Wines.

Tastings are served at the tasting bar and there is a tasting fee for five wines. Pretzels are available to cleanse your palate. 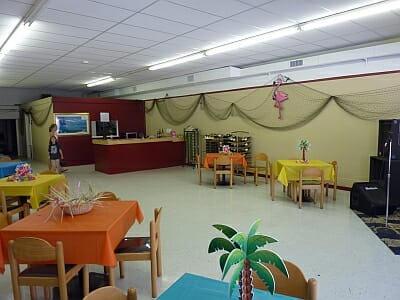 One of the people helping me was the chef who will be overseeing the operations at the winery. Since my visit, Vino Incognita now has opened the restaurant which serves lunch during the week and dinner Friday and Saturday nights.

The gift shop at Vino Incognita sells goat’s milk soap and candles in addition to a selection of teas. Live music had just started being held at the winery too.

The concept looks like a great idea as you can stop in to enjoy a good meal in addition to picking up your favorite wines including those from Maydelle Country Wines and other local wineries.