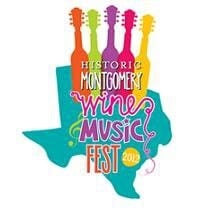 The Montgomery Wine & Music Fest was held on Saturday, September 15. A few days before, the weather forecast did not look good predicting 30% chance of rain but fortunately no rain was seen, at least during the early hours when we were there.

We volunteered to help a winery pour and were afraid we might get rained out or the crowd would be less because of the weather. We arrived at the festival in plenty of time for the first shift of the day. Upon checking in at the wine tent which has been moved three consecutive years now, we found out which wineries we were helping. Gloria was going to be pouring for Sweet Dreams Winery and I was going to be helping Saddlehorn Winery. 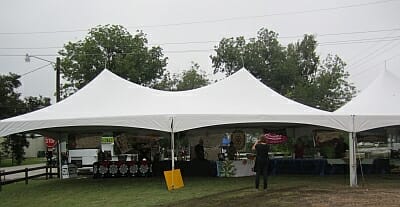 As I said, this was at least the third consecutive year the wine tents have been moved. The first year we attended the festival as patrons there were two tents which were widely separated, so much so that we did not realize there was another tent at first. Last year when we first volunteered, the tents were all against the Community Center building where the cooking demonstrations are held. This was better but the tents were crowded with people due to the smaller location and it seemed to me at least the tent width was not as big meaning people standing in front of the winery tables did not have as much room to stand. This year the tents were set up in an L-shape near the southern end of the festival area. They seemed to be bigger tents as people had a lot of room under the tents to stand and they could go right down the line from winery to winery. I heard more than a few compliments that it was a better setup. 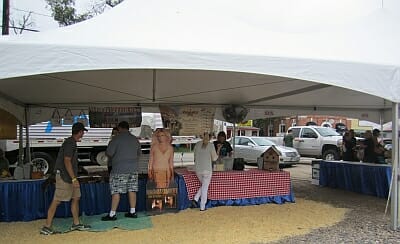 That was the good part. A couple problems occurred which were really confusing for the wineries and volunteers and one was how to pour the wine. Everyone was told beforehand and there was even a paper on every winery’s table that the maximum pours which could be done was two which also meant two tickets. Measured pourers were provided but the wine glasses which consumers were provided with their $25 wine package along with five wine tickets had two lines on the glass. A one ticket pour from the measured pourer was enough to fill to the first line. This made it unnecessary to use the measured pourers. But the confusion started when it was assumed that two pours were for the second line. I was next to the Cork This! booth with owner Karla Nash and to solve the confusion we did an experiment to see what two pours from a measured pourer provided. It was actually to the middle of the two lines. Then we were told if someone wanted a full glass of wine, that was a pour to the top line and would require five tickets. I wish we had continued the experiment since I can almost guarantee that five pours (five tickets) was way more than the top line meaning the customer was overpaying for the full glass. But the main point was we were told only a maximum of two pours could be given period.

Anyway, I arrived at the Saddlehorn Winery table and met owner Steve Morgan who we have met in the past. He was pleased I would be working at the table and was almost going to tweet me (via Twitter) in the morning when he saw my tweet about going to the festival. Unfortunately Steve had to go back to the winery for a wine club pick up party.

The crowds started picking up as the day went on, the weather stayed nice, and everyone seemed to be having a great time. We also got to see some of our old winery friends who we have seen before either at their winery or at other wine festivals.

There were a couple other snafus by the Montgomery wine festival people in charge and I learned later why. For some reason last year’s festival, which was probably the best managed festival we have volunteered at, had a completely different panel of people arranging the festival than this years. I can certainly understand why some people who are volunteers decide not to do it again the following year, but the knowledge of what went right and what went wrong should be passed to the next year’s panel.

It was a fun time working the festival but next year we will get some clear answers regarding issues which happened this year before we volunteer again. If we do not volunteer, there is no doubt we will be attending the 2013 Montgomery Wine & Music Fest.

For photos from the festival, please see our Facebook page and look for the Photos album.