There is a danger out there but not everybody has heard of it and what it can do. I had not heard of it until we visited the High Plains of Texas and visited vineyards. It is simply called 2,4-D and sounds innocent but can cause a lot of damage. What is it and why should you care? 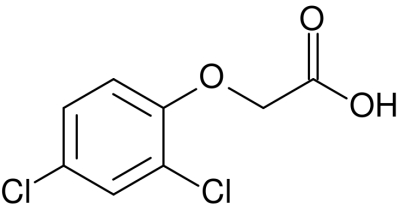 2,4-D’s technical name is 2,4-Dichlorophenoxyacetic acid but is simply called 2,4-D. It is the most widely used herbicide in the world and third most commonly used in North America. The herbicide is used in many products, including homeowner products, to kill broadleaf weeds. Take a look at the chemicals used in your home weed killing products and you will probably find 2,4-D as an active ingredient since Dow Chemical uses the herbicide in a number of products.

The primary reason 2,4-D is used is because it is effective and inexpensive. The problem with 2,4-D is the liquid easily changes to a gas letting it drift to other areas and then it ends up on other crops. An excellent description about the drift problem and crop damage was written by Marcia Ishii-Eiteman from Pesticide Action Network North America (PANNA) in her post called “Drift happens.” 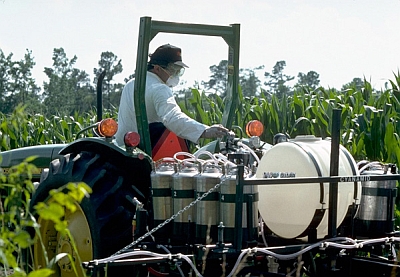 When we visited the High Plains we toured some of the vineyards with Dusty Timmons, grape grower with his Twin T vineyard and VP of Commercial Viticulture Production at Texas Custom Wine Works. We viewed over 20 vineyards and later learned from Dusty that out of that many vineyards, only two did NOT have 2,4-D damage. Because the gas drifts, Dusty said, “The problem is the leaf deformity that the 2,4-D causes. This will negatively impact next year’s harvest, and if it happens every year, will ultimately kill the plant.”

Dusty continued, “Where you are determines what 2,4-D is used for. In ranch country it is used to control broadleaf weeds in pastures, improving the forage for cattle. In Terry County it is used as a pre-plant burn down herbicide in cotton and peanut fields. This is due to the fact that it controls many hard to kill weeds, such as Russian thistle and marestail (aka horseweed). It is also effective on glyphosate resistant pigweed.

“I don’t mind farmers and ranchers using it as it is an excellent tool for them. However, the problem is when it is used after bud break. Early in the season it can cause significant problems with berry set as it is very destructive to developing clusters. Severe drift can also cause fruit set issues the following season as well.

“What makes it so difficult is that it is very volatile. It easily changes from a liquid to a gas. In this form it can drift very easily and can cover a long distance. This makes it difficult to determine the source of the drift. Because of this, most of the damaged vineyards have no recourse to recover lost yields and training costs.

“Currently I am aware of at least four complaints that have been filed with the Texas Department of Agriculture. Currently the vineyard that shows the most promise to be a premium vineyard was hit very hard this year. Since the vines there are very young, I am concerned that many will have to be replaced if the grower doesn’t just abandon it altogether.”

I took a photo of a 2,4-D damaged grape leaf during our vineyard tour and included that in my blog post about our tour. As a result of the photo, Lisa Toy from PANNA contacted me for permission to use the photo I had taken. Coincidentally Lisa was in the process of finishing a brochure for PANNA on their coalition on the 2,4-D resistant corn campaign. 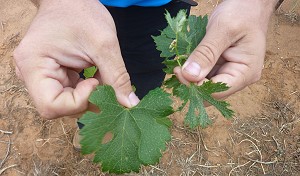 To give a little background, Monsanto is a company who produces the herbicide Roundup containing the active ingredient glyphosate. Glyphosate is the most widely used herbicide in the U.S. In 1996, Monsanto produced genetically modified Roundup Ready soybeans resistant to Roundup, followed by Roundup Ready corn, soy, cotton, wheat, and more. In the meantime several weed species known as superweeds have developed resistance to Roundup.

Dow Chemical plans on marketing genetically engineered (GE) 2,4-D resistant crops which are resistant to the chemical as an alternative to Roundup Ready crops. Approval from the Department of Agriculture is pending for 2,4-D resistant corn.

From Lisa’s brochure, “2,4-D corn enables farmers to spray more frequently throughout the season, increasing the likelihood of spray and volatilization drift, especially in hot summer weather. Non-target crops such as grapes and tomatoes are highly susceptible to damage from drift, particularly if sprays continue later in the season when fruit, tree, and vegetable crops have leafed out.

“As we’ve seen with Roundup Ready crops, the expected increase in 2,4-D use will lead to more herbicide resistance and the emergence of more superweeds. Further reliance on 2,4-D and similar herbi­cides places the burden of increased costs and health risks on farmers, workers, their families, and local communities.”

Damage caused to neighboring grapes is only one of the concerns from using 2,4-D. Emma Lookabaugh from the North Carolina State University Plant Disease and Insect Clinic (NCSU PDIC) wrote an article about “Herbicide Injury to Tomatoes” as another example of a crop being damaged from 2,4-D. 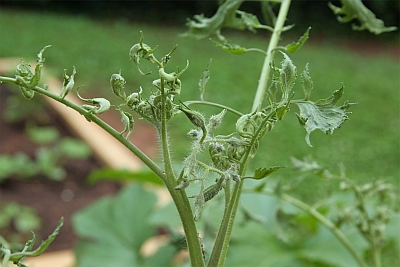 Dusty Timmons informed, “Due to 2,4-D’s widespread use in grain crops and because it doesn’t affect grasses, both Oregon and Washington have had significant problems with it and lead the way in research on 2,4-D’s impact on vineyards. Much of the information used throughout the country comes from universities in those states.”

But it is not only universities, organizations, and growers who are concerned with 2,4-D damage, but also the customer of the growers. In the case of the grape growers, it is the wineries. After the wineries, their customers are us who will eventually feel the effects from the use of 2,4-D.

Merrill and Paul Bonarrigo from Messina Hof Winery & Resort also experienced the damage first hand when they visited their vineyards located in the High Plains in June. Merrill Bonarrigo used Twitter to express their shock with this photo and status (translated from the 140 character limit of Twitter), “Have you seen what 2,4-D damage does to grapes? Write Dow Chemical and the Texas Department of Agriculture! Every vineyard we saw has it.” 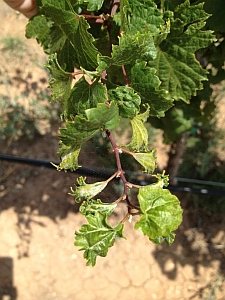 Besides Dow’s 2,4-D resistant corn trying to get approval, Dusty Timmons gave additional information. He said, “In the next couple of years Monsanto will be releasing cotton varieties that are immune to 2,4-D so I anticipate that its use could explode across the entire cotton belt. This has the potential to significantly impact the High Plains. Grape growers are hesitant to report damage because they do not want to upset their large cotton or corn producing neighbors because it could lead to more significant problems down the road. It is a very touchy situation. One vineyard was forced to pull out some older Pinot Noir a couple of years ago because it was going to cost too much to retrain it after being hit hard two of three straight years. 2,4-D is as much a fear for producers in Texas as hail and frost. It is just one that doesn’t get as much play because no one wants to really rock the boat.”

So there you have it. Now you know what 2,4-D is and why you should care. To learn more, please download Lisa Toy’s brochure when available and check the other links provided in this post. If you do a search on the web for “2,4-D” you will find many references to the chemical and be more fully informed.

There are a number of things you can do to express your concern about 2,4-D drift besides the information in the brochure which says “Contact your county’s University Extension agent or Agricultural Commissioner.” They are:

Great article…. Wine and grapes…always something new to learn…too many forget wine is an agricultural product.

Share this
MENU
wpDiscuz
2
0
Would love your thoughts, please comment.x
()
x
| Reply
Send this to a friend