We have had the pleasure of meeting Bill Freidhof, Vice President Sales and Marketing, along with Jason Centanni (@LlanoWineJasonC), assistant winemaker at Llano Estacado, in Houston. Whenever there is a #TXWine Twitter Tuesday chat that involves Llano Estacado wine, there are always a number of representatives from the winery participating including Mike Laughlin (@LlanoWineMike), tasting room and event manager. Chris Hull is the winemaker at Llano Estacado and I was looking forward to meeting Mike and perhaps Chris.

No private events are held at the winery since the facility is primarily a production facility. They do hold three large events each year at the winery. We learned late the timing for our Lubbock trip was bad as one event held at the winery is the Wine and Clay Festival which was going to be held the same weekend we planned on visiting the winery. The timing was bad because that meant there would be no tours given during the festival and the complimentary tours are usually held every half hour. Fortunately, when I contacted Mike Laughlin, he was very accommodating and we arranged to come in the day before the festival began. We would still be able to get a tour while the vendors were setting up their booths inside the production facility. 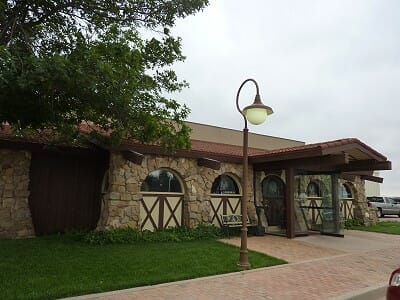 We arrived at the winery and noticed the three-acre estate vineyard next to the winery. We learned they purchase most of their grapes from around Lubbock, including the Mont Sec Vineyard east of El Paso. There are instances where Texas does not grow enough grapes to supply their demand so they have to buy grapes outside of Texas, primarily New Mexico. We were told they use 90 percent Texas grapes. 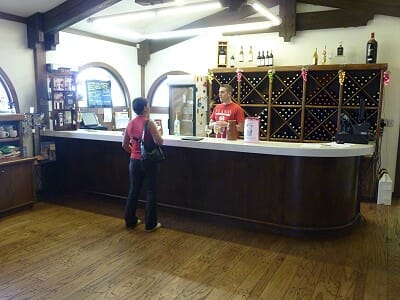 We entered the tasting room and met Mike Laughlin and since he was busy helping get the festival set up for the next day, he let Kelly give us a tour of the facilities. Kelly started the tour and at the beginning was an exhibit on how barrels are made. This was very interesting and we couldn’t recall another winery tour having anything like this. She told us about previous events they have held at the winery and one was where people were to make items out of chocolate. There were two items previously made including a motorcycle rider which was impressive. 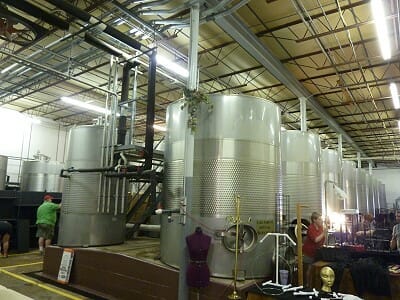 There are fifty thousand square feet of facilities on 15 acres which include administrative offices, tasting room, and production facilities. In 1976 Llano Estacado Winery produced 1,300 cases of wine, but today they are the largest premium winery in the state of Texas and produce 160,000 cases of wine a year and are capable of producing over 225,000 cases. Their wines have been served at the White House and distributed even to Europe and Asia.

You could tell Kelly had given the tour many times as a lot of information was presented. We walked through part of the production facility which included some of the tanks and barrel room while the vendors for the next day’s festival were setting up. The tanks were the largest we had seen and she said there were bigger ones in the building behind the front building. It would have been interesting to see those tanks. 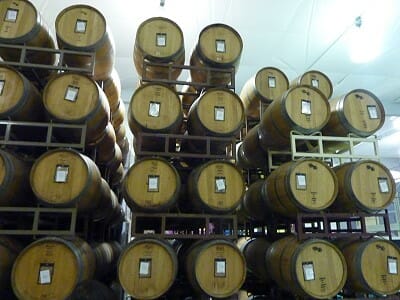 We returned to the tasting room where Mike and Kelly were able to guide us through a tasting of their Texas wine. Tastings are complimentary at Llano Estacado for five wines. You stand at the tasting bar and the tastings are poured from the bottle. Llano Estacado uses both corks and screw caps in their wines. Crackers and chocolate are available to cleanse your palate during the tasting.

While enjoying the tasting I asked what Llano Estacado actually means. It is actually a region that encompasses parts of eastern New Mexico and northwestern Texas and is one of the largest mesas or tablelands on the North American continent. This was not going to be the last winery we visited near Lubbock named after the local geology.

Unopened bottles of wine were above the tasting bar and one in particular which struck me was a 1984 Llano Estacado’s Chardonnay. We learned it was a bottle which in 1986 received a Double Gold award at the San Francisco Fair and was the first national award given to a Texas winery. Kim McPherson was the winemaker and the 1984 Llano Estacado Chardonnay was made with grapes from the Leftwich-Slaughter Vineyards. Doing a little research afterward, the vineyard is commonly referenced to as Slaughter-Leftwich, but the bottle clearly states, at least at that time, it was Leftwich-Slaughter Vineyards. 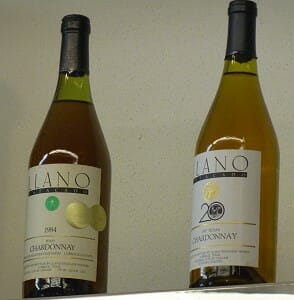 Llano Estacado Winery has a wine club and the tasting room has a very nice large gift shop with such items as wine accessories, baskets, decorations, gourmet food, and clothing.

Since we have purchased many bottles of Llano Estacado wine at our local supermarket and liquor store, we asked Mike which wine was the most popular seller. His answer surprised us but when you look at the trend of wines being sold in the United States today, it really isn’t. The answer is their Sweet Red which is made from several grape varieties including Syrah, Merlot, and Cabernet Sauvignon.

Our tasting was over and we thanked Mike and Kelly for spending their time with us. We had a nice time visiting Llano Estacado Winery and would recommend visiting when you are in the Lubbock area.