Cap*Rock Winery is located in Lubbock and is owned by Catherine Bodenstedt. Phillip Anderson is the General Manager and Michael Vorauer is the winemaker. Catherine Bodenstedt purchased the winery in August 2010 after multiple auctions. Instead of retelling the story of the auctions and other proceedings, please read the blog posts on VintageTexas starting at http://vintagetexas.com/blog/?p=2243. 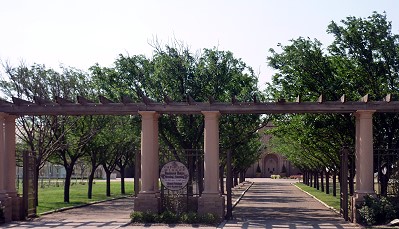 We arrived at Cap*Rock Winery when they opened and as soon as we drove to the entrance, we immediately had to stop the car. It’s a good thing nobody was behind us. There was a gorgeous entrance in front of us with enter and exit roads, and further down the right road you could see the winery with its welcoming doors. I had to jump out of the car and start taking photos because I had a hunch. Sure enough, when Gloria and I were deciding on our 2012 TX Wine Lover Awards, we believed Cap*Rock Winery has the Best Entrance. 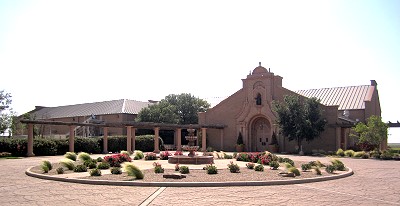 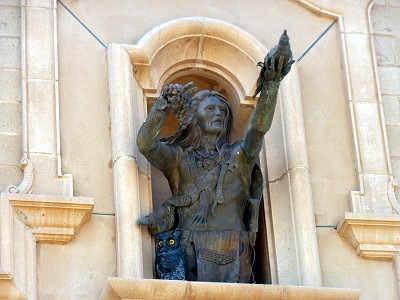 We proceeded to the winery and were still oohing and aahing as we took more photos, and we hadn’t even gone inside yet. There is a Native American statue over the doorway presenting his offerings. We finally made it inside and entered the tasting room with the tasting bar on the right and a seating area on the left including couches and a fireplace. As it turned out, another TX Wine Lover award went to Cap*Rock Winery for Best Tasting Room. 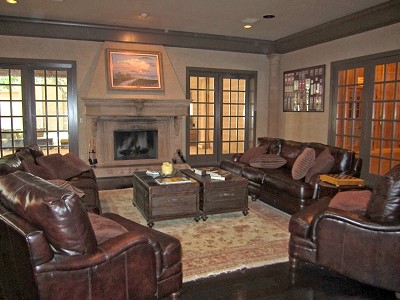 We were greeted and unbeknownst to us, General Manager Phillip Anderson had been waiting for us. We met Phillip and he started us on a tasting with the help of some of the other tasting guides. There is a tasting fee for up to seven wines which includes an engraved tasting glass. And what a glass it is! We were shocked when Phillip took the glass and banged it on the edge of the counter and it didn’t break. He said it was titanium-based and virtually unbreakable. He did tell the others though the other day one did break when he did the demonstration. But the tasting fee is worth it just for the Schott Zwiesel wine glass, and it will be used often in our house to avoid any clumsiness (that would be me). 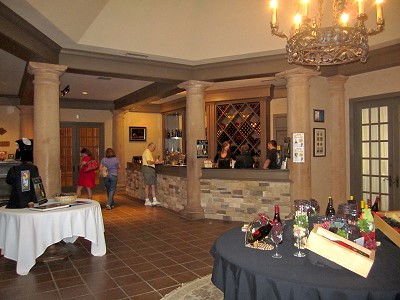 The tastings are poured from the bottle while you stand at the tasting bar. Wine crackers are provided to cleanse your palate. The winery uses both corks and screw caps and Phillip said they will be switching soon to use screw caps for any wine which will be chilled.

Since the winery was purchased with existing inventory, they are using the inventory and when that is gone, changes will be made. For example, right now Cap*Rock Winery uses 75-80 percent Texas grapes. Phillip said to give them two years and they will be using 100 percent Texas grapes in their Texas wine. Right now other than Texas grapes, they use grapes from California. When the existing inventory is gone, they have made the decision if they cannot make a wine from Texas grapes, they are just not going to make it.

In addition, one of the upcoming changes will be the wine bottle labels. I had to ask what the design was on some of the bottles because it looked a little unusual to be on a wine bottle. Phillip explained it was a design of the Caprock Escarpment which is an outcropping of rock that stretches to the north and south for about 200 miles, and is part of the Llano Estacado (see Llano Estacado Winery for an explanation of that region). This was not the first time we had heard the geology formation of Caprock during our visit to the High Plains. Phillip did say they were going to be redesigning some of the wine bottle labels and showed us a possible redesign.

During our tasting we were lucky to be able to taste some wines which had just been bottled such as a Pinot Grigio made from Reddy Vineyards grapes and a 2010 Merlot. Cap*Rock had just received their results from the 2012 Lone Star International Wine Competition and we learned their Orange Muscat had received a Grand Star Award/Gold Medal/Double Gold Award. That was great to hear because earlier this year when we held a blind taste test in the Battle of the Texas wine Orange Muscats, Cap*Rock Winery’s Orange Muscat was the preferred Orange Muscat among the eight wines tasted. Hmm, perhaps we have a good panel of judges so look for more blind taste tests to come in the future.

Tours are available at the winery so after our excellent tasting, we were told to bring our glasses and Phillip gave us a tour of the winery. Besides Llano Estacado Winery’s tour, Cap*Rock Winery was the largest production facility we have seen in Texas and Phillip gave an extensive and very informative tour. Even though weddings are already popular at Cap*Rock Winery, they are building a special vineyard with arched walkway in front of the winery especially for events such as a wedding. 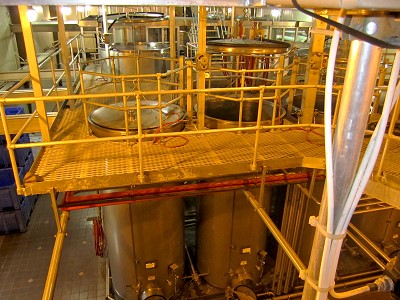 We learned various things during the tour such as the winery can produce 80,000 cases of wine a year, but this year the total will be approximately 20,000 cases. During our tour we had the privilege of tasting the wine from various tanks and climbing on the catwalk above the large tanks to peer down into the tanks. When we got to the bottling line and another tour was being given, Phillip stepped in and gave both groups the rundown on the bottling process. We arrived back to the tasting room after the informative tour. 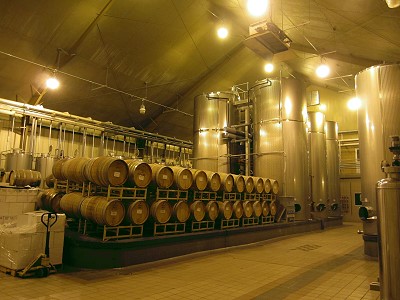 Events are very popular at the Cap*Rock Winery. The facilities include a barrel reception hall that can accommodate up to 250 people, a bridal suite, large tasting room, large lighted outdoor patio, full catering kitchen, 11 foot HD projection screen, professional sound system, and much more. Events such as dinners, live music, wine classes, and even comedy nights are held at the winery.

There is more than one wine club at Cap*Rock Winery with a focus on red wines, white wines, or a cross-section of wines. A nice gift shop is present with clothing and wine accessories. 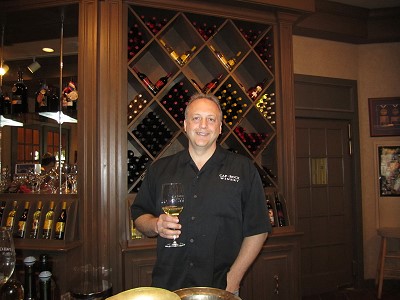 It was nice of Phillip to take the time to spend with us and I could go on and on with all the information he gave us about the winery and its operations, but that would require multiple blog posts. Needless to say, we were very impressed with Cap*Rock Winery and can only look for good things to come from them and their Texas wine. When you visit Lubbock, Cap*Rock Winery is a must see.