Bar Z Winery is owned by Monty Dixon and the winery is named after his family’s cattle brand. The winery was founded in 2003 in Monty’s hometown of Morse and since then the winery has outgrown two locations. Bar Z Winery was relocated in 2009 to Canyon in the Texas panhandle.

After flying into Lubbock, we went directly north to Canyon to visit Bar Z Winery. This was our first time in the High Plains and now we know why it is called that. Besides the elevation averaging 3,500 feet there is a lot of growing happening in the flat plains of the area. When we arrived at Bar Z Winery though, the view changed as the winery overlooks part of the Palo Duro Canyon. 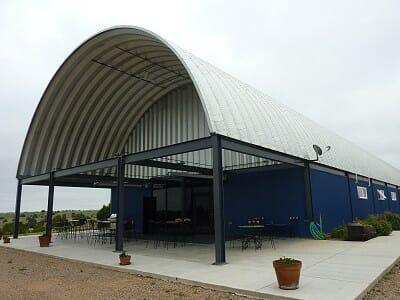 We were told to call when we arrived to get the code for the security gate as the winery is located down a road behind the gate. When we arrived though, the gate was open so we didn’t need to call. We reached the winery and it looked like a massive, corrugated steel Quonset hut. The large back doors were open but it didn’t look like an entrance, so we walked along the side of the building on the sidewalk to the other side of the building. Indeed that is where the front entrance is located. The front is also where you get to see the impressive view of the canyon.

Entering the winery, we met owner and winemaker Monty Dixon. He was seated with a gentleman and said he needed to finish with him and to feel free to wander around the winery. We walked through the dark barrel room and arrived in the production room. After looking around we went back to the front to wait for Monty. He soon finished with the other man and led us to the production room again because it was time to taste some wine. 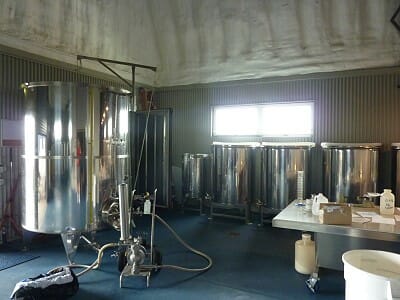 Monty was in the process of finishing his first 2007 Tempranillo with grapes from Newsom Vineyards and wanted our opinion. He poured some glasses from the stainless steel tank and we got to have our first wine of the day to quench our thirst. Monty said he usually is the only one to determine how a wine is coming along so he likes to get feedback from others, but being where he is located, he can’t go down the road and ask a fellow winemaker. Gloria enjoys Tempranillo so she gave her opinion of the 28 month barrel aged Tempranillo.

In the back door walked another man and Monty knew him. We all greeted each other and it turned out he was Robert “Bob” Wonacott of Eperon Vineyard (@eperonvineyard). I have been following Bob on Twitter and told him we would be visiting Bar Z if he wanted to make the drive and meet us there. As it turned out, he and Monty have known each other for years so he was no stranger.

Monty explained how he uses the grapes which come in. They are crushed and destemmed, get put right back in the harvest bins, and then taken to a location to freeze them. Every wine he makes has had the grapes frozen. This way he can pull them out any time he wants, even in the winter. They bring the frozen grapes back, put them back through the crusher and destemmer, they liquefy, and get put in the tanks where Monty can then begin to work with the fruit. Because of the freezing of the grapes, this allows Monty to have flexibility and time in the winemaking process.

We also got to see a sneak preview of the new wine labels Monty wants to change to. When asked why he was changing the labels, he simply said they have been around for ten years so it’s time for a change. 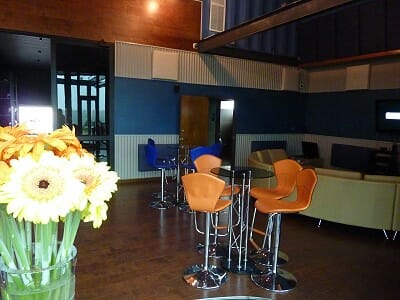 We all went back to the front and Monty started a tasting for us. There is no tasting bar at Bar Z Winery as Monty does not like standing behind a bar while the customers are on the other side, so he would prefer to be in the front by the customers. In our case, we sat at a table to do the tasting. Most of the tastings at Bar Z are done at events the winery holds such as live music, weddings, corporate events, and private parties.

Monty presented the first wine for us which was his 2009 Chenin Blanc. He pulled the cork and poured from the bottle. We were kind of surprised the white wine was not chilled and inquired about it. Monty said if he can get away with it, he likes people to drink his wines unchilled because he thinks a good white wine which is chilled doesn’t present all its flavors as the chilling hides those flavors. We then agreed that room temperature is different for all people and they need to understand what real room temperature is. I asked him what temperature this particular wine was, and this is where the humor of Monty comes out, as he said, “That was sitting on the cabinet in the lab temperature.”

Bar Z Winery only uses 100% Texas grapes from the High Plains. When asked how many cases of wine a year he makes, he said that is such a tough question to answer. He gets asked that and he just throws out a number. That number right now can range between 1,000 and 1,500 cases.

We then moved on to taste Bar Z Winery’s red wines with the capsule of the bottle sealed with wax instead of foil. The first red wine was a 2004 Sangiovese from Martin’s Vineyard, and then tasted a 2005 Sangiovese, followed by a 2006 Sangiovese from a tank. After the Sangiovese, we ended the tasting with a 2004 Cabernet Sauvignon from Newsom Vineyards.

During our tasting, we learned that Monty had built the winery first which took four years to build. Because of the way the Quonset hut was built with the rings, they could not add another ring if there were any winds over 10 mph which happened quite often. Out of the four years it took to build, the wind probably added an extra year. During the building of the winery and before, Monty and his family have now been living in an RV next to the winery for seven years. They are in the process of finishing up a house next to the winery. 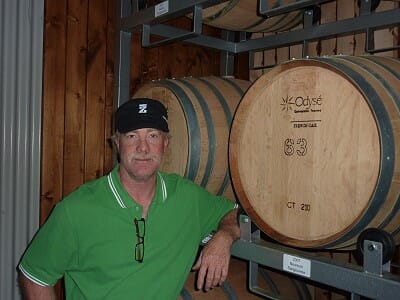 We walked to the barrel room which has ceilings 15 feet high. Bar Z Winery only uses French Oak barrels for aging their wines so they can create an old style wine. We ended back in the production room where we said our goodbyes and thanked Monty Dixon for his hospitality and the great time we had.

If you are near the Amarillo area, just head a little south to Canyon, or if you are in Lubbock head north, and you will find a wonderful winery which makes great Texas wine.