We finally got vacation days approved and our first trip to the High Plains and Lubbock area began. We had the choice of driving nine hours or flying for one hour and in the interest of time, we chose the latter. We enjoyed the United Club room at the Houston airport while waiting for our plane to leave and everything was going well until we landed in Lubbock and went to get our rental car. You can say it was a comedy of errors but there was no laughter happening with all we went through.

But we finally got on the road and headed directly north to Canyon to visit Bar Z Winery. I had called ahead to make sure they would be open since it was a 90 minute drive one way and I didn’t want to make a trip just to find out they were closed. I talked to Greg, owner Monty Dixon’s assistant, and was told they were going to be there and to call when we got there for the code to the security gate.

I have been following Robert “Bob” Wonacott on Twitter (@eperonvineyard) from Canadian, Texas where he owns Eperon Vineyard. He has been fun to talk to on Twitter and even invited us to stay at his ranch whenever we wanted to. Since Canadian is almost to Canada (just kidding), I told him we would be visiting Bar Z Winery and would love to have him meet us there if possible. A week before the trip I heard he was planning on it but didn’t hear anything after

We found Bar Z Winery and the security gate was open so we didn’t need to call. The winery was at the end of the road, and the actual end of the winery which faces the road is the production facility and it had its large doors open. We weren’t sure to go in there but there was also a sidewalk which led down the long building and perhaps the entrance was there instead. It was. We walked in the dimly lit winery and owner and winemaker Monty Dixon was seated at the table with another gentleman. He greeted us and said he needed to finish up working with him and to feel free to wander around the winery.

We walked through the dark barrel room and arrived in the production room. After looking around we went back to the front and sat to wait for Monty. He finished and then led us to the production room again because it was time to taste some wine.

Monty is in the process of finishing his first Tempranillo with grapes from Newsom Vineyards and wanted our opinion. He poured some glasses from the stainless steel tank and we got to have our first wine of the day to quench our thirst. Gloria enjoys Tempranillo so she gave her opinion.

In the back door walked a gentleman along with his bulldog and Monty knew him. We all greeted each other and it turned out he was Bob Wonacott. I had never seen a photo of Bob so it was great seeing he did make the trip to the winery. As it turned out, he and Monty have known each other for years so he was no stranger.

We went back to the front and Monty started a tasting for all of us. I will go into more details in another post on the tasting. During a break while Monty went in search of the next wine to taste, we learned from Bob that his Eperon Vineyard has 20 acres of vines right now. 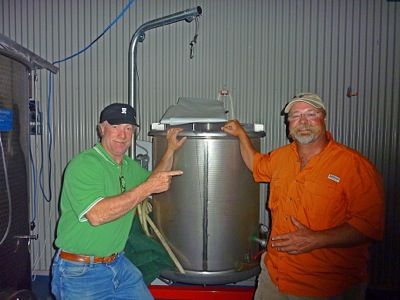 During the tasting another friend of Monty’s came in and we met Belinda Rivas. She and her husband Charlie have a one acre vineyard just north of the winery. As I learned later, she had actually come to pick up some chemicals Bob had brought for her. She was also fun and joined our tasting group.

Soon I realized we had been there for two and a half hours. The time had flown by as we all had a great time talking and enjoying Monty’s Texas wine. We had to leave though because we had a three hour drive to the other side of Lubbock to get to where we were staying for the trip, Newsom Vineyard’s Rock’n-N Bed and Breakfast. We said our goodbyes and promised the next time we were in the neighborhood we would stop by again.

Our trip south down the highway was uneventful until I received a phone call from Neal Newsom asking how our progress was. We were going to be about 40 minutes late from what I had earlier told Janice Newsom since we had so much fun at Bar Z Winery. He asked if we would be tired and ready to go to sleep or if we would like to have a glass of wine. Needless to say, I didn’t really need to ask Gloria but I did anyway. 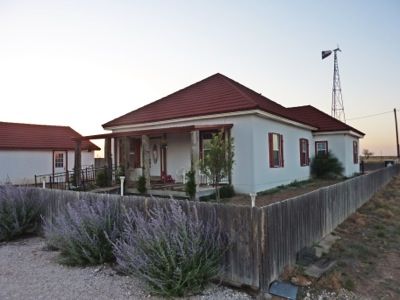 We found our way to Neal and Janice Newsom’s house and Neal was waiting for us on the front porch. He came out to greet us and we went inside to meet Janice. There were already some wine bottles set up on the kitchen table. All wines were obviously from wineries which had used Newsom Vineyard grapes, and we let Gloria make the choice as which one to drink. We had an enjoyable time visiting with the Newsom’s, learning about each other, learning about grape growing, and enjoying the Texas wine.

At the end of the evening, which we suddenly realized went past our usual bedtimes, three bottles of wine were gone. It was a perfect ending to a short day in the High Plains.