We finally had the chance to make the journey northwest to the Way Out Wineries wine trail for the weekend. Our first visit of the day was to Pillar Bluff. We had visited Pillar Bluff before but that was before the ideas of this blog came up. Owner Gill Bledsoe was in the tasting room and welcomed us in as we were the first customers to visit the winery on the Friday. Later two other couples came in and Gill said that was unusual for a Friday morning. 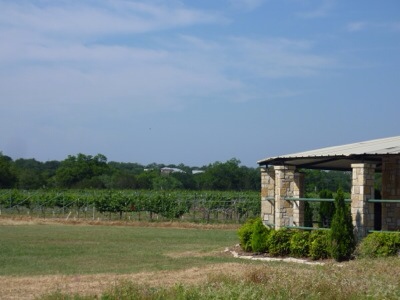 We said goodbye to Gill and without us saying anything, he knew we were heading next door to Texas Legato to see his sister-in-law Sulynn Bledsoe, and jokingly asked if we needed directions since they are literally .2 miles down the road.

We arrived after that long drive to Texas Legato and Sulynn Bledsoe recognized us when we walked in. We had seen her last at the Houston Wine Festival last Fall and she says I look exactly like one of their friends – poor guy. Sulynn was just finishing up cleaning up the tasting room and we began our tasting. We learned Sulynn and Bill Bledsoe actually live in Arlington making it a three hour round trip drive to the winery for them.

We were enjoying our tasting and another couple arrived, one of the couples from Pillar Bluff. We all laughed but their arrival wasn’t totally unexpected since the wineries are so close. We were pretty sure we wouldn’t see them at our next winery Brennan Vineyards though, since there were other wineries in between. 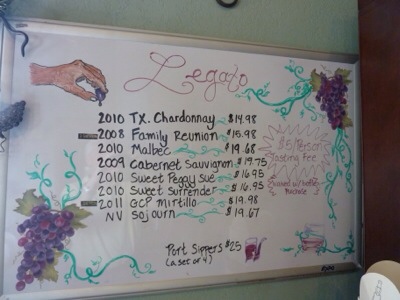 Sulynn was a lot of fun and the tasting was enjoyable. We shared their Port style wine served in a tiny Port sipping glass which had a glass formed straw on the side. I tasted it first and I guess Gloria did not see me drinking it. When she went to drink it, she drank from the large glass opening instead of the straw, and ended up spilling the wine from the straw on her leg. No big deal as Sulynn was there to provide a towel to wipe it up. We occasionally like Port at home so we bought a set of the sippers.

We finished our tasting and headed to Brennan Vineyards. I have been following winemaker Todd Webster (@txviognier) on Twitter and we message back and forth, but have never had the chance to meet in person. I tweeted to him we were on our way so he would be ready.

We arrived at Brennan Vineyards and Gloria was immediately impressed with the three large buidings comprising the campus. Entering the tasting room we met Tina Marken, hospitality director. She texted Todd and while we were waiting, wouldn’t you know it, but the couple who had been at Pillar Bluff and Texas Legato showed up. We had a bigger laugh this time and they swore they weren’t following us, but were on their way to Dallas and decided to visit wineries along the way. They were a nice couple to taste with.

Todd arrived after the start of our tasting and we had a nice conversation with him while he took over pouring our wines to taste. During our tasting co-owner Trellise Brennan visited the tasting room and we took a photo of her and Todd together. Later on, Pat Brennan walked in and we were able to get a photo of the three of them this time. Everybody was so nice. We finished a great tasting with Todd and he then gave us a tour of the winery. It was definitely an impressive production facility and event center. 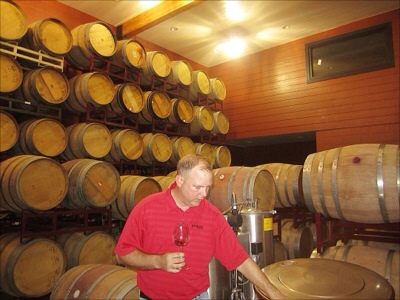 After saying goodbye to Todd and Tina, we headed next to say hi to Jim and Karen Johnson at Alamosa Wine Cellars. We were going to visit another winery on the wine trail but we were running short on time so we’ll need to come back sometime. We arrived at Alamosa and Jim Johnson was there who greeted us. We asked which wines were new and tasted the new wines Jim had made. Fortunately we can now buy most of Alamosa’s wines locally.

Our last stop of the day was San Saba Wine Cellars in appropriately enough San Saba. They have not opened yet but Mike and Lynn McHenry had invited us to visit and we gladly took them up on their offer. I have been following their well-documented website and Facebook page with the construction of their winery and it looked like it was going to be very nice. The question though was how good were the wines.

I called Mike to let him know what time we would be arriving and we met him and Lynn across the street from the winery since the winery was still under construction. They gave us a tour of the construction and told us of their plans and goals. It then came time to try some of the wine they already have. I’m going to have to leave you in a little suspense though as that will be an entire blog post on its own, but let me just leave you with one word: wow.

We promised we would be back to visit when the winery was open, and after eating some local barbecue, it was time to call it a night.

MENU
Send this to a friend