The NICE Winery is located in Houston and is owned by Ian Eastveld and Ryan Levy. Their first wine vintage was 2007 and they opened The NICE Winery in 2009. If you are curious like I was, NICE is pronounced just like a nice glass of wine but it is actually an acronym for the first names of Ian’s siblings with Ian making up the I in NICE. When being told the story, we were not sure if it was a joke or not, but it was said they may add an R for Ryan to make it NICER. Either way, the wines could not be nicer. 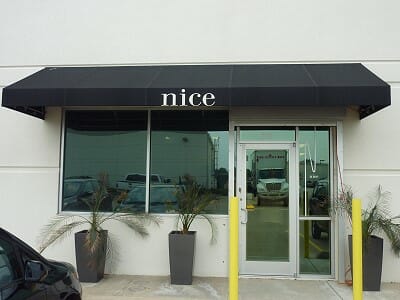 We first met Ian and Ryan at the Houston Wine Festival last year and Gloria signed up for information emails. She mentioned they had a tasting coming up and since we have wanted to visit them, we RSVP’d yes. We arrived at their winery which is located in an office park. We were greeted at the door by Donna, signed in, and were directed to the tasting table.

Michelle was pouring wines and the first wine poured was the 2010 NICE Sauvignon Blanc of which 400 cases were made. The wine was made in Argentina by Ian and Ryan along with acclaimed Argentine winemaker Manuel Otero Ramos. The grapes come from the famous Lujan de Cuyo appellation in Mendoza. 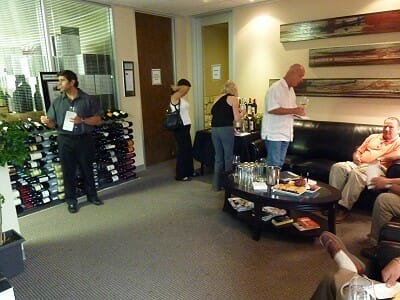 We talked to Ryan and he told us the story of how they make their wines. Ian and Ryan, both Le Cordon Bleu trained chefs and Certified Sommeliers, visited Argentina and different vineyards to find one for which they could make their wines. They finally came upon a grower who has their house in the middle of the vineyard, and after several wonderful visits partnered with the vineyard. The growers do have a small winery but make wine just for the locals. Ian and Ryan visit Argentina to make the wines there. Ryan stressed they are not growers but winemakers. Barrels are brought in to age the wines in Argentina. They use about 85% French and 15% American oak barrels.

The next wine during the tasting was not made by NICE, but selected by them as with other wines they offer to their wine club members. Speaking of wine clubs, The NICE Winery started a wine club in January 2010. There are three wine clubs available. The Premium club receives two big bold reds every month, the Discovery Reds club gets two new and unique reds from all over the world, and the Discovery club gets one red and one white. Since currently The NICE Winery offers four wines, Ian and Ryan hand select which wines from other wineries to include in their monthly wine club shipments. Each wine club option offers other benefits such as the tastings and dinners. Wine classes are also occasionally held by the winery.

The third wine tasted was the 2009 NICE Malbec which was also made in Mendoza. This time Ian and Ryan combined their efforts with winemaker Alberto Cecchin. The grapes came from eighty year old vines, were hand harvested, and used family cultivated techniques. This was a very nice Malbec and after last month’s vertical tasting of their 2007, 2008, and 2009 Malbecs, they were told the 2009 was most similar to the 2007 award winning Malbec.

When talking to Ian, I had to ask about using Texas grapes. His reply was there are not enough grapes in Texas, so they looked at states and countries where they could get quality sources. They have visited the High Plains and met many of the growers and winemakers there and are hoping to someday use Texas grapes to perhaps make a Tempranillo. 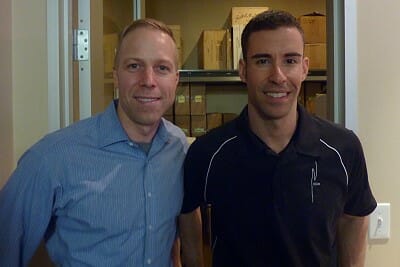 There were a total of six wines which were being tasted and the remaining three we had to taste were made by other wineries. We learned The NICE Winery made a 2010 Demi-Sec Sparkling Wine from Muscat of Alexandria grapes and had to ask about it. Ryan had previously commented how he doesn’t like to buy wines without tasting them first, so Gloria said we were interested in buying a bottle of the Demi-Sec but we hadn’t tasted it yet. Ryan being so cordial said he would check to see if they had one chilled. Luckily they did and he popped the cork for us to try it. Ahh, we’ll take a bottle please.

The entire evening was great as we got to taste some very good wines, met two passionate winemakers, and had fun talking to wine club members. We’ll be back next month to pick up our wine club shipment.