Sunset Winery is located in Burleson and is owned by Bruce and Birgit Anderson. Both also share the winemaking duties with consulting done by winemaker Mike Sipowicz. The winery was opened October 13, 2005.

We arrived at the winery and unfortunately it was a day when Groupon purchases for a tour and tasting were being honored by a large number of people. We went with our new friends Laurie and Shelly Ware and also Dave and Kelli Potter with their daughter Annali. 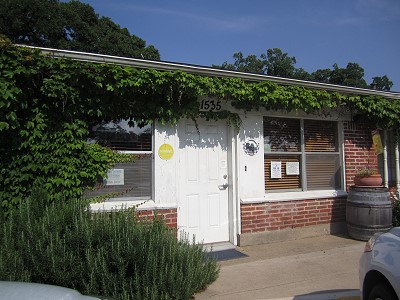 We met Bruce Anderson and thought we would be tasting outside on the wood deck since the tasting room was full, but fortunately I then met Birgit Anderson, Bruce’s admitted “boss,” who said the people in the tasting room would be leaving soon and we could taste in there.

We went to the tasting room and soon six of us filled up the tables. We could stand at the tasting bar too which one of our party actually did. Our tasting guide Dagmar then explained how the tastings worked. There is a tasting fee for six wines and the Port and Vintner’s Select wine counts as two selections. We then went through the list of wines and chose the ones we wanted to taste. Since Gloria and I wanted to taste every wine and the total of selections for each of us would make up all the wines on the list, we did not feel it would be necessary to alternatively select wines from two pieces of paper. I guess we made the wrong decision though as Dagmar admitted it confused things. She eventually got used to the unfamiliar system as she would bring two wines for us both to try. 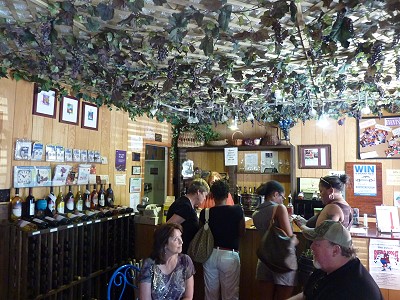 Sunset Winery uses corks in their bottles and the tastings are done using measured pourers. Crackers are given to cleanse your palate.

Before we started tasting, Bruce was very kind to Annali who obviously could not drink wine and she ended up getting grape juice to enjoy. While we were tasting and even though they were very busy, Bruce gave us all a history of Sunset Winery. The tasting room we were in was actually the garage of their previously converted home which they had bought in 1973. They raised their three daughters in the house. Later the Andersons began looking for a bigger house because they needed room to practice their new interest of ballroom dancing. They eventually found a house and one of their daughters bought the existing house in 1993 and lived there until 2003. The Andersons bought the house back and began to convert it into the winery.

Sunset Winery has half an acre of vineyard and is growing Lenoir and Blanc du Bois. They use 100% Texas grapes in their Texas wine except the wines which are made with the acai berry. This was a new berry to us so Bruce explained the berry grows on Palm trees in the Amazon jungle region. He said they are the only winery in the world to make 100% acai wine at this point in time. The acai wines are made in two versions, a dry version and a sweet version. The Acai wines were surprisingly good for a berry unknown to us.

We had a nice tasting with Bruce spending quite a bit of time talking to us and answering questions. When we were done, Bruce was called to the Groupon tour as his duties were being needed. The Wares and Potters had previously visited and toured Sunset Winery, so Bruce gave Gloria and me a very quick tour of the winery. This was just enough time as the Groupon tour arrived and he then had to help them. 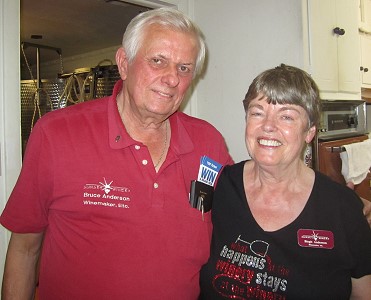 Normally tours are given three times during the day. There is a fee for a tour and a higher fee can get the VIP tour scheduled by appointment only which gets you a tour with the winemaker. With a VIP tour, Sunset Winery can also take your picture and turn it into a label for a wine that you purchase.

There is a gift shop present with wine accessories and clothing. A wine club was started this year in where you tell them exactly what wines you want versus reds or whites which as Bruce called, “Surprise.” Events are held such as a grape stomp.

Sunset Winery is on the Cross Timbers wine trail and the Way Out Wineries wine trail.