Bluff Dale Vineyards is located in Bluff Dale and is owned by David and Theresa Hayes while David Hayes handles the winemaking. A vineyard was planted in 2001 and the winery was opened in 2004.

We were meeting a Facebook friend Laurie Ware and her husband Shelly at Bluff Dale and we arrived just before they did. Driving up to the winery the vineyard is on the right and up on a hill is the winery. Being on the hill, the winery awards a beautiful view of the countryside with hills and the vineyard below. 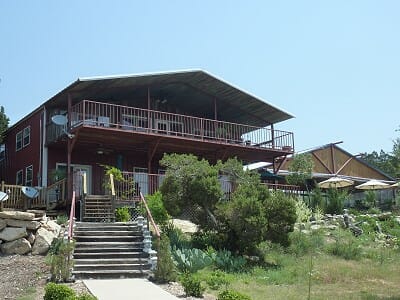 Chris Hayes, son of David and Theresa, greeted us as we entered the tasting room. Soon Laurie and Shelly arrived and we all began a tasting. There is a fee for a tasting for whatever wines they have except the Port which is an extra cost. Tastings are done either sitting at the tasting bar or at a table. The bottles use corks and the tastings are poured from the bottle. Crackers are available for cleansing your palate during the tasting. Food can be purchased during or after the tasting and includes items such as cheese and salami, smoked salmon, and edamame. 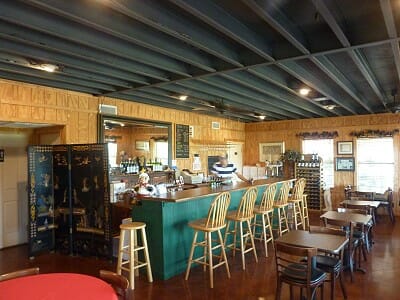 Chris said they use approximately 85-90% Texas grapes in their Texas wine. When they cannot get Texas grapes, they get grapes from California. Chris explained the vineyard below the winery now covers one and a third acres. Next year they plan on having a total of 5-7 acres of vineyards after planting.

During the tasting we reached one red blend called Paragon. Gloria immediately said it smelled like cotton candy which indeed it did. Because of the unique aroma, Chris said he had the thought to set up a booth at the State Fair and offer liquid cotton candy. I’m sure it would be a hit!

Tours are possible at the winery if they are not busy and fortunately for all of us, Chris was able to take us on a tour of the production facility. He explained they do everything by hand from harvesting the grapes, making the wine, and all the way to bottling. He even joked during our tasting if there was an air bubble in the wine bottle, he probably did it. During the tasting we were able to meet both David and Theresa Hayes, and during the tour David talked to us more. Bluff Dale Vineyards produces 5,000-7,000 cases of Texas wine a year. 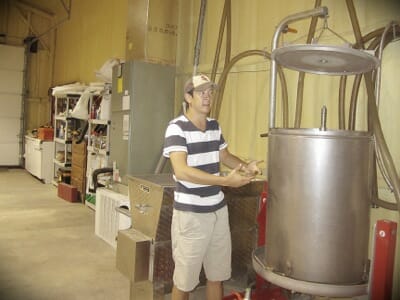 There is a gift shop at the winery with books and other items. A wine club was available from the winery called the Bluff Dale Wine Society but they still inform people of upcoming events. An outside covered patio area is used for live music events every month in addition to other social events. 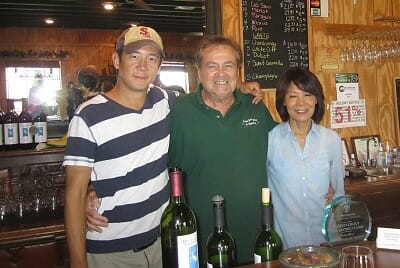 After the tour and checking out, we thanked everyone for their wonderful hospitality. The prices for the bottles of wine at Bluff Dale Vineyards are very reasonable.

Bluff Dale Vineyards is on the Way Out Wineries wine trail.