Barking Rocks Vineyard and Winery is located in Granbury and is owned by Tiberia and his partner of life Sissy Andrews. Tiberia is actually his last name but when he got into the wine business, he thought Tiberia sounded more like a winemaker so he dropped his first name. They founded Barking Rocks Winery in 2002 but did not start selling wine until 2004. 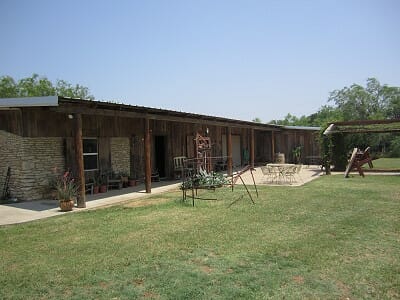 The winery is located on part of what was previously the Helen Knox cattle ranch. The 1968 rock cattle barn was converted into the winery. On the side of the winery is the former HK insignia formed with rocks which was the ranch’s cattle brand. When trying to come up with a name for the winery, Tiberia and friends tried to think of every combination of words for HK but could not come up with anything good. After imbibing some wine, they looked at the insignia again and thought it resembled an animal. The legs of the H were the legs of the animal and the K looked like the mouth of a barking animal, hence the naming Barking Rocks.

When we entered the winery, Tiberia was behind the small tasting bar talking to another man. Tiberia greeted us and introduced us to one of his neighbors. He started us on a tasting of his Texas wines.

Tastings are done while standing at the tasting bar. There is a tasting fee for usually four wines, but can include all the wines he has at the time. At the time of our visit, we were able to taste a total of six wines. The bottles use corks and the tastings are poured from the bottle. 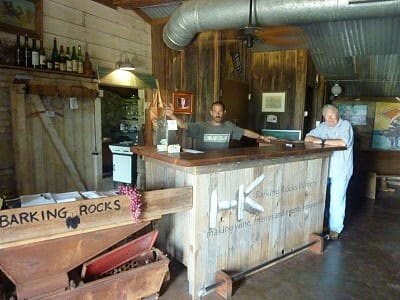 They had recently run out of their white wine so they were providing tastings of Brennan Vineyard’s Three White Chicks, but would be bottling their Roussanne in a couple weeks. Update: It has been a couple weeks since our visit and we have heard the Roussanne is now bottled!

During our tasting, Tiberia explained he uses 100% Texas grapes. He does have less than an acre of Lenoir grapes in a vineyard. He produces 600 to 1,000 cases of Texas wine a year. A couple of the wines produced is Redman which is a blend of local and high plains fruit plus Rock N’ Rose which is a blend of Cabernet Sauvignon, Merlot, and Chenin Blanc.

The converted barn is also Barking Rocks production space and event center. When production of wine is needed, the open area of the tasting room is used. When it’s time for an event, the equipment is rolled out of the way to provide a large room for the event. On the first Friday of every month live music is held. 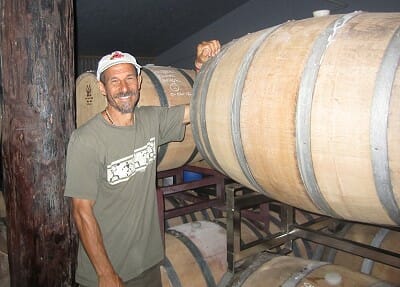 On the far side of the tasting room is the wine cellar. Tiberia showed us the cellar with the oak barrels and stainless steel tanks. One tank was fermenting his strawberry wine called Fragaria and it needed stirring which Tiberia did while we watched. He had used 300 pounds of strawberries from a local farmer. 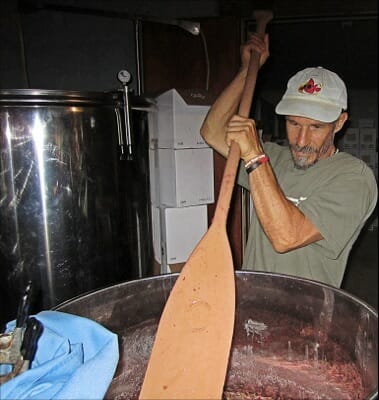 The other side of the cellar is where the cases of Texas wine are stored. This is where Tiberia told us the story of the HK logo and showed us the different variations he has made over the years with the logo which is used on the wine bottles. The first variation was the rock formation with four little teeth in the barking mouth. Another variation has the barking animal wrapped in barbed wire. Tiberia said he usually signs a lot of the bottles he sells. While looking at his signature one time he realized the shape of his signature kind of mimicked the shape of the brand, so he used barbed wire to wrap his signature around the brand.