Dry Comal Creek Vineyards and Winery every month has wine classes which they call Winery U. The topics are always different and are offered at a very low fee of $30 per class or $25 per class when you pre-register for four classes. David King, Certified Wine Specialist, teaches the various classes and sometimes owner Franklin Houser also steps in to offer some education to those in attendance.

I needed to go back to Dry Comal Creek Vineyards and Winery for some information since the last time we visited them was before we started the blog. I also follow David King on Twitter (@kingdr13) and that was an extra bonus to take a class. When the 2012 class schedule was presented, I decided to take the April class of Growing Grapes and Making Wine.

I arrived before the 10:30am starting time and learned the class was going to be held in the production facility alongside the stainless steel tanks. I met David King and we all waited for the rest of the class to arrive. He said normally the classes are held in the tasting room but this particular class he liked holding next to the tanks since we would be tasting from the tanks and also walking into the nearby vineyard. 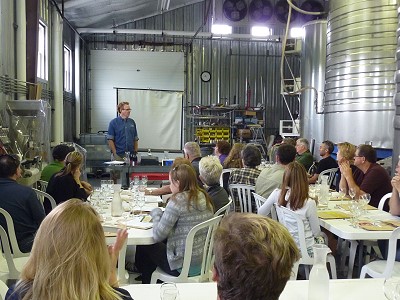 The class started with David showing a video from the television show Dirty Jobs starring Mike Rowe. In the episode, he visited a California winery and learned how dirty a job growing grapes and making wine can be. I enjoy the television show and had not seen this episode from 2007 so it was fun watching it, and with the laughter from others in the class, it seemed they enjoyed it too. It was a great start and introduction to wine making.

We then decided to leave the coolness of the building and head to the vineyard. David explained various things about the vineyard like the growing, pruning, and harvesting. Dry Comal Creek uses a V-shaped trellis system to hold their vines. Other topics of interest were it takes three years to get a mature vine, and the vines want to get as much sun as possible so they are usually planted in a north-south direction.

We then headed back into the building where David continued the class. He told us about grape varieties, the importance of Thomas Munson in the wine industry, and the various steps of the grape vine growth cycle. Next was an introduction to making wine with topics such as Brix, types of yeast, and barrels. Overall, David was very knowledgeable and was able to answer questions the class brought up.

Dry Comal Creek had just bottled their Cabernet Sauvignon and there was also some extra wine in one of the tanks. David thought it would be interesting to compare the two and everybody could detect some difference. We then tasted Black Spanish (Lenoir) from a tank. This wine did not have much flavor since it was young and David estimated another two years may be needed.

The almost three hour class was finished and everybody agreed they had a great time. At the end of the class we were all able to take a Black Spanish vine home with us to plant. Watch out for my grapes growing in the future! The class was definitely worth taking and if we lived a little closer to New Braunfels, I would be attending the Winery U classes every month. I would highly recommend taking one or more classes.