Note: Lakeview Winery is now closed and reopened as KFire Winery and Vineyard

Lakeview Winery is located in Austin on the property of The Oasis near the famous restaurant overlooking Lake Travis. The winery opened in March 2012 and is owned by Kenny and Gail Fowler.

It has been a while since I have eaten at The Oasis restaurant and I did not recognize much when I first arrived. Kenny and Gail informed me that the restaurant had a fire in 2005 and after rebuilding, a little shopping center opened on the property with nice shops and eventually including their Lakeview Winery. 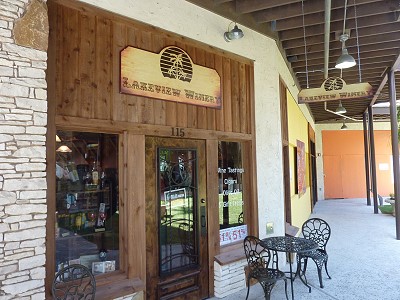 Kenny and Gail were very nice and welcomed me into the winery. A nice gift shop was on the right side including wine gifts, clothing, and olive oils from the Heart of Texas Olive Oil Company. Also present is a balsamic vinegar tasting bar and cigars.

I learned that Lakeview Winery has been making wine for the past two years and have wanted to open a location in central Texas. I do not think they could have picked a better location with people visiting The Oasis restaurant all the time.

Right now Lakeview Winery uses about 65% Texas grapes from Rockdale which is where their vineyard is located. They grow Cabernet Sauvignon, Lenoir, and Blanc du Bois grapes. Grapes from the High Plains are also used. Their goal is to get to using 100% Texas grapes. The rest of the grapes right now are from California and New Mexico. Dan Marek from Georgetown Winery is currently their winemaker and their wine is also made in Georgetown.

Lakeview Winery opened with wines of their own including Muscat, Sweet Red, Texas Peach, Merlot, Cabernet Sauvignon, and Chardonnay. They also sell wines from other Texas wineries such as Cervantes-Dotson, Georgetown Winery, and Salado Creek Winery. 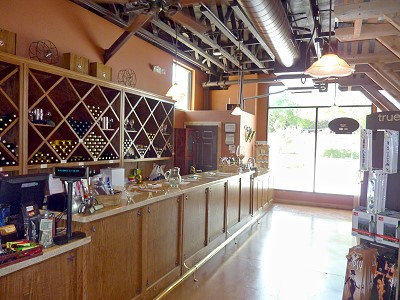 Tastings are done standing at their tasting bar which includes a tasting fee for five wines and the tasting glass is also included. The uncorked bottles are poured from the bottle for the tastings.

Lakeview Winery has a wine club which you can join. Kenny and Gail admitted they have not had a Grand Opening yet, but I think the winery looks great and they have made a great start to opening a winery which can do well. Next time you are at The Oasis in Austin, please stop by to try Lakeview Winery’s wines. 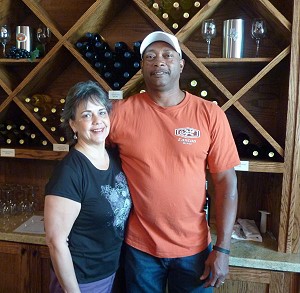