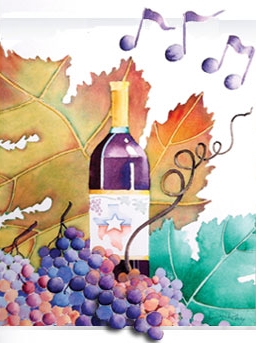 The 14th annual SpringFest was held in historic Old Town Spring on March 31st and April 1st. Like last year we volunteered to help the wineries pour their tastings. We were just hoping the weather was not going to be like last year when it was very cold the first of two days. When we volunteered, I was told the festival was moved to the end of March instead of the beginning like last year to hopefully avoid that problem. It looked like a great decision as the weather was beautiful all weekend.

We volunteered for the first shift which involved setting up too. When we arrived at the festival volunteer check-in, we were unsure which winery we would be helping. Earlier in the week, I had two wineries say they hoped we would pour for them. Check-in time came and we learned we would be helping Red 55 Winery. The winery is owned by Miranda Lambert’s parents and is located in Lindale, TX. If you are not aware, Miranda Lambert is a famous country singer who grew up in Tyler, TX.

Last year all the wine tasting was held in Preservation Park and this year it was moved out on the streets. This was a great idea to get people to roam Old Town Spring and visit the stores, but sometimes people needed to be directed to where other wine tasting locations were. There were two major locations, one smaller location in Gentry Park, and Wimberley Valley Winery did their tastings inside their tasting room located in Old Town Spring.

We found the street where Red 55 Winery was to be and only one winery was currently setting up at just past 9:00am. The festival was to start at 10:00am. Other wineries started showing up to set up their tables and fortunately some of them knew the tables designated for the specific wineries. When the two representatives from Red 55 Winery showed up, we started setting up the table.

Unfortunately they had forgotten some of their items in a truck in a nearby town, but like happens most of the time, other wineries help each other. Billy Cox from Retreat Hill Winery loaned a tablecloth to cover the table. A bucket was needed to hold the chilled wine on the table and I offered to go search for one. After trying unsuccessfully at a few stores, I asked the volunteer lead and she took me to Wimberley Valley Winery because she thought she had seen one there. We met Jana Valentine from Wimberley Valley Winery and she had exactly what they were looking for. I returned to the table with it and the table was set up and ready to go.

Well, it was ready to go but most tables were still waiting for the wine to be delivered. It was being delivered by truck at various times and I believe most wine was delivered by 10:30am. The good thing is most visitors to the wine festival had not started arriving yet, so it was not a big issue.

Tasters started arriving and soon everything was working in a nice groove. The representatives from Red 55 Winery were very knowledgeable about the three wines which they brought: Red 55, Kerosene, and Crazy Ex Girlfriend. They enjoyed talking to the tasters and telling them about the wines and the winery. At that point Gloria and I did not need to do much except for occasional errand runs.

The next shift’s volunteers showed up and we were released from our volunteer duties. We then got the chance to visit the other two wine tasting sections and taste some wine which we have not had before and also visit with some representatives we had previously met at other festivals.