In my last post in which I talked about Messina Hof Hill Country, I mentioned how VIP members at Messina Hof Winery and Resort in Bryan get the same VIP benefits in Fredericksburg. The full list of VIP benefits can be seen on Messina Hof’s website. Some of the benefits which we enjoy are the discounts, tour and tasting for 20 people, and private labels. One of the highlights is the quarterly VIP receptions where you get to don your winemaker’s red beret (did I mention you get a red beret too?) and enjoy two hours of drinking four Messina Hof wines, eating delicious appetizers, and mingling with other VIP members, not to mention the owners themselves. 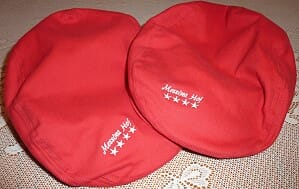 The first VIP reception of the year occurred today and was called the Birthday Bash VIP Reception to celebrate Paul V. and Paul M. Bonarrigo’s birthdays. Paul V. is turning 65 and his son Paul M. will be turning 30 in April. We checked in upon arriving and Paul V. along with Paul M. and his wife Karen greeted us at the check-in location. Messina Hof considers the VIP members part of their “family” and it is readily apparent whenever you visit Messina Hof. Paul V.’s wife Merrill was not at the check-in location at that time, but we met her soon as she greeted other members of the “family” to ensure they were doing well and making sure everything was okay. Also playing nearby was Paul M. and Karen’s daughter Sophia Marie.

The VIP receptions take place at different locations at the winery during the year and since it was a beautiful day like last year’s Birthday Bash, it was held outside in front of the winery. At the check-in we picked up our wine glasses and the first table we saw was pouring the George Bush Private Reserve Cabernet Sauvignon. As with most of Messina Hof’s wines, it was very good. The next wine was located at a nearby table and was the Rodeo Cuvee Port Special Reserve. Usually it’s recommended to save Ports to last but we decided to go for it and it was a great decision.

Later back by the pond we found Mike, an always fun and friendly employee, pouring the other two wines: Mama Rosa Rose and Merrill’s Vineyard Muscat Canelli. There were also cheese and fruit trays available there. Walking around were employees with other hot appetizers which were delicious. A live band was playing in front of the winery to entertain the guests. 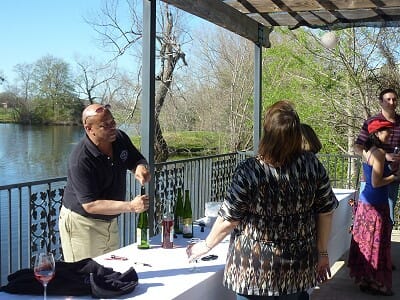 I had a moment to speak to Paul V. later and he confirmed what I heard. His lower end wines will be using Nomacorc synthetic corks to avoid cork taint, but the Paulo and other higher priced wines will continue to use natural corks. He also admitted he is now a Twitter addict. If you follow @Messina_Hof on Twitter and it ends in PVB, it came from Paul V. If it ends with MB, it came from Merrill. If Paul continues his new addiction, I wouldn’t be surprised we will soon see a Twitter account just for Paul.

Soon it was time for Paul V.’s greeting to all “family” members. The entire Bonarrigo family was there including his mother 90 years young of age standing in front of a large birthday cake. He told us how the Houston Livestock Show and Rodeo’s Champion Wine Auction and Dinner had just been held the day before and the top Texas wine of 2012, Messina Hof’s Solera, had a 9 liter bottle sell for $105,000 which is a record for a Texas wine. He said the previous record was $60,000. Paul mentioned how a couple had just been married at the winery yesterday by Paul (yes, he can legally marry people) and they had the most interesting vows he has ever heard.

Paul V. introduced the rest of his family and turned the microphone over to his son. Paul M. told us Sophia Marie was turning two this year and they are expecting their first son on July 18th. Of course true to tradition, his name will be Paul Bonarrigo.

Three raffles were done including a cooking class, an all-day harvest package, and a harvest grand finale ticket. We all then got to eat a slice of the large cake. Special cases of wine were available for purchasing which included some of each of the four wines being served.

Overall, it was another great time at a VIP reception. If you live somewhere near the Bryan area, the VIP receptions are a great way to meet other VIP members and enjoy some great benefits for being a Messina Hof wine lover. Join the VIP Club, wear your red beret, and meet us at the next one!