I scoured websites, local stores, and I believe I found all the Texas wine Orange Muscats, a total of ten wines. The next step was to acquire all of them. I made additional road trips to Fredericksburg to pick up some bottles and was able to get others at local stores. We had planned to do the blind taste test at the beginning of January but unfortunate circumstances arose which delayed the test. Cap*Rock Winery announced at the end of December they were bottling their Orange Muscat and I tried to order a bottle, but it would not be available for shipping until the middle of January. They offered to send me a bottle without the foil capsule, and even though I tried to pay they would not accept it. So out of the eight Texas wines I did end up getting for the blind taste test, we paid for every bottle except one.

I did say earlier I had found ten wines so there were two bottles I was unable to get. LightCatcher Winery has a 2005 Orange Muscat for sale but they are selling it for $100 a bottle. To make sure the price on the website was correct, I emailed them and received a reply from Caris Turpen, co-owner and winemaker. She said, “My Orange Muscat is indeed only available through the winery or our online store. It is very unusual, being bone dry. It has been blind tasted against some of the best Alsatian dry Orange Muscats and won the tasting. I have only a case left, hence the price, and vineyard issues made the 2005 the last one I did.” I appreciated the reply from Caris Turpen but $100 was out of my budget considering how much I had already spent for the other bottles of wine. 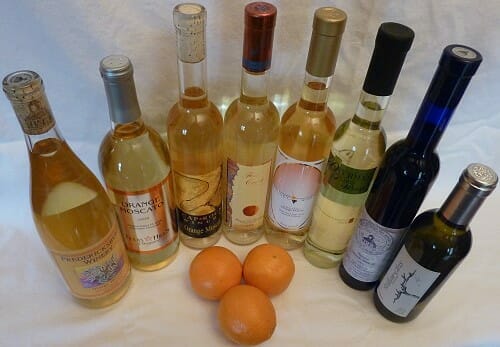 Driftwood Estate Winery also made a 2010 Orange Muscat but they had just sold all of it when I contacted them. So the eight Orange Muscats I collected were (in alphabetical order):

“We have been growing Orange Muscat since 1990. It is one of our harder varietals to grow but it is too popular not to. Fredericksburg Winery did the first, followed later by Cap*Rock, Flat Creek, Sunset, LightCatcher, and Texas Hills. It may have been the first vineyard designated wine in Texas at Fredericksburg Winery. It is usually a late harvest grape and rain at harvest is a disaster. It must be harvested within 24 hours to maintain the current Brix level as sugar (Brix) will not come back later. Through Fredericksburg Winery, we received our first international award and there have been many more international and domestic awards since.”

Next came time to plan for the blind taste test. We have never participated in one, let alone hold one, so I did a little research as to the best way to do one including how to rate each wine. I had taken a wine critic class where I learned the Robert Parker grading system but decided that would take too much time to explain to our guests. I listen to a wine podcast called Vino101 and asked their opinion since they mentioned in an episode they held a blind taste test. They suggested using a system called Net Promoter Score. I decided to use a variation of this system which involved two simple questions:

2.  On a scale of 1 to 10 (10 being you’ll actively recruit people to drink the wine) would you recommend this wine to a friend?

We invited friends who lived nearby and enjoyed sweet white wines, and there were a total of eight people. Most of the tasters were normal wine drinkers like us, but we did have one experienced taster and judge included, Russ Kane (http://www.vintagetexas.com).

A few hours before the tasting, our friends Carol and Mike asked if they could bring a non-Texas Orange Muscat. Of course was our answer. After some discussion and learning it was a California wine, we decided to put it in the blind taste test as a “ringer” to see how the Texas wines fared. Only the four of us knew this wine was among the wines to be tasted, and we now had nine wines. 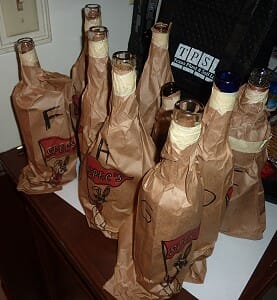 Wine crackers and water were available to cleanse palates during the tasting. Since some of the bottles were very small, we tried to limit the wine poured to one ounce so everybody got a chance to taste. Without anybody looking, I put the wine in brown bags and taped up the neck of the bottles. Gloria then labeled the bottles from A-I without me looking so both of us could participate in the blind taste test. 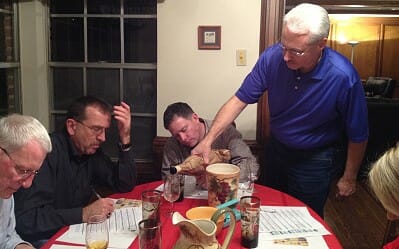 All our tasters arrived and we sat down to begin the blind taste test. Everybody was instructed how the scoring would occur. Besides the two questions, an area was given to write down any tasting notes. It was suggested that discussion of the wines not be done to discourage possible influencing of other people’s scores. 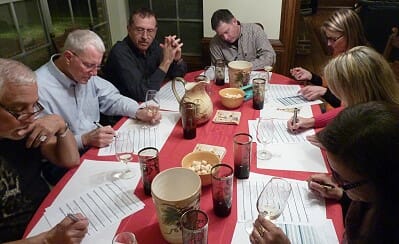 Off we began with the tasting of the nine wines. People were getting serious taking notes, swirling, smelling, and sipping. It almost felt like taking a school exam but everybody was having fun. After the tasting of the nine wines, Russ told everybody he had brought a French Muscat wine, not Orange Muscat, which was a 2003 Muscat de Beaumes de Venise. This was a 15% alcohol wine in a 750 ml bottle. We all decided to see how that tasted using our scoring system. This last wine was not to be compared because it was a different grape, but we did a score and notes on that wine too.

Don’t you really dislike when you watch a television show and it ends with “To be continued?” Sorry, but this post is getting long, so stay tuned to this blog for Part 2 and the results of the Texas wine Orange Muscat blind taste test.