In the first part of the Battle of the Texas wine Orange Muscats blind taste test, I described how we held our blind taste test and the wines which were included. Now it’s time for the results!

As a reminder, we had eight Texas wine Orange Muscats and as a test, we included a California Orange Muscat too just to see what people would prefer. I didn’t specify the California wine before so it was a Quady Winery 2010 Electra Orange Muscat. It has won various gold and silver medals so it is well liked out in the public.

We finished rating the ten wines including the French Muscat which Russ Kane brought so it was time to add up our scores and see what the group’s top favorite wines were. One of the people in the group volunteered to be our scorer and we gave our scores for each wine to him. He produced a total score for each wine. We could have divided the total by the eight people participating but it would have produced the same result to determine the order of ranking. It was mentioned in other similar tests, the high score and low score are thrown out and the middle scores averaged. I crunched the numbers by doing that method later and the results were the same except for the two wines ranked at the bottom.

Now with the tasting done, conversation ensued. The one thing people were amazed about was even though all the wines were made from the Orange Muscat grape, they all looked and tasted differently. Explanations can be made to this because of different vineyards and vintages. Even with wines from the same vineyard, the difference can come from the winemaker. It shows again the variety of wines made and how some people prefer one wine over another. 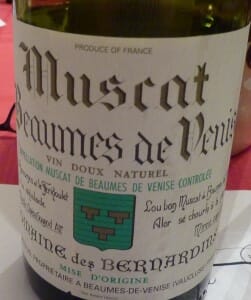 We discussed the French wine made from Muscat grapes and the first comment made, which most people agreed with, was it tasted more like alcohol with a whiskey-type flavor with a darker color. This brought the first comment from someone where they said they did not like the wine but they would recommend it to other people who would like the whiskey-type flavor. Others agreed there were circumstances which could occur where they did not like the wine but they would still recommend it. Perhaps in the future we should re-word the second question asked of people, since in this one case the person did not like the wine but they gave it a 10 because they would recommend it to a friend. Looking through the tasting sheets, this was the only wine which really gave a high score with a “No”, so that did not influence the rankings for the rest of the wines.

It was time for the unveiling of the wines to see which ones we had rated and provided tasting notes for. During the tasting, three of us who have had the Duchman Family Winery Orange Muscat before knew “for sure” when we tasted it. We were shocked when the bottles were unveiled and the one we thought was the Duchman wine turned out to be another one. This shows either we really don’t have a good memory or a blind tasting really does eliminate any preconceived notions.

Note: Before I give the results, please realize this is a sampling from eight people, obviously a much smaller percentage than the rest of the wine drinkers out there.

I will only give the top three ranked wines but since we put the California Orange Muscat in the blind taste test, let me tell you how that did. I was a little concerned when adding the wine since in some people’s minds, California makes the best domestic wine and Texas makes horrible wine. Since I just told you I was going to tell you the top three ranked wines, that shows the California wine did not make the top three. In fact it was dead last! It was unanimous when tasting this wine it was not preferred, and all scores except for one ranked it from 0-2. 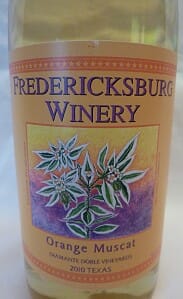 Duchman Family Winery’s notes are: Our first ever true dessert wine is exemplified by the 2009 Duchman Family Winery Orange Muscat. A full bodied sweet white wine, the 2009 Orange Muscat shows intense aromatics of baked peach and blood orange that jump out of the glass. With a honey like quality, this wine coats the palate with a delicious flavor profile of baked citrus fruits, stone fruits and sweet flowers. Rich and layered in character this wine is the perfect pairing with rich desserts or in some cases as dessert on its own.

Cap*Rock Winery’s notes are: The orange in this Orange Muscat is immediately apparent on the nose and on the palate. The balance between the sweetness and the acidity makes this one of our best loved wines. Try this with soft cheeses, creamy desserts, or for a decadent delight, pair this with chocolate.

To no surprise, Cap*Rock Winery’s notes were correct in that it was one of the best loved wines. The Duchman Family Winery’s Orange Muscat was not far behind in second place and the good thing is both of these wines should be readily available for you to buy.

The blind taste test was a lot of work, but also a lot of fun! Some of us who did it agreed it was a great time, and perhaps you may read about other tests in the future.