Update: The winery is now closed.

Junction Rivers Winery opened in November 2011 and is owned by Joe King and Jeanie Brosius. When we arrived, we were greeted by Joe who led us to a table to do a tasting. We learned both Joe and Jeanie do everything at the winery including the winemaking. 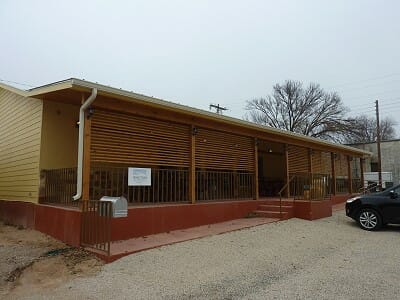 There is a tasting fee for the four wines they currently make. The tastings are poured from the bottle and water is served during tasting.

Don Pullum, winemaker at Sandstone Cellars Winery, has helped Junction Rivers Winery with their initial wines which were made at Torre di Pietra Winery. For their first wines, the wines are the same as Torre di Pietra but with a different label. The four wines are a Lenoir, Malbec, Blanc du Bois, and Petite Sirah. They sell more Blanc du Bois because people tend to like sweeter wines. The Lenoir from Torre di Pietra won a bronze in the International Women’s Wine Competition in 2011 for Torre di Pietra. All of these wines are made with 100% Texas grapes using grapes from the Fredericksburg area.

Junction Rivers Winery is in the process of making their next wines in their winery and Don Pullum believes they have a couple wines including a Cabernet Franc which is going to be great. This year they produced 500 cases of wine and they think they can do 1,200-1,500 cases a year. 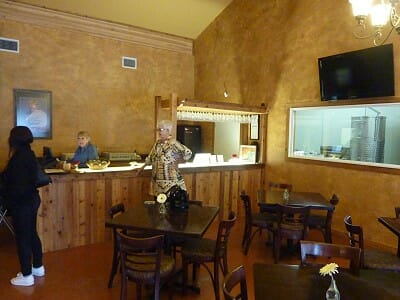 You can buy food while enjoying the wine. They have nice meat and cheese trays and also have some off menu items. One item which was not on the menu was a flatbread pizza. We heard a previous customer talking about it and since it was lunch time, we chose the flatbread pizza. Jeanie took our food order and we learned her son is the chef who she brought out later to meet us. During the tasting, the pizza arrived and it was magnificent!

While we tasted, Joe sat down and talked about the philosophy of the winery. He said, “It was a concept to fulfill a passion. It wasn’t about money, it wasn’t about anything. We felt we could make a difference in the world, not change the world, but we could change our little footprint. So when we built this building it’s a totally energy efficient building. It will have water collection, solar panels, and wind generators. We’re developing this concept of a walkable community so we’re rebuilding an old building right downtown to live in two blocks away, and this is a concept to revitalize downtown Junction. So we put it here in order to enhance the concept.”

He continued to explain the wine labels which represent everything Junction represents. The wine label has two rivers which come together like in Junction one block away from the winery, hence the name Junction Rivers Winery. There are hills representing the Hill Country and then buzzards. We asked about the buzzards and Joe said, “Somebody said, ‘They look like eagles to me.’ I said, ‘They’re eagles.'”

As you can see, Joe is a fun guy to talk to, not to mention being very informative. He also explained how all their wine bottles use screw caps which is consistent with what they are trying to do and environmentally was the right thing.

We learned that Joe King is really Dr. Joe King. Joe and Jeanie also own the adjacent King Care Pet Center in addition to the winery. Joe is a man of many talents as he is a veterinarian, dog trainer, environmental scientist, and entrepreneur.

The winery is in the process of building a dog park behind the winery with closed caption TV which they will call Yappy Park. This will let people bring their dogs to play in the kennel or dog park while they enjoy drinking wine and watching their dogs on the winery’s big screen TV. The guests also have the option of boarding their dogs at the clinic. Jeanie showed us bandanas which say “Yappy Hour at Junction Rivers Winery.”

Tours are available and Joe gave us a tour of the production facility which is visible through a large window from the tasting room. In the room were the stainless steel tanks and oak barrels. We were able to sample a couple wines from the tanks including the Cabernet Franc which they are excited about.

There is a nice gift shop with candles, clothing, gift baskets, and other items. Free Internet Wi-Fi is available at the winery which you can use while enjoying the Texas wine.