There has been confusion regarding what the correct name of the winery is. I have seen Santa Maria Cellars (on their website and even wine bottle labels), SantaMaria Cellars, and when we arrived at the winery there was a banner with Santamaria Cellars. 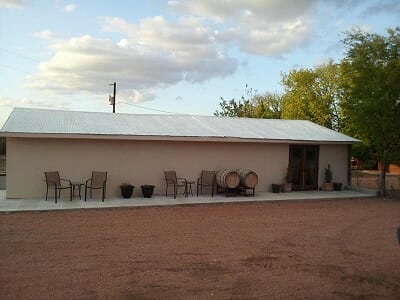 Angela Santamaria was at the winery and we got the answer to the winery’s name. The name should be Santamaria Cellars but the labels had been produced incorrectly, website done incorrectly, etc. but their goal is to eventually get it all clarified. Martin Santamaria was not at the winery because he was in downtown Fredericksburg at Texas Wine Cellars, a store specializing in Texas wine, and he was giving tastings and autographing bottles.

Tastings at the winery are done while standing at the tasting bar. There is a tasting fee for whatever wines they have available and there were 8 wines available when we were there. If you buy two bottles, the tasting is free. The bottles are corked and the tastings are poured from the bottle. 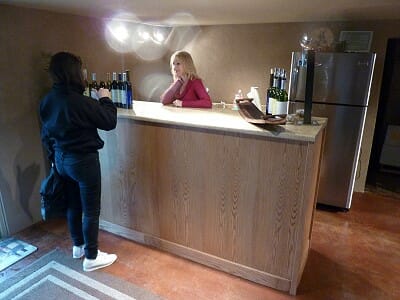 During our tasting, Angela told us a little history and future of the winery, Martin’s history on how he was going to move to California but stayed instead in Texas, and how she was a good customer of Martin’s wines before the winery opened which is how they first met.

All of Santamaria Cellars’ wines use 100% Texas grapes from the Hill Country and Lubbock area. Santamaria Cellars uses Chilean oak barrels for their Texas wine. There is a small gift shop present with wine accessories and the winery has a wine club.

We had a great tasting with Angela and we thought it would be fun to meet Martin in downtown Fredericksburg. Angela said she was also going to be meeting him there shortly. After a stop at another winery, we found Texas Wine Cellars in Fredericksburg and Angela was already there along with Martin who we then met. We had a nice conversation, tasted a little more, and bought a bottle of their wine which Martin autographed. 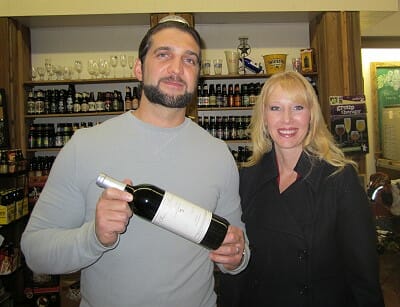 Santamaria Cellars is a new addition to the Texas Hill Country Wine Trail and we recommend you stop by to see them when you are in the Fredericksburg area.