Day 2 arrived in Fredericksburg and the weather was rainy and a little cold. The weather couldn’t decide what to do while we were there. One morning it was near 70 and the next it would be in the 40’s and rain in between. I had previously made an appointment with Don Pullum (@akashicvineyard), winemaker at Sandstone Cellars Winery, to visit first thing they opened on Friday so we started our northern trip to Mason, TX. We had only “talked” through Twitter so I was looking forward to meeting Don in person.

Gloria has never really cared for any Viognier wines or even blends which contained Viognier. I have even tried hiding the fact a wine had Viognier and she has been able to pick out even 10% of the grape present in a blend. We have not tried a red wine with Viognier in it which I learned is sometimes used to soften a wine predominantly made with Syrah. I was unaware of red wines with Viognier so I was sure Gloria didn’t know either. Noticing that the Sandstone Cellars 2010 XI was made with 5% Viognier, I told Don in advance not to mention that fact. 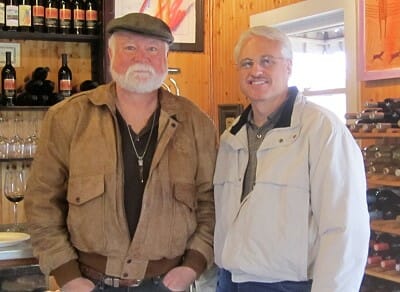 We arrived at the winery and met Don who was ready for us to begin a tasting. Don had lined up the bottles for us to taste in a particular order and I noticed the XI was near the end. He explained in detail about each wine as we all swirled, sniffed, and sipped. We learned a lot from Don about the wines and the history of Sandstone Cellars and Mason County.

When we got to the XI, I was hoping Don remembered not to say anything about the Viognier and true to his professionalism, he skipped over that fact. While we tasted the XI, Don was talking and we were looking at each other. Out of the corner of my eye, I could see Gloria for the first time bend down to look at the bottle which detailed the grapes used in the wine. We both chuckled because we knew what she was looking for. Sure enough, she admitted it tasted different and she somehow picked out the 5% Viognier in the red wine. Don was even impressed. There must be something with that grape that affects her taste buds.

During the tasting we met and talked with co-owner Scott Haupert, who we had previously met last year when we visited Sandstone Cellars Winery. We had a great visit and it was a pleasure to meet and talk with Don and Scott. After buying a few bottles, we asked for an empty box too as our trunk was starting to get full and there’s nothing worse than bottles bouncing around and especially breaking. Our next stop was going to be Junction Rivers Winery and since Don helped them with their initial wines, he gave us directions and we bid a fond farewell.

We found Junction Rivers Winery in Junction, TX and after walking in we were greeted by Joe King and Jeanie Brosius. They are a very pleasant couple and we immediately felt welcome. Joe handled our tasting while Jeanie finished helping another customer. They were talking about the flatbread pizza which had just been eaten and Jeanie asked if we had lunch yet. We had not and had planned on finding a place to eat after visiting Junction Rivers Winery. Jeanie provided a menu of food choices and there were a couple items which were not on the menu, including the flatbread pizza. We thought that sounded good so we ordered some while we did our tasting. 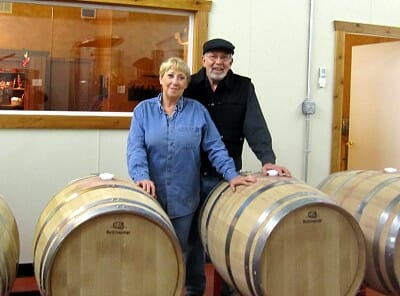 Since the winery had recently opened, Joe explained about the winery and their philosophy, both with the future of the winery and helping the town of Junction. We enjoyed the four Texas wines they currently have and our pizza arrived. What a great choice! The flatbread pizza was definitely some of the best we have had. After complementing them on the pizza, Jeanie said her son was the chef who prepared it and she brought him from the kitchen so we could meet him. Joe gave us a tour of the production facility which is visible from the tasting room and we were able to sample two wines from the stainless steel tanks. He said Don Pullum thinks the Cab Franc they are making and which we tasted is going to be a hit. We had a great visit at Junction Rivers Winery and headed to our next new winery which was Kerrville Hills Winery.

By the time we arrived at Kerrville Hills Winery, it was raining pretty steadily but that didn’t deter us. We were the only visitors initially in the winery and we tried their three wines. Brenda, the tasting room manager, gave us a tour of the production facility and they have an amazing facility which rivals larger wineries. For having only three current wines, they have plenty of room to grow and the winery should do very well especially now that they are on the Texas Hill Country Wine Trail.

Co-owner Angela Santamaria met us at the winery and we got the answer to the mystery. The winery’s name should be Santamaria Cellars but labels had been produced incorrectly, website done incorrectly, etc. but their goal was to eventually get it all clarified. Martin Santamaria, Angela’s husband and the winemaker, was not at the winery because he was in downtown Fredericksburg at a store giving tastings and autographing bottles. We thought it would be fun to meet Martin (pronounced Marteen) since he was from Mendoza, Argentina and Gloria is also from South America. After tasting their very good wines, Angela said she was going to be meeting him at the store and we said we would probably be stopping by too after one more winery visit.

We went to Chisholm Trail Winery which we visited last year. We had met a couple at the Old Town Spring Autumn Art & Texas Wine Festival who were pouring wine for Chisholm Trail Winery. They said we needed to come back since they had changed the interior and put in a pizza oven earlier this year. We dried off from the still drizzling rain and shared a tasting at the winery. We had previously enjoyed Chisholm Trail’s wines and this time was no exception. Before we left we visited the pizza oven and the cook who showed it was a wood burning pizza oven with coals or wood always burning in the oven. Next time we visit, we’ll have to be hungry so we can try the pizza.

We then went to Fredericksburg to find the store where Martin Santamaria was doing tastings. We found the store which had been redesigned from the last time we were there. Angela Santamaria was already there along with Martin who we then met. We had a nice conversation, tasted a little more, and bought a bottle of their wine so Martin could autograph it. That’s when it occurred to us we should have been doing that all along whenever we met a winemaker or owner. We would solve that situation soon. 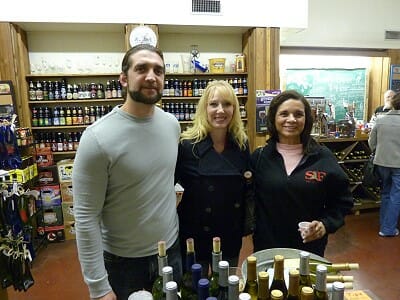 Martin and Angela Santamaria with Gloria

After saying goodbye, the Lighted Christmas Parade was about to start on Main Street. A large crowd was looking forward to this parade which begins the German holiday weekend. We watched some of the parade while it was sprinkling and then went to eat at the Auslander German restaurant where we finished the day.