Last year we went to Hill Country and Fredericksburg wineries three times. Unfortunately this was before we decided to start a blog and so we had no specific information about the wineries other than our memories. We started taking photos of the outside of a winery in the last trip just to help us remember what the winery looked like which we visited. But for some unknown reason, the photos taken with two cameras disappeared. So it was time to make our first trip back west this year and visit some wineries we had previously visited and also the many wineries which had opened up since last year.

We planned a four day trip so we didn’t have to rush. Thursday was day 1 and I was given the task of planning the trip. I decided we would visit some wineries on the eastern side of the Texas Hill Country Wine Trail and then work our way to Fredericksburg. Unfortunately not all wineries are open on Thursdays which meant we could not visit some of the wineries we were hoping to visit. We learned one thing on this trip though; visit on a weekday to a winery and most likely you’ll have the place to yourself or only a few people there, which leaves lots of time to talk to the people at the winery.

The plan came through nicely and we first visited Spicewood Vineyards soon after they opened. The last couple times we visited Spicewood was on a weekend and the tasting bars were always full. This time at Spicewood Vineyards we had the place to ourselves and enjoyed their Texas wines. Unfortunately tours are only given when the winemaker is there (call ahead) but we were able to sneak a peek at the underground barrel cellar directly below the tasting room. 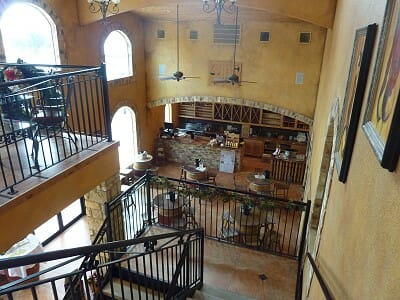 Next up was Flat Creek Estate which we decided in our first TX Wine Lover Awards had the best tasting room. We weren’t disappointed this time either, although some other wineries may be in contention for our next awards. We did a tasting and I mentioned how I had previously tried to find out if tours were available for just two people. We learned the tours are available only for groups of 8 or more. Luckily since it was quiet and Tim Drake, winemaker, was handling the cold fermentation, we got a short impromptu tour which was nice. We then met co-owner Madelyn Naber who arrived to decorate the Christmas tree in time for the wine trail holiday ornament pickups. We had a nice chat with her and Amanda, our tasting guide and Flat Creek Estate event coordinator.

We decided the next winery was going to be Bell Springs Winery which we had also visited last year. At our last visit, a bachelorette party arrived just before us so the winery was crowded and we did not get to really relax. This time, again being a Thursday, it was just us enjoying Bell Spring’s wine. 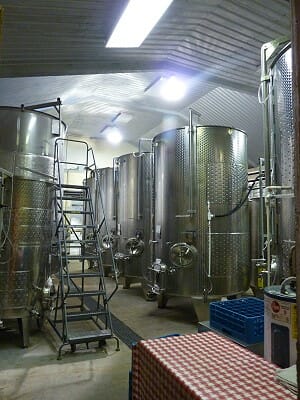 It was getting close to closing time for most of the eastern wineries and so we had to visit Texas Hills Vineyard next before they closed. We met co-owner Gary Gilstrap at the Texas Hill Country Wine Trail’s roadshow in Houston and he said next time we were at the winery just ask for a tour. We arrived to do a tasting and briefly met Gary’s wife Kathy. During our tasting we asked about a tour. They checked with Gary, who happened to be upstairs, and he came down to give us a very interesting tour. They do not use oak barrels at all but control everything in their stainless steel tanks with micro-oxidation, oak chips, and everything is computer controlled. Definitely a modern operation. I heard earlier in the week how Jim Johnson from Alamosa Wine Cellars was going to do some bottling with a mobile bottling unit which comes to their winery and helps them bottle their Texas wines. We learned Gary owns that unit and helps over 20 Texas wineries do their bottling. After leaving, we realized we had forgotten to take a photo of Gary during the tour. We’ll have to remedy that next time we visit.

I previously contacted co-owner Chris Brundrett from William Chris Vineyards about visiting them on Saturday, but since they were open a little later on Thursday and are not that far from Texas Hills Vineyard, we decided to stop and hope Chris was there. The winery was doing their Christmas decorating and we were fortunate Chris was present and we got to meet him. He is a fun guy and we had a great conversation with him and the other employees. We were then lucky to get a taste of their upcoming Blanc du Bois which they will be bottling this week. It was definitely one of the best Blanc du Bois Texas wines we have had.

We said goodbye to Chris and the others and headed toward Fredericksburg. On Saturday we were going to visit some of the wineries along Highway 290. After leaving William Chris Vineyards, we once again realized we had forgotten to take a photo of Chris and would stop again on Saturday to hopefully get a photo. We need to get better at this.

Since the newly opened Messina Hof Hill Country was open until 7:00pm, we decided to stop in to hopefully reduce the quantity of wineries we wanted to visit on Saturday. It was already dark (I really don’t like daylight savings time) but Messina Hof Hill Country looked great lit up at night. As previously mentioned months ago, we have been to Messina Hof Winery & Resort many times as we are VIP members and have tasted most of their many Texas wines, so we were not sure what we would be tasting differently. The one wine I definitely wanted to taste again though was their 2004 Solera which was just declared the best Texas wine at the recently held Houston Rodeo’s International Wine Competition. The Sherry did not disappoint us at all. Unfortunately the price had risen with the menu even having a crossed off price and hand-written new price. I don’t blame them though as I am sure many people were coming in to try the best Texas wine. We did learn that Messina Hof Hill Country only serves 100% Texas wine so that was nice to learn. There are also some special wines made specifically for Messina Hof Hill Country which you can’t get in Bryan at the main winery location. It was too dark to really tour the villas so we thought about doing that next time. 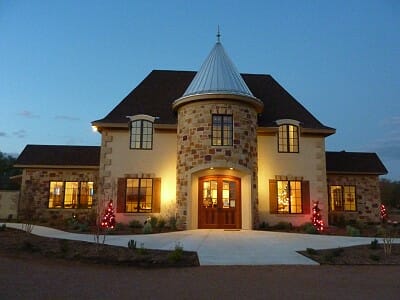 We checked into our hotel, no bed and breakfast on this trip, and ended the long day with a relaxing dinner at the famed Cabernet Grill.