Our final day in the Hill Country arrived and we woke up to pouring rain and cold weather. The initial plan was to visit Garrison Brothers Distillery, the first and oldest legal distillery in Texas, on the way back home, but since we started taking photos of owners and winemakers in addition to getting autographs on wine bottles, we decided to head back to Sandstone Cellars Winery instead. 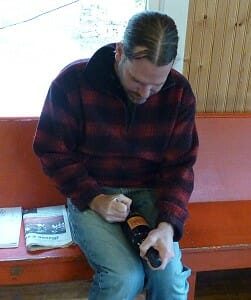 We arrived right after they opened and Scott Haupert was there, like he has been every time we have visited. When we asked if he could sign a wine bottle, he said he never has done that before. He, the other owner Manny Silerio, and winemaker Don Pullum usually sign books. In the past only Don and Bill Worrell, the artist for their bottle labels, have signed wine bottles. So Scott took the little tool they have set aside (actually a modified nail) and engraved his name in the wine bottle’s label for the very first time.

We were hoping to get Don’s signature too and Scott said he should be there shortly. Next door to Sandstone Cellars Winery is another family operation Santos Taqueria (http://www.santostaqueria.com). This was an old gas station which has been converted to a restaurant. This is not your typical Tex-Mex restaurant because the food is made the Old World way. The reason for this is because Manny’s mother, Santos Silerio, originally from Durango, Mexico, actually runs the restaurant using her recipes.

Two days prior when we were at Sandstone Cellars Winery, I tweeted on Twitter we were there and one of my Twitter friends @Friscokid49 asked if we had eaten at the restaurant because it was one of his top 5 real Mexican restaurants. We could either head home or since it was near lunch time, take his advice to eat lunch and wait for Don to arrive. We chose the food which was a wise decision. 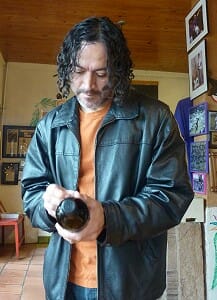 We picked up menus and decided we would try shrimp gorditas. Gloria placed the order and we learned it was Manny’s sister who was taking our order. You can also see the food being made right there with Manny’s mother leading the way. Gloria asked if Manny was around. She was told he was and they would give him a call. Our food arrived and a short time later in walked Manny Silerio with engraving tool in hand. He had gotten the word from Scott we were looking for an autograph on the wine bottle. He said we made a good choice on the shrimp gorditas and we thanked him for braving the rain to come autograph our bottle.

After our delicious meal (you really need to eat at Santos Taqueria if you’re in Mason) we walked back to the winery. Don arrived shortly and autographed the bottle too. He had seen on Twitter previously where we were asked about eating at the restaurant and was glad we had gotten a chance. We said one last goodbye and started our trip back home.

However instead of going directly home, we had to stop and visit the recently opened Westcave Cellars Winery first. We found the winery and it was surrounded by vineyards. It must look beautiful when they are green. Walking into the tasting room we were greeted by owners Allan and Margaret Fetty in addition to another couple enjoying the Texas wine. Margaret started a tasting for us while we enjoyed a nice conversation with both couples. 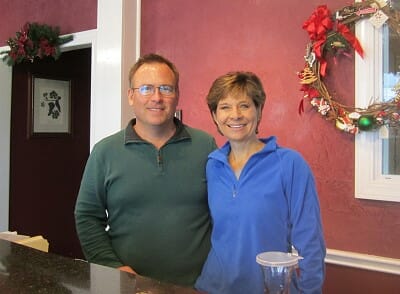 Allan is the winemaker and Westcave Cellars usually only gives reserved tours for six people or more. Since the winery was not busy, Allan graciously gave us a tour of the production facilities behind the tasting room. He admitted there isn’t much room for all the equipment and it has to be moved around during different stages. However Westcave Cellars is still able to put out a decent quantity of cases during the year. Allan continued to talk to me after the tour while Gloria went back to the tasting bar. Later we discovered all of them at the bar having fun and of course drinking more wine. We had to say goodbye, but we will be back to Westcave Cellars Winery sometime in the future.

On the drive home we reminisced about our four day trip. Even though the days were mostly long, we had such a fun time meeting new people, visiting new wineries, and re-visiting favorite wineries. We will definitely be making a trip back to the Hill Country and Fredericksburg again in the future.