Saturday came and it was one of the days I was looking forward to. We were going to take a break from visiting wineries and go to a reenactment of World War II Marines combating in the Pacific. If you have any interest in military history, the National Museum of the Pacific War in Fredericksburg is a must see (http://www.pacificwarmuseum.org). The museum is dedicated to the memory of the Pacific Theater of WWII and every time I have visited, it has gotten bigger and better. My father served on a Destroyer Escort in WWII and after I wrote a book and eBook about his ship (http://www.ussholt.com), I was interested in the museum even more. I had never seen the reenactment so I could not wait to see it and I definitely was not disappointed. The final minutes of the demonstration including gunfire, explosions, tanks, and what I was waiting to see flame throwers, made the visit well worth it. The reenactment and words from the participants definitely left you with a feeling of being proud you live in a country with freedom. I would highly recommend taking time away from visiting wineries to spend some time at the museum. 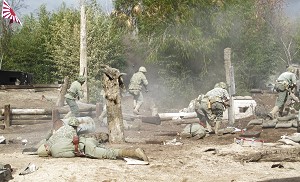 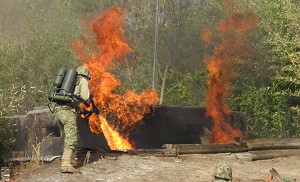 After the museum we decided to get back on the winery trail and visit Bell Mountain Vineyards. We had previously visited the Bell Mountain Tasting Room on Main Street and also Das Peach Haus which sells their Oberhof wines. We were unclear as to the difference between the wines so we wanted to understand this better when we arrived at the winery. Co-owner Evelyn Oberhelman met us in the tasting room and explained the Bell Mountain Texas wine was Estate bottled and the Oberhof Wines were sometimes blends and included non-Estate fruit. The winery also makes Vina Rita Wine Cocktails which is an interesting concept. For those bars which do not have a liquor license but can serve beer and wine, the Vina Rita Wine Cocktails come in flavors such as Margarita and Pina Colada. Mrs. Oberhelman also gave us a very interesting tour of the winery.

Next up was visiting some wineries on Highway 290. We started at Grape Creek Vineyards because I wanted to take their trolley tour of the facilities. We had missed the tour in the past so I wanted to ensure we saw it this time. For $20 a person you get a trolley ride to the production building which was recently built replacing the old building which stands next door and is now used as a barrel room. Kim gave us an interesting tour and we were able to sample the same wine out of three types of barrels to give us an indication how a barrel can affect the taste of wine. We were able to keep the glass we used to do the tasting. Grape Creek has one of the few underground wine cellars in the area, but I forgot to ask why we didn’t get to see it. Overall the tour was very informative, but personally I think the price is a little high for a tour and glass.

I had prearranged for us to get a sneak preview Saturday afternoon of Hilmy Cellars which will be opening early next year, but I could not reach Erik Hilmy on the phone, so it was on to plan B.

I wanted to buy a bottle of Messina Hof wine for the upcoming Twitter Tuesday so we went back to Messina Hof Hill Country to get the bottle and see the winery in the daylight.

Gloria struck up a conversation with a man and eventually asked him if he worked there. He said yes, because he was the owner, Nitzan Mendelbaum. We talked a little bit including the involvement of winemaker and owner Dan Gatlin from Inwood Estates Vineyards. I mentioned how last time we were at Inwood Estates Vineyards at the Vineyard at Florence we had just missed him. Nitzan asked if we would like to meet him, and surprisingly we were introduced to Dan Gatlin working behind the tasting bar. Dan handled a tasting for us and we decided to try just the Mendelbaum Cellars Texas wine. 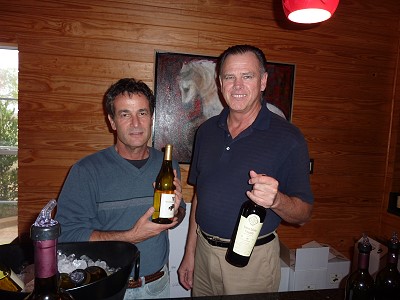 Dan explained how the fruit used in Mendelbaum’s wines is whatever Dan has extra from his winemaking and also includes other Texas fruit. The white wines are made at the Florence location and the red wines are made at the Dallas location. Overall we had an interesting conversation with Dan during the tasting. We also learned that Mendelbaum Cellars does not yet have the wines from Israel in, but they have tasted them and they think they are great.

Just up the road after Mendelbaum Cellars is the future location of 4.0 Cellars. If you have not heard, 4.0 Cellars is a collaboration of McPherson Cellars, Lone Oak Winery, and Brennan Vineyards. I was asked by Todd Webster (@txviognier), winemaker at Brennan Vineyards, how 4.0 Cellars looked, so I took a photo for him and shared it on Twitter. The winery will be opening early next year. 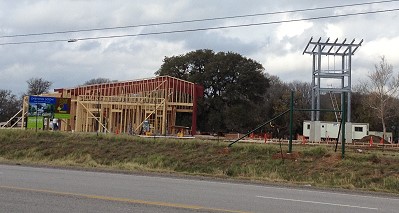 We stopped in at Becker Vineyards since I had previously seen they were giving free tastings of their Port and also doing Port shots. In addition, they had just won a number of medals at the Houston Rodeo’s International Wine Competition and I wanted to try those wines. The winery was full as it is most times we have visited but Randy, the person who was giving the Port shots, said he could help me with a tasting. Unfortunately he told us the Beckers had just left otherwise we could have met them. The Texas wine was of course very good and the Port shot was a nice finish. I thought it was going to be just a shot of Port wine but in fact it was a little cup with the side dipped in caramel, Port poured in the cup, and you are supposed to lick the caramel and do the shot of the Port. We need to remember this for a future party!

Next we made it back to William Chris Vineyards to hopefully get a photo of Chris Brundrett and since we had now thought of it, an autograph on the wine we had purchased. When we pulled up we saw Chris standing at the door to their event center set up with dinner tables, so we went to see him. He started walking to the tasting room with a couple other people, saw us and said hello. He said I had something in common with one of the other people and introduced me to @wowaustin who I follow on Twitter and has a great blog. We talked a little bit about blogging and then we all drank some wine with Chris. Gloria was able to get the photo of Chris and then in walked the other owner William “Bill” Blackmon. We were lucky they were having a dinner event that night as we were able to get a photo of both owners and both autographs on a wine bottle. 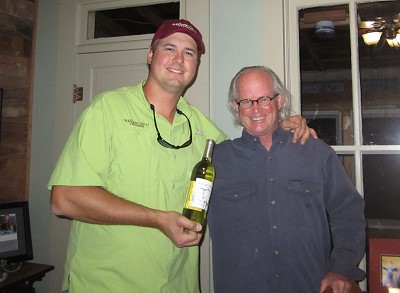 It was already dark outside by now and luckily Woodrose Winery stays open a little later than the other wineries on 290, so we headed that way. We made the drive down their dark driveway which we have done more than once. Last time we were at Woodrose Winery, we did a tasting on the back deck of their tasting room. The tasting room was closed this time and a big building next door, the event center, was where everybody could be found. We learned they open up the event center when there is bad weather or large crowds. We had a great tasting and had the pleasure of meeting owner and winemaker Mike Guilette.

It had been a long, but very fun day.