Update: The winery has closed in Navasota and is now in the Hill Country as Hahne Estates Winery.

White House Winery is located in White Hall near Navasota and is owned by Gary and Margo Hahne. The winery was planning on opening around the Conroe area but there were so many rules and regulations within the city limits that it was decided to find property in the country and deal with the less taxing county rules. They found a nice piece of property on FM 362, very near Retreat Hill Winery and Vineyard, and started building their winery.

When I first found out about the winery, I kept waiting for the notice they were open so we could visit. The winery was hoping to open earlier in 2011 but officially opened on August 27, 2011. The winery later asked for volunteers to help them bottle their Riesling and we offered our services. It was a perfect combination to visit, do some tasting, and also help bottle some Texas wine. 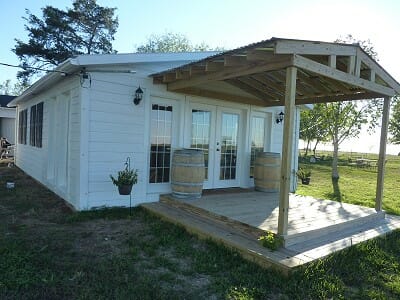 We met John Martinez, Director of Sales, and he offered us a bottle of wine to take outside and drink while we waited for the other volunteers to arrive. There are some nice tables and chairs outside where we sat to drink our first taste of White House Winery wine, which was a Chardonnay.

While we were enjoying the wine, a music stage was being built nearby so it could be on time for the winery’s first series of concerts which was started on Sunday, November 6th. Other volunteers came and after a nice conversation with them, we headed into the tasting room to help with the bottling. There we met Gary Hahne who was already in the process of filling the bottles with Riesling.

We all took turns at the various stations and began to help: cleaning bottles, corking, labels, and foil. While helping, I learned more about the winery from Gary. The reason for the delay in opening the winery was a common problem among wineries and that is problems getting approval on wine labels. Gary said he had a nicely detailed label but had to keep taking things off the label to finally get approved and it was a three month process. The labels have a drawing of the future White House Winery and a rooster. The reason for the rooster is the last name of Hahne means rooster in German.

White House Winery makes five wines and four of the five are made with 100% Texas grapes from the Lubbock area. Because of the label problems, the word Texas to identify a Texas wine was not put on. Now that they know the way around label issues, this should be resolved in the future. The four Texas wines are a Cabernet Sauvignon, Sangiovese-Lenoir blend, Chardonnay, and Riesling-Blanc du Bois blend. The fifth wine made from California grapes from the Lodi region is a Zinfandel. The bottles are corked and if you go for a regular tasting, you can stand at the tasting bar and for a small fee, you can taste their current five wines. 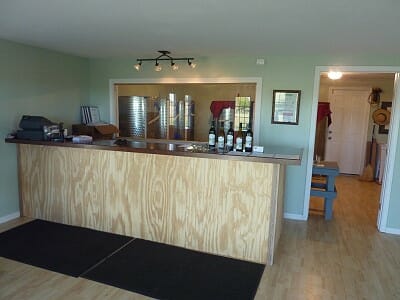 While taking a break, I met and spoke with Margo Hahne. She explained how Gary’s Opa (grandfather in German) helped during the redesign and reconstruction of Lyndon B. Johnson’s ranch house near Stonewall, TX during the 1950’s. Gary also had grown up in the Stonewall area. During the Johnson Administration, LBJ’s ranch house became known as the Texas White House. White House Winery’s name is inspired by that and they are designing their winery to look like the Texas White House. A design of what the final winery and land will look like is on the tasting room’s wall and it should be a very stunning winery.

A vineyard is scheduled to be planted in the spring of 2012 with Blanc du Bois and Lenoir. In April 2012, the winery plans to start a weekly concert series.

Overall, the evening was fun helping with the bottling, tasting some great wines, and making new friends. We will definitely make a point to visit again to watch White House Winery as they grow.