Sugar Ridge Winery opened in April 2011 and is owned by Michele and Don Andrews with Don performing the master winemaker duties. The winery is located in Bristol conveniently off I-45.

On one drive between Houston and Dallas, I tried to visit the winery but unfortunately they were closed. I made a point the next time I was making the trek between cities to stop by again. This last time when I was driving north to Dallas on I-45 near Ennis a billboard advertising the winery had been erected. What a great idea to have people learn about the winery. In fact, I met one friend in Dallas who also made the trip from Houston, and he asked if I had seen the billboard about the winery since he had not heard of it before. 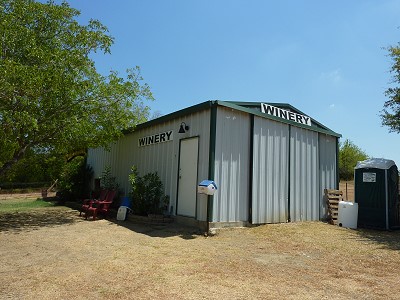 I arrived at the winery which is located behind their house and met a man coming out of the building’s side door. I didn’t really see a sign saying that was the tasting room but since he came out of there, I decided that must be it. He turned out to be Don Andrews and he welcomed me in and the room was the production room of the winery. We walked to the front of the building which was the tasting room and gift shop. I learned later that was the way to really come into the winery, so if you visit Sugar Ridge Winery, walk around to the other side of the building. The front entrance also has a covered porch with seating.

Don started my tasting as I stood at the tasting bar and he poured his wines from the uncorked bottles. There is a tasting fee for usually whatever wines they may have. First up was a Caberlot which was a blend of California Cabernet Sauvignon and West Texas Merlot. Later was a Tempranillo which was again made with California and West Texas grapes. 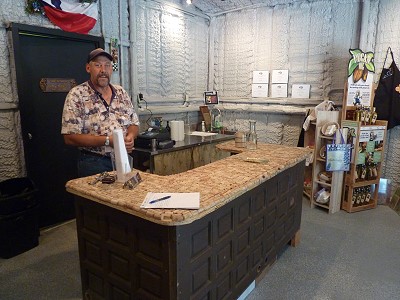 He said he uses 50% Texas grapes in his Texas wine. If Texas grapes are not used, they usually get grapes from New Mexico. Southwest Wines in Deming, New Mexico also bottles and produces some of their wines, but they are designed and labeled for Sugar Ridge Winery. It is very clear on the label where the wines come from.

Don explained he designs most of his wines to be chilled. Some other wines made are Mora Negro which is a blackberry Merlot and peach Chardonnay.

There is a small vineyard at the winery but Don said due to the draught this year, they lost most of the vineyard which was planted. It was disappointing but he said it was somewhat of an experiment too. He plans on planting all Tempranillo next March.

During the tasting Don’s wife, Michele Andrews, came in to say hello and also help with the tasting. She introduced me to a peach slush which is made with their Peach Chardonnay and a Peach Bellini frozen drink mix. It was definitely a very refreshing drink on a hot day. They also make a red slush with their Ridge Red wine and Sangria slush mix. Finally, a refreshing lemon slush was made with their Lemon wine.

A nice gift shop is available with food, clothing, and wine accessories. Sugar Ridge Winery has the tasting room available for parties, receptions, and special events. Music events are regularly held at the winery so bring your blanket or lawn chair for the music and wine under the stars. Check in advance to see what musical artists will be performing.

The next you make a drive between Houston and Dallas or are in the area, be sure to stop by Sugar Ridge Winery.

With all the web sites for your winery, why don’t you list your hours of operation?

Myrna, if you’re referring to just Sugar Ridge Winery, I didn’t see hours on their website either. I would suggest giving them a call or emailing them.