Red Caboose Winery and Vineyards is located in Meridian. The winery’s vineyards were started in 2002 by Gary McKibben and his son Evan. Gary is the owner and architect while Evan is the winemaker and vineyard manager. The winery was bonded and opened in 2004.

Their winery design philosophy was to be green. That is to create a winery which was energy efficient and sustainable. They are the only winery in Texas to cool, refrigerate, and chill with geothermal. With their geothermal cooling and photo-voltaic panels (solar panels), they are able to achieve their energy goals. They also collect rain water in tanks to supplement the irrigation of the vineyard. 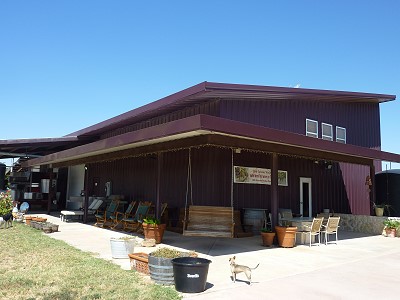 When I first arrived at the winery after driving through the vineyards, I was a little disappointed because I was looking for a caboose. Perhaps there was one there somewhere which I didn’t see. The name of the winery however came about because Gary McKibben spent weekends in a red caboose while planting the vineyards. 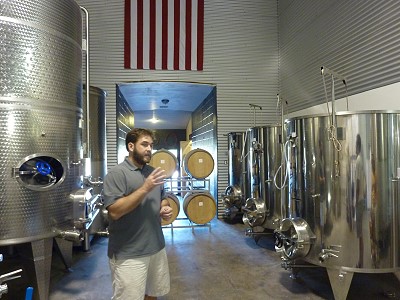 Evan led us through the production facility and gave us a tour including explaining the differences between the stainless steel tanks with the different types of jackets. We then arrived at a lower room which was the event center and it included the tasting bar, a large dining table, and a wine cellar with oak barrels. We had a choice to sit outside in a nice covered patio complete with fireplace and wood burning kitchen overlooking the vineyard or inside at the dining table. The weather was still a little hot so we decided to sit inside at the table to taste their Texas wine.

The wine bottles are corked and there is a tasting fee for eight wines which Evan poured from the bottle. He explained how the winery imports about 15-20% of their grapes but hopefully soon they will be making all wines completely from their vineyard. Red Caboose Winery and Vineyards has a vineyard with 16 acres but right now they are harvesting 10 acres. They use some grapes from California like Merlot and have a special deal with the vineyard. He gets the grapes shipped to him and makes the wine. He then sends 70% of the wine back and keeps 30% of it. He does about 20 tons of wine with the vineyard.

Red Caboose Winery does prefer to import Texas grapes though. If they do buy Texas grapes, they use grapes from the Bingham Family Vineyards in the Hill Country or from Brennan Vineyards in Comanche. The winery produces approximately 4,000-6,000 cases of Texas wine a year.

Evan commented during the tasting how people say since he works in a winery he can drink wine all the time. He said however he really is a farmer for ten months and a winemaker for two months. We tasted a very good 2009 La Reina which is a Tempranillo blend that is dry and lightly oaked. A 2009 Tempranillo/Cabernet Franc was also very delicious. Their most popular white wine is Blanc du Bosque, a wine made of course with Blanc du Bois.

The dining table where we did our tasting leads into the barrel room which Evan explained holds 500 American oak barrels with medium toast. Behind the barrel room rock wall is dirt which has been pushed up to the wall to make it underground and cooler. The winery also has a small banquet and dining accommodation with commercial kitchen. The dining is done either in the barrel cellar or on the veranda overlooking the vineyard and hillside.

There are two patios which are used for parties, dining, and entertainment. Weddings are also held at the winery. Live music is held at the winery once a month on the last Friday of the month. Red Caboose Winery also has a wine club. 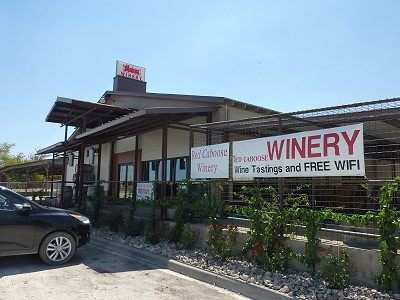 A second tasting location is in nearby Clifton which opened in December 2010. It is really like a nice wine bar which provides a deli with tapas and cheeses. You can sit at the 20 foot long tasting bar and drink the same wines which are available from the winery. 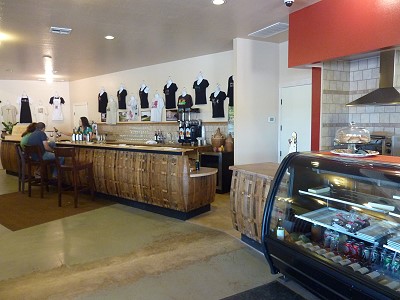 Either Red Caboose Winery and Vineyards location makes for a very nice place to try their wines, but you should definitely try and make it to the winery, especially if Evan is handling the tastings.