Previously I did a post comparing wineries we visited in NY State and Illinois with Texas wineries. I had the pleasure to have a vacation recently in San Diego as I tagged along with Gloria while she was at a work conference.

We had one day free before the conference began, so we met up with JC, a friend who we knew in Texas and had moved to the San Diego area. He had never visited a winery, being primarily a beer drinker, so he wanted to show us around to local wineries. Being nice friends, we agreed to follow his wishes.

I got in contact via Twitter with Sami (@SoCalWineDiva) who knew about San Diego area wineries. Sam (Sami) gave us a few wineries we should visit with JC. He was surprised since most people who visit San Diego head north to Temecula where there are many wineries. The few mentioned by Sam were further south closer to San Diego and JC did not realize there were so many wineries nearer to where he lived.

We met up with JC and started our trek. The first winery was Belle Marie Winery which has a building next it which looks like a castle. It was a good tasting and we tasted some wines made with grapes that we haven’t seen in Texas. This was an average size winery similar to many in Texas and there was a fee for the tasting. 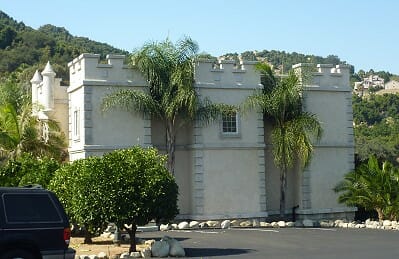 Up next was Ferrara Winery which was behind a house in a subdivision. An elderly lady greeted us and explained she had worked there for 65 years and the winery was one of the oldest in the area. This winery experience was like Texas when you go to a small winery and meet the owners, and often have a very fun experience. She was definitely a character and very fun. JC said it felt like he was a kid again back in his grandmother’s kitchen where she would say, “Now try this.” He ended up buying the first wine we tried which was a white wine in a 1.5 liter bottle for only a little over $7. Honestly it was a very drinkable wine. The non-alcoholic grape juice was fantastic. We met the winemaker, her son, who is the third generation owner and winemaker at the winery. The tastings were free.

It was lunch time and we went to Stone Brewery for lunch which is a very large micro-brewery with a large selection of beers, tours, gardens, and restaurant. I wish we had one similar near home.

Next up was Bernardo Winery which is the oldest winery in the area founded in 1889. While we were taking photos, I heard a voice that said, “You look like the person I’ve been talking to on Twitter.” I was surprised it was Sam herself. She explained her family owned Bernardo Winery and she ran the winery along with her brother and sister. On top of that she also does the marketing for the San Diego wineries (http://www.sandiegowineries.org). We went on the search for a photo location and took a photo of the four of us. After saying goodbye to Sam, we did a tasting, again very good wine. There is a tasting fee at Bernardo. The nice thing about Bernardo Winery is there are numerous types of shops in a little village setting around the winery. The winery is definitely a nice place to visit. 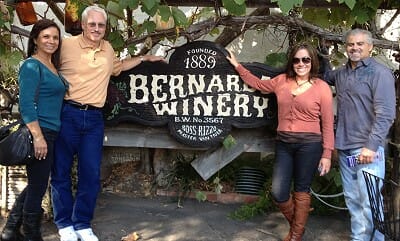 Our last winery was Orfila Winery which was more of a commercial winery. Unlike the previous wineries, a large vineyard was present as we drove to the tasting room. A wine pick up event was being held at the time with many people socializing outside enjoying the view of the vineyard. There is a tasting fee which includes the wine glass and it is paid up front to ensure people don’t sneak off amidst the large facilities. On the other side of the tasting room is storage for their barrels. The wine is poured from the bottle and a generous amount is given. We had a lot of fun and ended up closing the winery at 6pm. 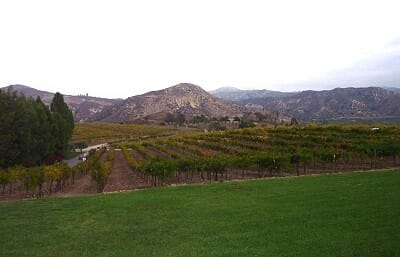 I had some free time on the day before we left San Diego so I decided to visit one more winery by myself. I chose Carruth Cellars Winery on Cedros located in Solana Beach. When I arrived at the winery there were a number of tubs holding grapes and I was told they were in the middle of pressing the various varietals. 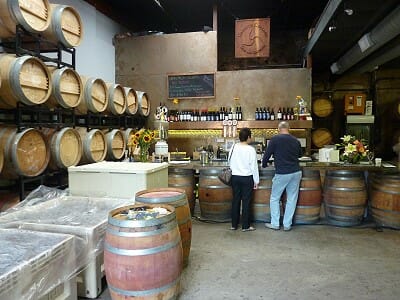 I went into the tasting room where another couple already was and the gentleman from outside came in as it turned out he was also handling the tastings. I learned he was Adam Carruth, the owner and winemaker of the winery. This was the first time I have been to a winery where the winemaker is doing a pressing and also handling the tastings at the same time. He had just pressed one variety of grapes and was in the process of cleaning the presser for the next variety. It was around 3pm and he said he would probably be there until 9pm. 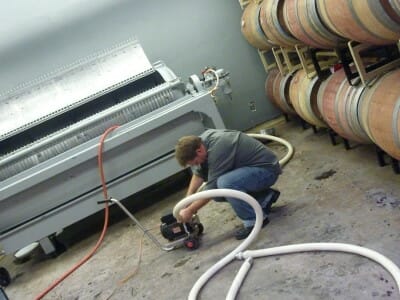 There is a tasting fee and the tastings are poured from the bottle. Carruth Cellars has a couple white wines but mostly make red wines. The smaller selection of white wines was also common at the other wineries we visited. Carruth Cellars makes an awesome port which the couple previously there also agreed as they purchased a bottle.

Carruth Cellars gets their grapes from different areas of California. Most of the other wineries we visited do the same including getting grapes from Mexico. The California wineries do not have to worry about using California grapes and possibly getting ridiculed like Texas wineries sometimes do.