We attended the Montgomery Wine and Music Festival last year and had a great time tasting the Texas wine from the numerous wineries which were present. As a result of volunteering at this year’s Old Town Spring SpringFest, we decided to volunteer at Montgomery too. We received the information prior to the day, September 17, and were going to help pour for a winery from 1:00pm-3:00pm.

The volunteer schedule had us working together for a Texas winery but previously Gerald Jones from Los Pinos Ranch Vineyards had requested for us to help him. Fortunately when we arrived to check in for the day, we were told we could switch to the Los Pinos table so we headed to the wine tents.

Let me back up a little bit. Friday night I received a tweet on Twitter at my old Twitter address from Billy Cox Jr., owner of Retreat Hill, saying, “our wine in Houston and Austin Spec’s store. Come by and visit us tomorrow at Mont wine and music festival.” Retreat Hill was the first winery we blogged about and Billy didn’t know about my new @TXWineLover Twitter address. He was also unaware we were volunteering at the wine festival. I replied in the morning when I read the tweet that we would be volunteering and see him there.

Later on at the festival after we saw Billy a few times, we found out from Billy what actually happened the previous night. He walked over to Steve Morgan from Saddlehorn Winery, laughing, and explained to us the two of them were drinking the previous night and somehow my name and blog came up. He decided he would tweet me right then and there, and in turn was hoping for me to retweet it (“social media,” he said) which I did do on a later tweet of his about the Montgomery Festival. It was a perfect example of social media at its best. 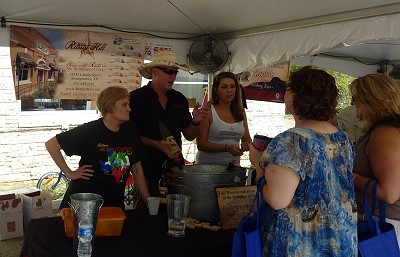 At the time of our shift, Gloria and I went to the Los Pinos table where Gerald Jones instructed us what we needed to do while pouring. It wasn’t long before customers came to the table and were ready for tasting the Los Pinos Texas wine. All 16 wineries were allowed to bring two types of wine. Los Pinos had brought their Grand Reserve Meritage, a blend of 80% Cabernet Sauvignon and 20% Merlot, which was a Lone Star International Wine Competition medal winner. The other wine they brought was Sweet Rodeo Red. For those asking for wines, the sweet wine was obviously Sweet Rodeo Red and the dry was the Grand Reserve Meritage.

We initially had questions like “how dry is it” or “how sweet is it?” Unfortunately we had learned what we needed to do to pour but we hadn’t had a chance to taste the wines to be able to answer those questions. We quickly resolved that problem. We often were asked if there was a white to taste and were sorry to tell them there were only the two reds present. We then directed them to Rancher’s Daughter within walking distance where they could get other Los Pinos wines.

Last year the day was very hot, however the weather was beautiful this year. Wind did come up at one point and started blowing things off tables. Fortunately Gerald had most of the items on the table taped down so we didn’t have problems. But at a neighboring table, someone had put their wine glass down to get their tasting and the wind slid the glass across the table causing it to fall. Fortunately it didn’t break.

The three of us were handling the wine tasters at a nice pace. It wasn’t too crowded or sparse, just a nice flow of traffic coming to the table. Gerald had to take a nature break at one point so Gloria and I were left to man the table. I’m not sure how the volunteers who were alone would be able to handle it without the tasters backing up and perhaps giving up on trying any of the wines at the table. I think Gloria and I made a good team and we kept the pouring working well. 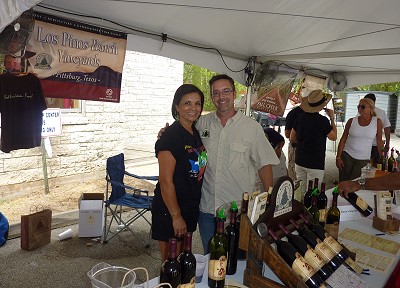 One of the funniest things happened to Gloria. An older gentleman who was with a woman came to her to do a tasting for the two of them. He later came back by himself with one glass. Gloria recognized him and said, “Welcome back. Would you like another tasting?” He said he wanted a double tasting this time. Gloria said, “Oh, you like it.” His reply was, “No, I want to get her happier before I get her home!”

Without a doubt, the Grand Reserve Meritage was the hit of the table. A lot of people who said they don’t like dry wines or even some who only like white wines tried it, and the expression on their face and comments were often, “Wow that is good.” We often got requests on where they could buy a bottle of it and fortunately a tent was available where people could buy any of the wines at the festival.

Our 3:00pm shift ended but our replacement volunteer had not yet arrived and even though Gerald said we could leave, we said we would stay and help. The Montgomery Festival people were also appreciative. Our replacement showed up at 3:30pm so it was our turn to be a wine taster and make the rounds. 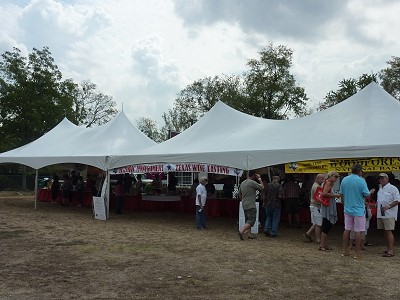 Out of the wineries which were present, we have visited all except Sunset Winery so we had to try both of the wines they brought. At their table volunteering was also Ron Saikowski, a wine columnist for many newspapers and magazines, who I had previously commented with on Facebook about meeting at the festival. We had a nice conversation while Ron poured the Sunset Winery wines for us and explained about them.

We finished our round of the winery tables, stopped in to say hello to Rendy Kerr from Rancher’s Daughter, and took the shuttle back to the car. It was a nice day and we vowed to volunteer again at next year’s festival.