CrossRoads Winery is located in Frisco and is owned by Bob and Darlene Leiker. The winery was originally opened in 2005 and then purchased by the Leikers in 2010. The previous winemaker, John Otis, continues to work at the winery making Texas wine.

The problem we had though, especially in the dark, was trying to find the winery. We set our GPS to the address and in the dark we were led down a driveway which ended in front of a house. We knew it was wrong so we resorted to the dreaded phone call to the winery, “Where are you located?” We were given directions and headed further down the road. We thought we had gone too far and turned around. Once again even though I didn’t want to (I’m a guy – I don’t ask for directions), I called again to find out where they were. We finally found the winery and can understand why we didn’t recognize it from the dark road. We were looking for a separate building and CrossRoads Winery is the end building in a set of warehouses. 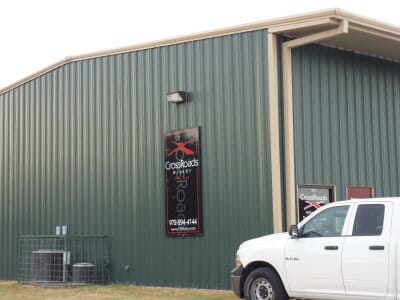 Darlene handled our wine tasting and it didn’t take long to learn she is a lot of fun. She is originally from the Houston area so we had that in common too. Her husband Bob was busy with other customers but did stop by to say hello earlier and later visited with us too. As most wine folks are, they are a very friendly and cordial couple. 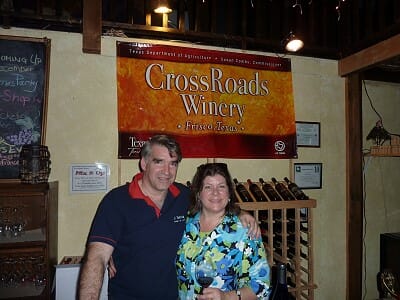 Darlene poured the tastings from the previously corked bottles. There is a tasting fee for 5 wines or a higher tasting fee for all of CrossRoads Winery’s Texas wines (14 the last time I visited).

While enjoying the different CrossRoads wines, a musician was performing in the corner of the winery. Darlene explained every Friday night is live music night at the winery. Since it often gets crowded on Friday nights, reservations are recommended.

There is a nice selection of food from which to purchase to either eat during the tasting or later while enjoying a glass of wine and listening to the music.

We were enjoying our tasting when Darlene asked us if we ever had a jalapeño shot. We were confused and said no. She asked if we liked jalapeños and Gloria replied that she did. For me, if it’s not too hot I can handle it. Darlene said it was the best part of Friday nights for her as she could do them along with the customers. She then explained the shot to Gloria. A jalapeño shot is a glass with a small amount of CrossRoads Winery’s Sunfusion wine. Sunfusion is a blend of Chardonnay, Sauvignon Blanc, and Muscat Canelli. A candied jalapeño pepper is then placed into the wine. The object is then to pour it all in your mouth but not swallow anything, chew the jalapeño , and then swallow both the jalapeño and wine at the same time. 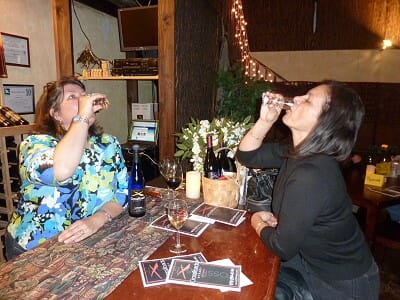 Gloria was a trooper and did the shot with Darlene. They of course then wanted me to try it. They promised it wasn’t too hot so what the heck, you only live once. Darlene served up another round for the three of us and we all did the shot. I have to admit it wasn’t that hot and it was actually pretty good. I keep asking Gloria when we see candied jalapeños in stores now if she wants to buy some.

The rest of the evening was just as much fun drinking wine and talking with Bob and Darlene. Darlene mentioned they have In Home Wine Tasting Parties where she will bring the wine to your house. The party can be purchased for $99 for 2 hours of fun. Since Darlene occasionally makes trips to Houston, we are definitely keeping the party idea in the back of our minds.

We said our goodbyes as we closed down the winery and vowed we would come back the next time we were in the Frisco area. Gloria has not had a chance to re-visit but when I went to Dallas to attend a conference, I had to make sure I stopped in on the Friday night. 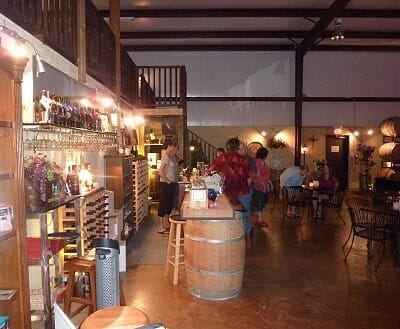 I had arranged with fellow wine blogger Dave Potter of The Grapes Around Texas blog to meet him for the first time at the winery. Since he lives in the area, he is good friends with Bob and Darlene and a frequent visitor at the winery. He warned them I was coming and ensured we had a reserved table waiting.

When I arrived, Darlene met me at the door and even though it had been months, it was like Gloria and I had recently visited. I decided I wanted to do a full tasting and this time Bob handled the tasting. Dave had not arrived yet so Bob and I had a great conversation about various topics including, of course, wine.

CrossRoads Winery gets most of their grapes from Generation Grape Growers in Seymour, Texas owned by Larry and Pattie Bratcher, and also from Square Cloud Winery in Richardson, Texas owned by Jackson Anderson. Later I was introduced to Jackson Anderson who had arrived and he has an interesting vineyard. He is experimenting with different types of grapes and currently grows nine red grape varieties and four white grape varieties. The winery is not open yet but I will definitely arrange a tour of the vineyard the next time I am in the area or perhaps even visit the winery at that time if it is open.

Dave Potter arrived and he, Bob, and I had a fun time talking and drinking wine the rest of the evening. The idea of the jalapeño shot came up and surprisingly Dave had never tried one. That meant there was no doubt we were going to do one. Darlene set us all up and we proceeded to do the shot. I had a little problem this time because I drank the wine accidentally first. I don’t know what happened to Dave though as he suddenly lurched back from his chair and started coughing. Of course that brought laughter and the poor guy received the brunt of harassment the rest of the evening from one of the winery workers. What a great sport he was though. 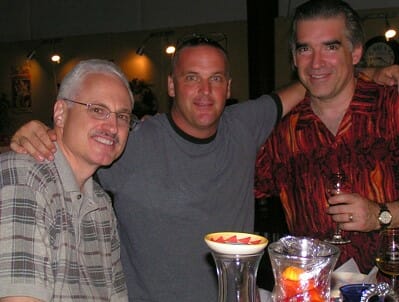 I closed the winery again (do I detect a trend here?) with Dave and the others, and we all bid each other a fond farewell.

If you are ever in the Frisco area, you definitely need to stop by CrossRoads Winery for a fun time, especially on a Friday night while you can enjoy live music. CrossRoads Winery is part of the Munson Wine Trail.