CALAIS Winery is located in the Deep Ellum neighborhood of Dallas and is owned by Benjamin Calais, a French winemaker, who uses traditional French techniques while making his Texas wine. The winery was first opened in October 2008.

The boutique winery is very easy to find among the Dallas streets and is the corner building in its location. The first time we visited CALAIS Winery we walked in and there was a group of people at a table being attended to by Ben. We had previously seen Ben at his booth when we attended the 2010 Montgomery Wine Festival so we recognized him. A woman was behind the tasting bar, who turned out to be Ben’s wife, so we proceeded to sit at the tasting bar.

She started us on our tasting and Ben came over to say hello. We had a fun time doing a tasting and had an enjoyable conversation with Ben and his wife. 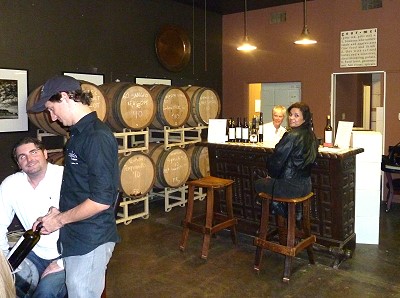 There is a fee for tasting five wines and the tastings are poured from the previously corked bottles. They do not provide food but you can order from local restaurants or bring your own to the winery.

CALAIS Winery makes mostly red wines but also makes a delicious La Cuvee du Saule with 100% Texas Muscat grapes. In the Muscat, brandy is added just to get the alcohol level but that stops fermentation. No sugar is added. That is the only way they do it in France since they are not allowed to add sugar, and Ben follows the same French techniques.

There is a wine club at CALAIS Winery. There is a flat fee for two bottles every two months plus there are other benefits. Personalized wine labels are available. The winery also hosts private events such as private wine tastings, birthday parties, and corporate events.

We had a nice visit at the winery and looked forward to visiting again. It was a number of months later but the last time I was in the Dallas area, I had to stop by and visit CALAIS Winery. As I pulled up to the winery, I was kind of worried since Ben was leaving with a cart holding boxes to mail and I thought I lost my chance to visit. But as I was taking photos outside, he unlocked the door from the inside (I assume he entered from the back of the winery) and my worries were gone. 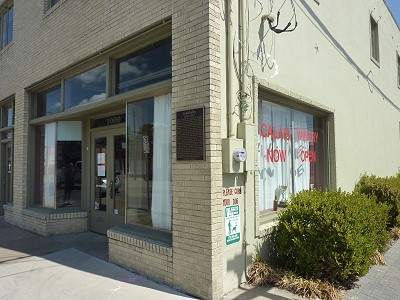 I saw Ben’s previous tweet on Twitter how he had Sangiovese from Newsom Vineyards fermenting and the winery smelled like bubble gum. Sure enough, even though it was not a strong smell, it did smell like bubble gum.

I proceeded to do a tasting to see what was new and learn some recent information from Ben. He said they use 80%, sometimes 100%, Texas grapes but it really depends on the year. If he does have to get grapes from out of state, he uses grapes from Washington. Their Syrah in 2009 used non-Texas grapes.

Ben said the Roussanne grape will be used in the 2010 wines. At the time of my visit, they were waiting on the bottle label. If you are from Texas, you know rain has been scarce in 2011. He said the lack of rain produced small berries. This meant there would be more skins and could be less wine, but still would be very good. I was hoping to try their Chardonnay, but they do not make it anymore.

CALAIS Winery gets their wine barrels in California since that is where the coopers are located. Since the trucking expenses cost almost as much as the barrels do, he goes in with other wineries to get the barrels and ends up saving money.

Once again, I had a great time talking with Ben, drinking his wine, and I was glad I stopped by. I would highly recommend if you are in the Dallas area to stop by CALAIS Winery and visit Benjamin Calais to enjoy his French style wine.

CALAIS Winery is on the Dallas Wine Trail.