Tasting the Town presented by The Gold Exchange was held in the Humble Civic Center in Humble, TX on Thursday, September 22nd. The event brought the Lake Houston area’s local restaurateurs, chefs, caterers, musicians, wineries, breweries, and other vendors together to show off their wares. This was the third year of the event and every year it has grown more popular with this year’s event being 30% more than last year.

I arrived shortly after the event started and there were already quite a few people there. I picked up my wine tasting glass (did you think I was going just for the food?) along with five wine tickets. I was surprised when I was also given two beer tickets. 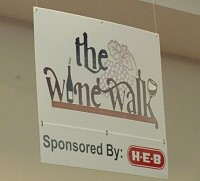 I started making my way through the booths and tried to get my bearings. I was given a goody bag but there was not a map of the layout in it. Previously when looking at the website there was a map so I had a general idea where things were going to be. In the front of the civic center was a door leading to an outside grilling area for those booths that needed to grill their food. I decided to check that out later.

There were a couple food booths with free samples in the front and of course those were the first ones hit by people. There were delicious egg rolls, quiche, and other items from a catering company and the second booth was a pastry chef with delicious cakes on a stick, cinnamon rolls, etc. This was going to be good.

I reached The Wine Walk and there were tables from HEB with Californian, Chilean, Italian, and other world wines. The Texas wineries present were Messina Hof, Texas Legato, Pleasant Hill, and Fall Creek. What did I use my tickets on? For some unknown reason, most of my tickets went to the Texas wineries.

I used up my wine tickets and then decided to use the beer tickets. In the Wine Walk area there was a beer booth at the front and one at the rear. I gave my ticket to one booth and was surprised when I received a full bottle of beer as I was expecting just a tasting. There were a lot of food booths ahead and I didn’t want to get full on beer, so since I previously had the beers from the other booth, I gave away my other beer ticket.

While going through the food booths, suddenly a beer booth would appear. Now I wish I had saved that other beer ticket. This is where a map of the layout would have been VERY helpful. It at least should identify where the different drinking booths are as I later discovered more when I went outside to the grilling area. 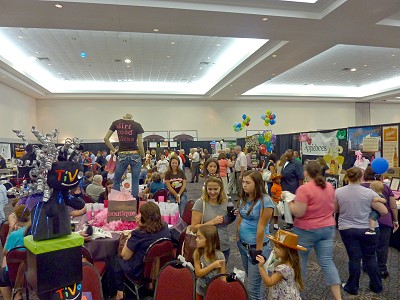 The food booths were incredible with many of the local restaurants offering samples of their food. I had to start picking and choosing which food to sample since I was getting full already. Coupons for free food, wine, and other goodies were given out by the booths. My only problem was trying to hold my goody bag, wine glass, etc. and try to eat samples with two hands. There were tables in the wine area and at the other side of the civic center and I took advantage of them when I had a chance.

On the way out, I visited the outside grilling area which had food and beer booths in addition to live music. For the price of the ticket, you definitely get your money’s worth with the number of wines and beers to try, not to mention the amount of food you can sample from local businesses. I definitely plan on attending next year’s Tasting the Town.

Thanks Jeff – so glad you could make it out; and enjoyed yourself. Duly noted on the map request! 🙂